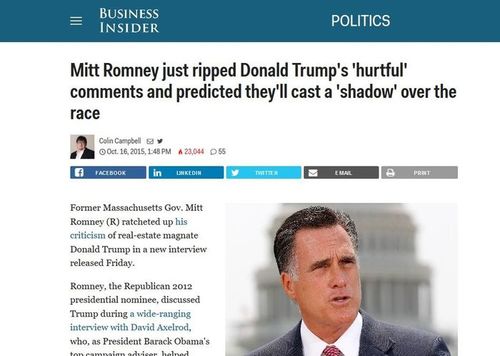 Mitt Romney was not the worst of the bunch in the 2012 election. He was fairly solid in the lead up to the vote, strongly supported mandatory E-Verify, and said he would end the lawsuit against Arizona's SB 1070. Based on this,  Ann Coulter said Romney was worth voting for, maybe even in 2016. Yet by our overall standards, Romney was still an immigration wimp, strong only because of how milquetoast the rest of the field was. And whatever fortitude he showed in the election collapsed after his defeat, as Romney has gone out of his way to shill for amnesty and concern troll about "tone."

In the latest example of the Decline and Fall of Mitt, 2012's loser had an interview with Barack Obama's strategist David Axelrod (!) and intoned the following:

I think Donald Trump has said a number of things which are hurtful — and he has said that they were 'childish' in some respects — and I think [they] will be potentially problematic either in the primary or a general election," Romney said.

Speaking with Axelrod, Romney further predicted that Trump's heated remarks about illegal immigration could create obstacles for whomever their party nominates next year. Trump frequently accuses the Mexican government of sending "rapists" and other criminals across the US border.

"Donald Trump has a big megaphone, and I think that some of the things he's said, particularly about Hispanics, will be problematic — certainly for him if he were to go to the next stage — but for whoever our nominee is," Romney said.

However, Romney suggested that former Florida Gov. Jeb Bush (R), who has a Mexican-American wife and speaks Spanish, and Sen. Marco Rubio (R-Florida), a Cuban-American who is also fluent in Spanish, could deflect those concerns among Hispanic voters in the general election.

"Now, if our nominee happened to be someone like Marco Rubio or Jeb Bush, who have strong Hispanic roots themselves and connections themselves, that might not be as big an issue. But if it were someone else who didn't have those connections, why, it could probably remain as a shadow over their campaign," he said.

There's something nausea inducing about displays of weakness. I can't help but feel a little sick to my stomach every time Jeb Bush minces up to the microphone to beg Hispanics to like him and plaster that sickly, pleading grin on his face. But this might be even worse. Let's break it down. What Romney is showing here is that he accepts the leftist frame on racial politics. Republicans are supposed to appeal to minority voters as members of minority groups. But because minorities qua minorities (even Asians now) are now defined by their status as victims of racist whites, the only way Republicans can approach them is apologetically. The GOP tries to compensate with vague "pro-growth" rhetoric about capitalism and opportunity but most non-whites want more government intervention in the economy, regardless of the late Jack Kemp's fantasies or how many times the increasingly pathetic Rand Paul calls himself a "Detroit Republican."

Thus, tone policing like Romney is doing here doesn't actually do anything to win minority voters. It simply comes off as condescending. Republicans simultaneously appear weak and cynical, seemingly trying to pawn off minorities with some cheap rhetoric.

In contrast, Trump is appealing to nonwhite Americans as Americans. And while many racialized Hispanics, blacks, Asians, Jews, and self-hating whites are disgusted by this appeal to an inclusive but still implicitly white American identity, there are probably more nonwhites who are willing to get behind a pro-American, anti-immigration candidate than there are nonwhites who care about "enterprise zones" in urban centers.