GOP "Strategists" Don't Get It About Trump Victories—It's The Immigration, Stupid!

The cluelessness of the GOP pundit class is infuriating, but may ultimately be our salvation. Nothing they say about anything is ever right, even accidentally.

This is making the TV news shows resemble Monty Python's "Upperclass Twit of the Year" contest. The twits don't notice the starting gun, run into one another, fall down, run themselves over with their own cars and, then, the remaining contestants all shoot themselves in the head. 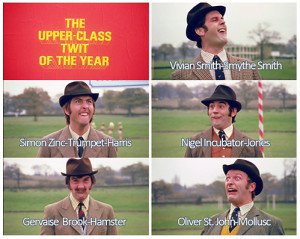 Anyone who talks about politics on TV isn't going to win them all, but when your horse takes a dump in every single race, week after week, why should we listen to you next time?

If you tuned into ABC'S "This Week" the morning after Trump's tremendous victory in South Carolina, you'd find George Stephanopoulos promising analysis from a "powerhouse roundtable," by which I assume he was referring to the table itself.

He then turned to the sort of clueless morons who have gotten everything wrong for the past seven months so they could tell viewers "what's next."

I've picked these two "Republican strategists" at random for reasons of efficiency, but it could have been any of the Karl Rove-Matthew Dowd-Steve Hayes-Hugh Hewitt-George Will-Rich Lowry dream team.

Prepare to be dazzled by the analysis!

If you cut out words from a magazine and randomly pasted them on a piece of paper, you would produce a better analysis of what is happening in this election than anything said by Fagen.

You will find the exact same idiocy on any other political program. For hours of fun, take a week off, call in sick, and search Nexis for the words, "Republican strategist" and "Trump."

Chimps throwing darts at a dictionary would be right more often. Why are these people still allowed in the building? The FCC ought to force the TV networks into a massive settlement for promoting snake oil salesmen.

If I were a career counselor, I'd tell my students to become "Republican strategists." You can be terrible at what you do—and the phone will never stop ringing! In no other profession, even fields that require a fair amount of speculation like oil wildcatting or weather forecasting, can you be so consistently wrong and never lose work.

After Trump's huge victory in New Hampshire and then in South Carolina, did it occur to TV bookers to call any of the people who got it right?

Alex Marlow, editor in chief of Breitbart News, explained everything that was about to happen in this race back on the Sept. 14 edition of CNN's Erin Burnett show.

While all the other "strategists" gibbered about Trump losing the Hispanic vote, Marlow said: "Trump is growing the big tent. ... Trump's policies are appealing to blacks. There are even some polls out there, like a survey USA poll, saying Trump is actually doing fine with Latinos."

In one of the few times you might have heard this point expressed on television airwaves, Marlow said that the No. 1 issue for Breitbart News' 20 million readers, "has consistently been—since last year—immigration. They are looking for someone who is going to seal the border and prioritize border security as No. 1."

Obviously, Marlow was right about everything. According to Nexis, that was the last time he appeared on TV.

It would be as if, after discovering America, Christopher Columbus reported back to the King and Queen of Spain, but the booker for Ferdinand and Isabella decided that, instead of Columbus, she'd get the guy who never actually set sail for the New World because he was afraid he'd fall off the edge of the Earth into a fiery pit.

Fantastic—that's great. You're going to be our go-to expert on the discovery of the New World. Can you be here early Sunday morning?