Sure, Establishment Ed Gillespie Didn’t Run On Trump’s Agenda. But Trump Isn’t Enacting His Agenda Either 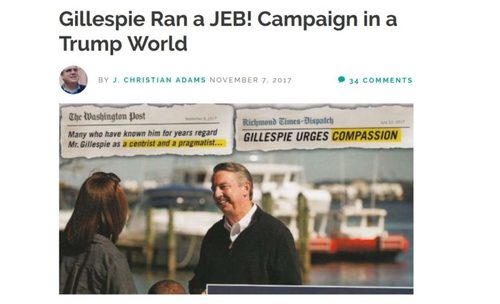 For immigration patriots, there’s a Narrative in place to explaining the crushing defeat of the GOP throughout Virginia on Tuesday night. “Establishment Ed” Gillespie, whose entire life story is a kind of Pilgrim’s Progress illustrating the utter pointlessness of the Beltway Right, didn’t push the Donald Trump agenda and so Trump’s voters didn’t turn out. True—but insufficient. A more disturbing explanation must be faced: President Trump has energized the Left but he’s not energizing the working-class voters who gave him victory—because he is not sufficiently delivering for them.

This is not to say Trump is responsible for Gillespie’s defeat. True, Gillespie, incredibly in view of his record, did flirt with immigration patriotism by highlighting opposition to Sanctuary Cities and MS-13. But even the victorious Democrat Ralph Northam was declaring he was opposed to Sanctuary Cities by the end of the campaign. And a half-hearted stab in the Culture Wars isn’t unusual for Gillespie: he declared his support for keeping the  “Washington Redskins” logo in his doomed Senate run. But in general, Gillespie ran a typical GOP Establishment campaign.

The results were not surprising. Gillespie lost by a far greater margin than Ken Cuccinelli did in his achingly close 2013 effort, as well as by more than Trump did in 2016 [GOP Establishment Failure: Gillespie Lost By More Points Than Trump, Cuccinelli in Virginia Elections, by Sean Moran, Breitbart, November 8, 2017]. Trump won 1,769,443 votes in Virginia, while Hillary Clinton had 1,981,473. Gillespie only took 1,174,650 votes compared to Northam’s 1,407,829, bleeding far more Trump voters than Northam lost Clinton voters. Gillespie lost 594,793 Trump votes; Northam only lost 573,644 votes from a higher number.

As the Washington Post gloated, Northam even managed to surpass Clinton’s vote in Hampton Roads and Central Virginia, and he won Northern Virginia by a greater margin than did President Barack Obama in either of his presidential campaigns [An enthusiastic, more polarized electorate gave Northam the win, by Dan Keating and Kevin Uhrmacher, November 8, 2017]. The same Post article showed the Republicans continue to win rural areas of the state by ever greater margins.

However, as Vox’s Seth Masket documents, the numbers of white, rural votes were not anything close to what President Trump was able to achieve  [Rural white voters didn’t show up for Virginia’s election, November 9, 2017]. Turnout in rural Southwest Virginia, a GOP stronghold, was poor compared to the rest of the state [SW. Va turnout trails much of state, by David McGee, Bristol Herald Courier, November 8, 2017].

Further support for pinning the defeat on “Establishment Ed”: Lieutenant Governor candidate Jill Vogel and Attorney General candidate John Adams both did better than Gillespie, and about as well as Trump [5 Takeaways On Virginia’s Election Sweep For Democrats, by Mollie Hemingway, The Federalist, November 8, 2017].

Patrick J. Buchanan, in his autopsy of the GOP race, declared Republicans can’t afford to move away from President Trump both because his voters are “indispensable” and because “a house divided cannot stand.” Yet Buchanan also said Trump’s voters are insufficient to win a statewide race, especially as the Democrats are now focusing more technology, logistical support and GOTV efforts on local races.

The bottom line: Donald Trump has energized and united Democrats. The recent Pew breakdowns of the two major political parties showed an astonishing 99% of “Solid Liberals,” by far the largest component of the Democrat Party, are opposed to President Trump. Northern Virginia is no longer competitive for Republicans. Southside Virginia was not motivated enough to make up the difference.

Some Republicans are shrugging that Virginia is now a “blue state,” largely thanks to immigration, and therefore, Gillespie’s defeat was basically expected [Bannon warns GOP fight for country far from over, WND, November 9, 2017].

But this is a simplification. Hispanics were only 6% of the electorate. Northam’s increasing his share of the female vote even above what Hillary Clinton was able to win was far more significant and the usual monolithic black vote indispensable to the Democratic victory [Exit poll results: How different groups of Virginians voted, Washington Post, November 8, 2017].

The GOP’s real problem is the white vote (as in California). Gillespie got a 57% share, which while a solid victory is low for a Southern state—for example, Trump got 63% in neighboring North Carolina—and in fact is about what Trump got nationwide in 2016.

And two major points in the Virginia exit polls should be keeping Republicans up at night:

The Congressional GOP’s master strategy of trying to destroy Obamacare by letting premiums increase, is, not surprisingly, tearing down statewide and local candidates who have almost no control over this policy. Twice as many people said expressing opposition to Donald Trump was a reason for voting as did those who said they were voting to support the president. Thus, those opposed to Trump are turning out while the rural voters he won over in 2016 are not.

Lip service to immigration patriotism and Culture War gestures such as defending Confederate monuments are not enough to combat these trends. (For those who identified “immigration” as the most important issue, presumably either for or against, Gillespie won decisively, for all the good it did him). Trump has been delivering, at least somewhat, on immigration. But that isn’t enough for his voters.

What Trump has really been executing is something like “Conservatism Plus.” It’s the Paul Ryan agenda, only with more emphasis on immigration enforcement, a greater willingness to take on the Culture Wars and violate PC taboos and a combative attitude towards the Main Stream Media. This is all very well, but it doesn’t really provide working class voters a reason to turn out enthusiastically. The Conservative Establishment’s insistence that “tax cuts” will solve these problems is also a pipe dream [Taxes won’t work for Trump. Trade and Immigration Will, by Peter Brimelow, Daily Caller, April 4, 2017]

As the Pew analysis of the GOP shows, “Market Skeptical Republicans” are now one of the largest factions in the GOP. This is not the time to double down on making sure the likes of George Soros and Mark Zuckerburg have more money to donate to far-Left causes.

Instead, President Trump and the Republican Party need to start breaking up the Democrats’ unwieldy Coalition of the Fringes and giving their own supporters reasons to turn out.

Some things they could do tomorrow:

These are issues which would not divide the party and simply require a modicum of courage and political skill. (Of course, I expect nothing from The Stupid Party, but one can dream.)

The larger problems surround trade, and, above all, health care. President Trump has actually delivered, to some extent, on the economy, which is booming. Manufacturing is up [U.S. Manufacturing Powering Up, Regional Report Cards Show, by Vince Golle, Bloomberg, October 31 2017].

But the GOP has already failed repeatedly to repeal Obamacare.  This is because the approach was, as Ann Coulter memorably observed, not by allowing a free market in health care, but by trying to tinker with an inherently flawed system.

Though most conservatives disagree with me, I believe even a single-payer system would be preferable to what exists now. A free market approach would also be better. Doing nothing, admitting defeat, and fully funding subsidies until circumstances change wouldn’t even be a bad idea politically.

But what is certain is that the current approach of bragging about “letting Obamacare implode” and allowing premiums to increase is a recipe for political disaster. The inability of Republican leaders to see this beggars belief.

“Trumpism” can’t simply be mild restrictions on immigration, trash-talking on Twitter, and business as usual when it comes to taxes. It has to be a concerted effort to support the American working class and to dismantle multiculturalism, pushing policies majorities of Americans agree with and that Democrats can’t afford to oppose.

The elections in Virginia are a wake-up call. The GOP needs to act with a sense of urgency. Telling Republicans to stick by President Trump is a start, but it is not enough.

It’s time for President Trump to stick by his voters in rural America and the Rust Belt who put their faith in him.