Can Virginia immigration patriots trust Ed Gillespie—the veteran Treason Lobbyist and GOP Bushite who has dramatically gotten religion on culture and immigration—if he defeats Democrat Ralph Northam, a pro-abortion, pro-immigration pediatric neurologist now serving as lieutenant governor, to become governor on November 7? Or will he revert to a typical pro-immigrant, I-need-my-underpaid gardener Chamber of Commerce Republican? IT DOESN’T MATTER.  Gillespie’s remarkable newfound zeal is yet more evidence that, incredibly and perhaps inadvertently, Donald J. Trump is winning the war to make the GOP a National Conservative party.

Democrats and their Main Stream Media allies pointed and spluttered, using the usual scare quotes—as if observing that Northam has his own Willie Horton is a bad thing.

As if that ad weren’t enough, Gillespie also accused Northam, who says he twice voted for George W. Bush, of favoring Sanctuary Cities for illegals, then attacked him for backing down to the Leftists who want to erase the Old Dominion’s history by pushing over statues honoring storied Confederate heroes, such as Robert E. Lee and Stonewall Jackson. 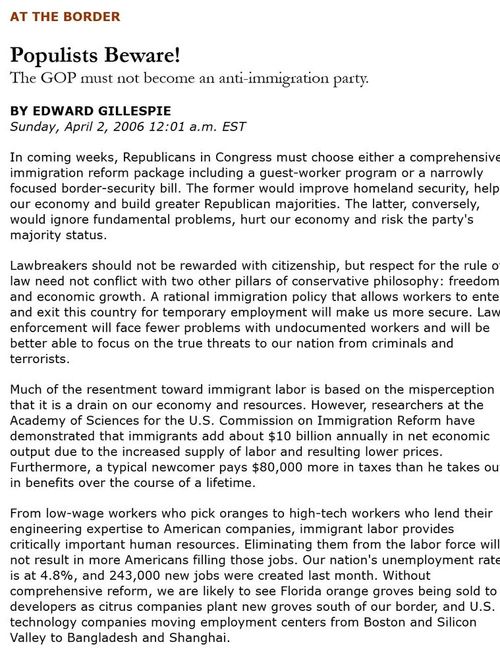 This appeal to Trump’s base in Virginia is all fine and good. But Gillespie is still the ultimate Republican Establishmentarian. He worked for Bush 41 and Bush 43, and has made buckets of money as a pro-immigration lobbyist for Big Business.

Consider this opening line from an Ed  Gillespie  op-ed in The Wall Street Journal in 2006:

In coming weeks, Republicans in Congress must choose either a comprehensive immigration reform package including a guest-worker program or a narrowly focused border-security bill. The former would improve homeland security, help our economy and build greater Republican majorities. The latter, conversely, would ignore fundamental problems, hurt our economy and risk the party's majority status.

Populists Beware! The GOP must not become an anti-immigration party, April 2, 2006

Then there was this:

Populists offer a different immigration plan: Build a bigger wall. I understand why this message resonates, but it will prove shortsighted. The California GOP struggles today because of what Hispanics saw as an assault on them more than a decade ago by then-Gov. Pete Wilson. In Virginia, Republican gubernatorial candidate Jerry Kilgore ran last-minute anti-immigration ads that didn't move his numbers with swing voters and probably cost him important votes in the Hispanic enclaves of Northern Virginia. Anti-immigration rhetoric is a political siren song, and Republicans must resist its lure by lashing ourselves to our party's twin masts of freedom and growth—or our majority will crash on the shoals.

The Republican Party cannot become an anti-immigration party. Our majority already rests too heavily on white voters, given that current demographic voting percentages will not allow us to hold our majority in the future. Between 2000 and 2004, President Bush increased his support in the Hispanic community by nine percentage points. Had he not, John Kerry would be president today.

Hispanic voting percentages are increasingly decisive in swing states like New Mexico, Nevada, Florida, Colorado and Arkansas. Mishandling the immigration debate today could result in the Republican Party struggling in these states and others in the same way it now does in California. People who come legally to this country with nothing and labor in the most menial ways to get a new start should feel at home in our party. As a rule, they are hardworking, law-abiding, freedom-loving and patriotic Americans. [Emphasis added].

Um, no. Donald Trump proved Gillespie wrong—as did the two previous GOP Presidential losers who thought Hispandering would get them an address change to 1600 Pennsylvania Avenue.

You might think Gillespie figured that out on Nov. 8, 2016, when the Trumpocalypse vaporized the GOP Establishment.

And he might have gotten something of a clue. But he didn’t turn hard right on gangs and culture until the same voters who put Trump in office nearly handed victory in the GOP gubernatorial primary to Corey Stewart, the hard-as-nails conservative from Prince William County whose effort to out-Trump The Donald got him fired from the presidential campaign.[ You’re Fired: Trump campaign dumps Virginia state chair Corey Stewart,  By Sean Sullivan and Laura Vozzella, Washington Post,  October 10, 2016 ]Stewart came within 5,000 votes of defeating Gillespie in the GOP primary, and without spoiler Frank Wagner in the race, might have won. Wagner took 50,000 votes.

Stewart should not have gotten that close, at least by the reckoning of standard GOP strategery. A look at the map in The New York Times shows how strong Stewart’s effort was and why.

Gillespie won the most liberal parts of the state, which is exactly where Northam will pile up the votes next week. The contest for the GOP’s lieutenant governor’s race followed the same pattern: Jill Vogel won Northern Virginia and Tidewater. Bryce Reeves won the rest of the state where real Virginians live.

But 5,000 votes were way too close, and it apparently taught Gillespie a lesson: He better get tough on the issues that patriotic Virginians care about—immigration and the culture war.

The leftist New Republic explained it this way in an article that’s worth reading:

Gillespie was a reluctant convert to Trumpism. In 2014, he narrowly lost a Senate race while running a pro-immigration, pro-growth campaign, along the lines of the autopsy report that Republicans produced after Mitt Romney’s loss in 2012. In the 2017 primary, he came across as a man out of time: He avoided cultural and social issues, emphasized a large, across-the-board tax cut, and produced ads in both Spanish and Korean. But he also nearly lost to Corey Stewart, a local firebrand who was too radical even for the Trump campaign and ran primarily on protecting Confederate monuments in the state….

Some people think [Gillespie’s new] strategy is a mistake. After Gillespie narrowly escaped Stewart in the primary, former John Kasich aide John Weaver told The Washington Post: “Ed is going to have a difficult enough time winning with Trump in the White House. Adding Trump’s bullying, foolish staff—who focus on narrow casting and messaging to the lowest common denominator—would dramatically decrease Ed’s chances in a state, as a Republican, where you have to build a broad coalition to win.”

Amazingly, Kasich and his spear carriers are still trying to convince us that Trumpism can’t win—despite Kasich’s getting shellacked in the primaries and looking like a complete fool in 2016.

Kasich isn’t wrong just because of the politics. He’s wrong because Gillespie is right about MS13, even if he doesn’t really understand the issue himself. MS13 is a dangerous gang of illegal-alien murderers that has exploited our open borders and weak immigration policies, not least Sanctuary Cities, to operate with little fear of police. In rural Virginia, where Stewart voters will provide Gillespie with the votes he must have, the issue has been building for years. 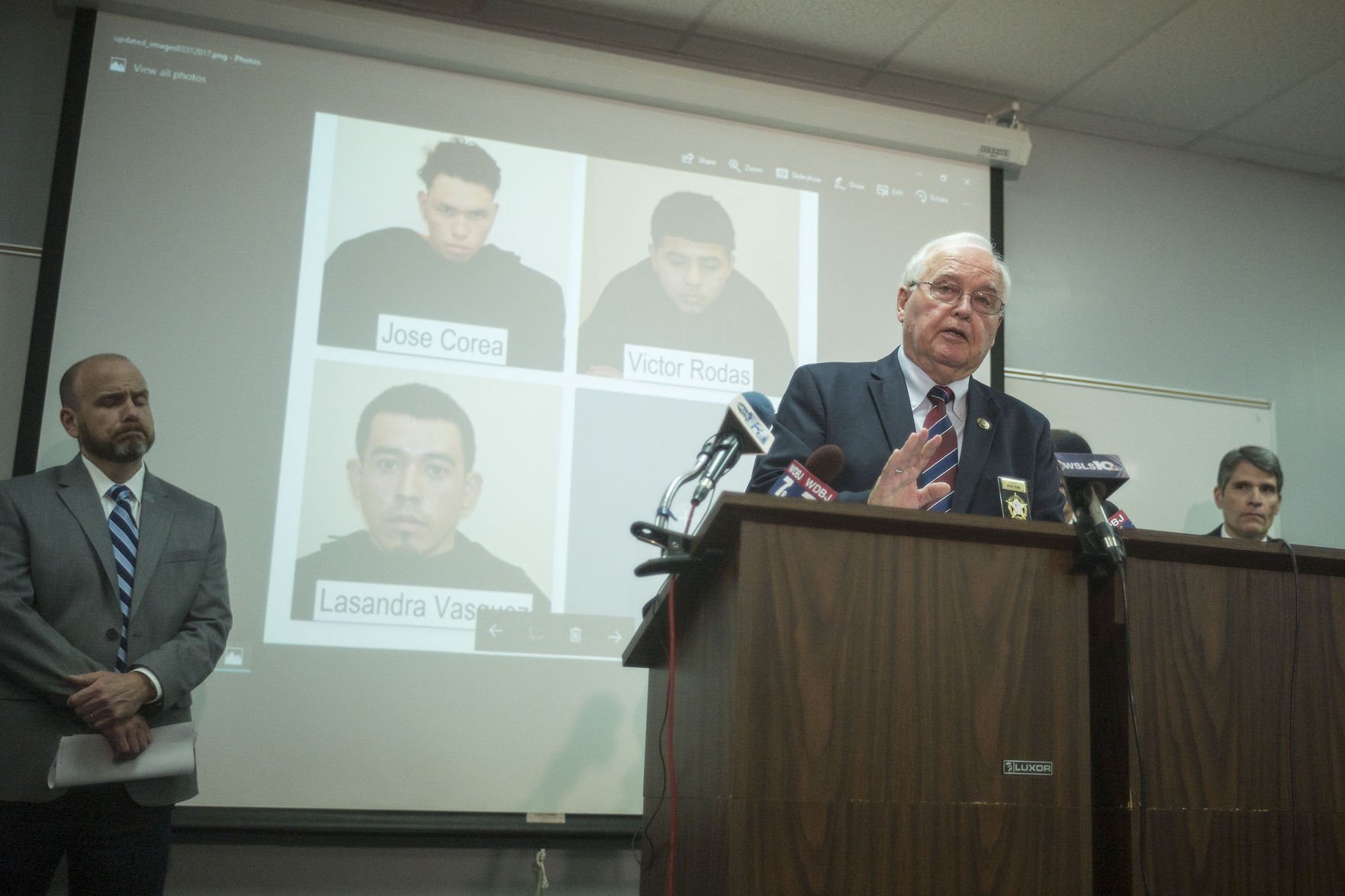 This year, symbolically, MS13’s reach extended to Bedford, home of the storied Bedford Boys mowed down on Omaha Beach on D-Day. In that small town, home to the National D-Day Memorial, three MS13 members, all border-jumping illegals (or DREAMers as Obama would call them) are suspected of murdering a 17-year-old boy.[ Update: Three charged with second-degree murder in Raymond Wood's death, by Rachel Mahoney & Alissa Smith, News & Advance, April 1, 2017] And one of them was involved, police say, in an MS13 hit in Maryland.[ Man wanted in Maryland on murder charges arrested in Bedford County, by Rachel Mahoney, News & Advance, March 29, 2017]

That’s why the Kasich wing of the party is so wrong. Gillespie, his past regardless, is right. [Ed Gillespie says he will not allow sanctuary cities in Virginia if he’s elected governor, By Sally Persons, The Washington Times,  October 11, 2017]

Can Gillespie win? Democrats are obviously worried.  Two of the latest three polls have Gillespie ahead. The RCP average puts Northam ahead by 2.8, well within the typical margin of error. 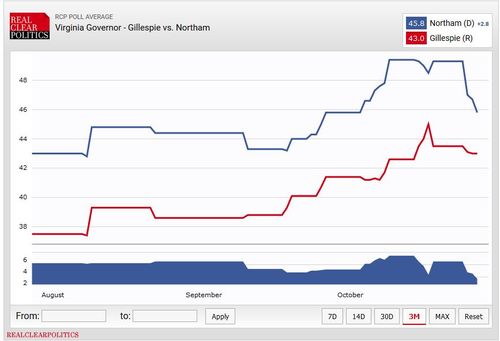 Gillespie is running against the current in Northern Virginia and Tidewater, and in cities such as Richmond, Roanoke and Harrisonburg, which are Leftist to the core, as Virginia’s 2016 presidential result shows.

Then there’s the race between Leftist Terry McAuliffe and conservative Ken Cuccinelli in 2013. Cuccinelli was was persuaded by consultants to abandon immigration patriotism and was mau-maued on abortion,  but he won nearly the entire state—except for Richmond, Norfolk, Northern Virginia, Virginia Beach and other small leftist enclaves such as, again, Harrisonburg. McAuliffe won by just more than 55,000 votes, 48 percent to 45.4.

Of course, Gillespie has history against him. The opposite party of the one that wins the White House usually wins the governor’s race in Virginia.

Yet given what Donald Trump did to Hillary Clinton, perhaps Gillespie can pull off a surprise victory in a state that is trending blue—but in which GOP candidates have a recent record of surprisingly close races.