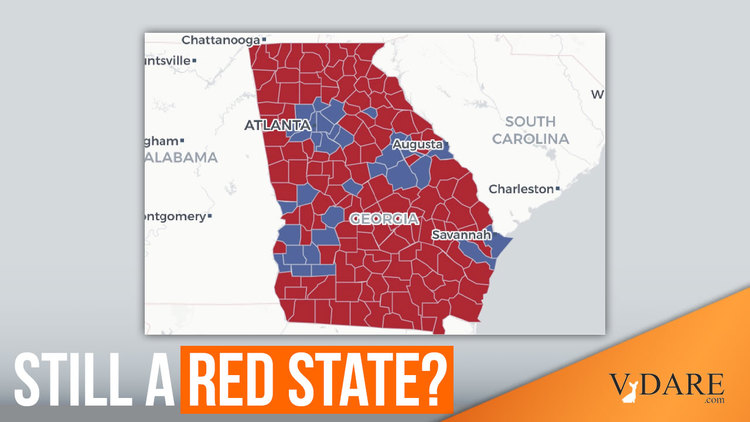 Earlier: Georgia To Bill Kristol: Demography IS Destiny—Let's Do Something About It!

Georgia’s two U.S. Senate run-off elections will be held January 5, and as of late December 30 the Real Clear Politics averages show both Democrat challengers slightly ahead—here and here. (However, VDARE.com’s friendly political consultant Patrick McDermott thinks that such close polls will translate to GOP victories, because of the “shy Republican” tendency he correctly diagnosed before the 2020 Presidential election). But although evidence mounts that something strange did indeed happen in Georgia on election night 2020, a deep-dive on the white vote alone shows that, although immigration policy is certainly moving the Peach State left, there’s still plenty of room for the GOP/GAP to win by mobilizing the white vote—what VDARE.com has long called “The Sailer Strategy.” In 2020, however, Trump just didn’t do it.

Georgia went from being a 72% white state in 1990 to barely above 50% white in 2020. The racial change in the electorate and its consequences are obvious to those brave enough to engage in pattern recognition:

Brian Robinson, a longtime Republican strategist, said he’s seen Democratic gains coming for a decade in Georgia, if for no other reason than the state’s changing demographics.

“The white percentage of the electorate is now 53%. In the Sonny Perdue years, it was 70 plus percent,” he said of the two-term governor, who served in the 2000s. "I mean, that’s that is mind boggling demographic change in a very short period of time.”

This stunning Great Replacement happening in Georgia shows us that demography is indeed destiny. As the non-white vote increases (40 percent of votes cast in 2016, down slightly to 39 percent in 2020), the higher the share of the white vote the GOP will need to get to be competitive in state-wide elections.

But what happened with the white vote from 2016 to 2018 to 2020 made the narrow Biden victory possible (excluding fraud, which does seem to have occurred in heavily black counties such as Fulton and DeKalb).

But you can see clearly:

Abrams ran an explicitly anti-white campaign, even announcing she would sandblast off the Confederate monuments from Stone Mountain ISIS-style if elected. [Abrams calls for removal of Confederate faces off Stone Mountain,  by Greg Bluestein, The Atlanta Journal-Constitution, August 15, 2017]

Here are the results in tabular form:

The city of Atlanta is in both Fulton and DeKalb County, with the other seven counties representing areas where white flight progressed after blacks took control of the city government in 1973.

In 1980, Cobb, Clayton, Gwinnett, Rockdale, Fayette, and Douglas County all were more than 90 percent white, with Gwinnett boasting a population that was 96.6% white and Fayette County at 95% white.

In 2018, every metro Atlanta county has not only seen its white percentage of the population drop, but in many cases the drop has been nothing short of catastrophic.

Fayette County is the only metro Atlanta county still with a sizable white majority, but it has dropped from 95% white in 1980 to 65.2% white today.

With this racial change, came a change in the political climate as well.

The only county Brian Kemp carried in metro Atlanta was Fayette, where he won 56.5% of the votes. Trump won Fayette with 58 percent of the vote in 2016, but barely carried it in 2020 with 52.7 percent.

In 2020, Biden performed better than Clinton had in 2016 in every Metro Atlanta county, save Clayton.

In this heavily black county, Trump increasing from 13.2% in 2016 to 14.1% in 2020 is interesting but not much to show for the disaster of Jared Kushner’s Platinum Plan, which unquestionably alienated some whites.

Case in point: Coweta County, the recipient of white flight from all over Metro Atlanta. [Elected officials missing the point…or maybe just making another point, The Newnan Times-Herald, August 18, 2020]

(The first three seasons of the wildly-popular The Walking Dead series (featuring a zombie apocalypse )largely take place in Coweta County, with downtown Senoia, Georgia the fortified city where the infamous Governor-character lords over in Season Three.)

Moral of the story? Joe Biden won the state of Georgia by less than 12,000 votes. And “won” does need an asterisk by it. But it is obvious by the exit poll data that Trump missed out on a true landslide victory not holding (let alone increasing) his share of the vote from 2016 to 2020.

Speculate on the reasons all you want, but dropping 14 percent with college educated whites and six percent with whites from 2016 to 2020 was why this Georgia race was even close enough to be potentially stolen.

The good news: the GOP/Generic American Party can win Georgia simply by getting back to Trump’s 2016 white share, and more. And Joe Biden’s new Woke Democrats might well help them.

Jack Dalton [Email him] is a recovering conservative.