War Against Christmas 2012: The “Great Tree” Of Atlanta…And The Not-Coincidental War Against White America

[Peter Brimelow writes:  one of the irritating things about the way VDARE.com’s internet fundraising experience has evolved is that our Christmas Appeal apparently has to block the site at the time of year when I REALLY WANT TO FOLLOW the War Against Christmas—one of my favorite subjects, now all too plainly symptomatic of the dispossession of the historic American nation through immigration and associated Cultural Marxism. Please keep giving so we don’t have to block the site again! And please keep sending entries to our annual War Against Christmas Competition—to find the most disgusting attempt to abolish Christmas—to me.]

The Thanksgiving Night lighting of the “Great Tree” outside Rich’s Department Store in downtown Atlanta used to attract scores of thousands of Atlanta residents and people from all across the Southeast. Southern journalism icon Celestine Sibley described it in Dear Store: An Affectionate Portrait of Rich's:

Sibley’s book was published in 1967 to mark Rich’s centennial year. (The store was founded after the Civil War 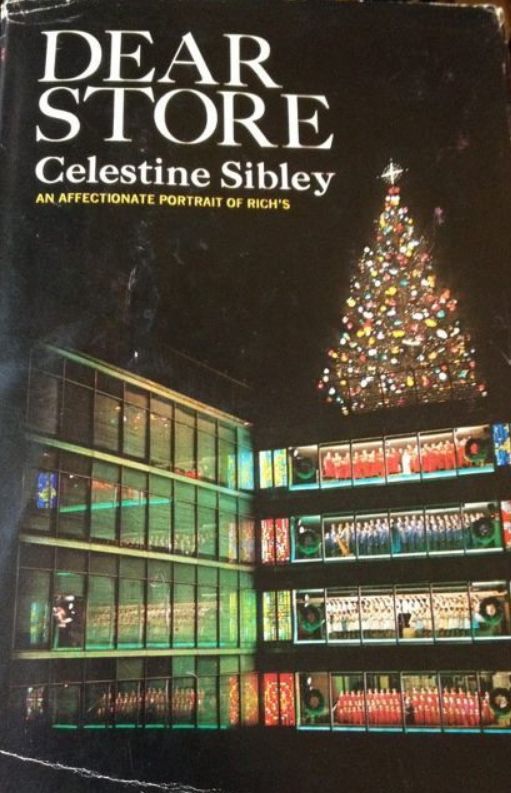 by Morris Rich, a Hungarian Jewish immigrant who grew up in Ohio). Interestingly, Sibley reports that Rich’s “Great Tree” was, from its inception as a “tradition” in 1948, never referred to officially as a “Christmas Tree”.

But Time Magazine put an image of the lighting of Rich’s tree, and the dread word “Christmas,” on the cover of its December 15, 1961 issue (The corresponding story, “Customs: But Once a year”,  was a rundown of the commercialization of Christmas by stores like Rich’s).

And there can be no denying that, originally, the ceremony had a distinct Christian theme.

Jeff Clemmons, in his recently-published  Rich's: A Southern Institution

, recalls the “spectacular” lighting of the 70-foot+  tree sitting atop the famed Crystal Bridge, with all the nearby businesses dimming their lights and the city of Atlanta shutting off streetlights and closing nearby streets:

In the early years, the lighting ceremony would be kicked off with the master of ceremonies, Welcome South Brother (WSB) Radio and TV announcer Bob Van Camp, reading the story of the birth of Jesus as told through scriptures. After his reading, the children’s choirs, located on bottom level of the bridge two stories up, would be illuminated, and they would sing a hymn or popular Christmas song selection. After the children’s choir had finished singing, each successive level of the bridge would be illuminated, and the choir on that level would perform until all four levels were ablaze and all the choirs had performed. Then, a switch would be flipped and The Great Tree would be lighted to the cheers of the crowd below. In later years, the tree would be lighted during the last few high notes of “O Holy Night,” sung either by a lone soloist or with the accompaniment of one or more of the choirs. Under the glow of the tree standing atop the four illuminated levels of the bridge, the choirs along with the gathered onlookers would sing “Silent Night,” ushering in what for many was the true start of the Christmas season in Atlanta.

But just as events like Trick-or-Treating or even Christmas Caroling are dependent on high social capital within the community not merely to prosper, but even to exist, the Rich’s Great Tree ceremony required safe streets.

Celestine Sibley in Dear Store was celebrating an era in Atlanta’s history when white people felt safe going downtown into what is now one of America’s most crime-ridden cities:

Down in the street, the crowd has been assembling for hours. Forsyth Street is roped off to vehicular traffic, and people pour into it from all directions, city people and their country cousins, rich people and poor people, the young, the old, crippled people in wheelchairs, blind people clutching their white-painted canes, clinging to the arms of seeing relatives. There are babies in their mothers’ arms and toddlers riding fathers’ shoulders. They jam the street, making it a vast lane of crowded bodies and uplighted faces.

By 1967, however, when Sibley wrote, Atlanta was already experiencing high levels of white flight from areas of the city with increasing percentages of black residents, and increasing crime.

As Tamar Jacoby noted in her 1998 book  Someone Else’s House: America’s Unfinished Struggle for Integration, the outcome of the 1970s in Atlanta—when black people became the dominant population group and took political control—was not integration, but an “uneasy coexistence”:

Even so, many whites used crime as an excuse to avoid downtown, and blacks and whites divided up the landscape like a battleground. Sometime in the 70s, localized shopping nodes eclipsed the old central hub, and by the end of the [Maynard] Jackson era, Atlanta had two downtowns: the deteriorating black downtown in the center city and the new white downtown, Buckhead, six miles to the north. With the city’s upscale restaurants, its choicest hotels and newest office towers, Buckhead paid taxes to Atlanta and in an important way helped keep it alive, but its residents had less and less to do with the blacks on the south side of town.

Rich’s “Great Tree” appeared on the Crystal Bridge for the final time in 1990. The downtown Rich’s closed in 1991.

…but many people protested the idea of the ceremony leaving downtown. As a result, the store worked out a deal with the owners of Underground Atlanta, a unique shopping district built around an on top of old street viaducts, and invested approximately $400,00 into the new 1991 event. Part of the $400,000 was for the purchase of the tree and new, clear lights for decorations, which would replace the multicolored lights of years past. Other portions of the money were used to build a special platform on top of a parking deck at Underground Atlanta to support and anchor the tree...

The Great Tree remained at Underground Atlanta through 1999. Unfortunately, over the nine years the event was held there, attendance had steadily decreased. By that last year, only about ten thousand people showed up for the tree-lighting ceremony, forty thousand fewer than the number who had attended it eight years earlier when it had initially moved there.

Rich's finally moved the tree to its Buckhead store in 2000. That worked—the first year, an estimated 75,000 to 110,000 people attended the tree-lighting ceremony at its new location, which they obviously felt was safer and more easily accessible than Underground Atlanta.

Today, Rich’s is no more, having merged with Macy’s to stave off bankruptcy in 2003. But the tradition continues: on Thanksgiving Night 2012, the “Macy’s Great Tree”, a 60-foot white Georgia pine, was beautifully illuminated just as The Voice contestant Chris Mann sang the traditional finale “O Holy Night.”

But gone is the singing of “Silent Night”; gone is the reading of the story of the birth of Jesus; gone are the various choral groups signing traditional Christmas hymns. They have been replaced with generic secular “holiday” songs.

Gone, too, is the old Atlanta—where families could gather downtown in safety to see something innocent and beautiful.

And gone is historic America.