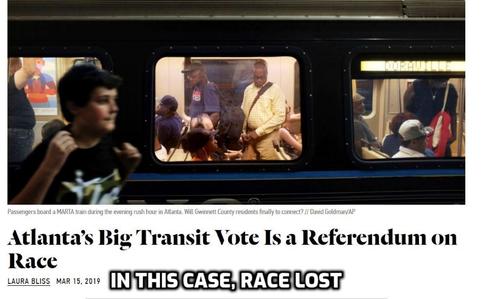 Sailer Strategy Alive And Well In Gwinnett Co, GA—No Thanks To GOP

The Sailer Strategy achieved an unnoticed triumph in Georgia’s Gwinnett County last week, even though the Stupid Party ran away from it as usual. The Sailer Strategy emphasizes the importance of white voters, but in this case, significantly, Gwinnett Asians and Hispanics voted with whites—apparently vindicating another Steve Sailer theory: that black and non-black minorities are not a natural alliance.

White voters turned out in sufficient numbers for a special election to defeat a plan to connect the county with Atlanta’s MARTA, the bus and light rail system hilariously (if Deplorably) known as Moving Africans Rapidly Through Atlanta. Thus did the once-white county defeat MARTA for the third time.  [Gwinnett County Voters Oppose Plan For MARTA Expansion, The Associated Press, March 20, 2019]

Fifty-four percent of voters opposed the measure. Polling data suggested that whites killed it with help from Hispanics and Asians:

About 62% of whites and 57% of Latinos and Asians were opposed, while 62% of African Americans supported it. Opposition increased with age, with 45% of 18- to 39-year-olds against compared to 54% of residents 65 and over against.

Of course, Hispanics and Asians won’t catch any heat for the defeat. They’re People of Color!

Just prior to the election, “older white voters” became the villains because they were turning out in huge numbers in early voting:

“If you look at the demographics of who voted,” said Brian Robinson, a spokesman for Go Gwinnett, "you would assume that there’s a slight ‘no’ advantage right now.

“A lot of these older white voters... in the polling, they’re the least likely to be supportive. We know that,” Robinson said.

MARTA expansion enthusiasts said likewise in 1990 when “70 percent of Gwinnett County voters defeated another proposal to join MARTA,” as CityLab explained it before Tuesday’s vote. The debate back then “featured citizens and elected officials airing yet more hideous views on race,” the website complained:

If you’re looking for prime examples of how white suburbanites employ the “crime train” narrative to advance the idea that public transportation is a conduit of urban dysfunction, you’ll find plenty here. “That place has a reputation for murder and rape—the wrong people,” one man said at a packed hearing in a high school auditorium, referring to the state capital. “We don’t need ‘em, we don’t want ‘em.”

Of course, CityLab’s Bliss did not ask whether those “hideous views on race” had any merit, or whether Atlanta deserved “a reputation for murder and rape.” The scare quotes were enough. Black crime is an irrational racist fantasy.

More than three years before the vote in 1990, MARTA backers began depicting whites as villains for trying to protect their lives and property. The white MARTA Chairman, J. David Chestnut, said the expansion was “being held hostage to race,” and that “whites in the prosperous suburbs of Cobb and Gwinnett Counties fear that Marta's sleek trains and buses will bring blacks and crime”. [Racial Roadblock Seen In Atlanta Transit System, by William Schmidt, The New York Times, July 22, 1987]

But back to the future, with whites now in the minority in Gwinnet. Did the Georgia Republican Establishment serve as their advocate in the MARTA debate?

“Sheriff Butch Conway and District Attorney Danny Porter, both of whom have been in office since the 1990s,” the Atlanta Journal-Constitution reported, “join former Gov. Nathan Deal as high-profile Republicans who have now urged Gwinnett residents to vote yes during the March 19 special election”. [Gwinnett’s Sheriff and DA Both Republicans, Endorse MARTA Referendum, by Tyler Estep, March 5, 2019]

Not to be outdone, and probably revealing the source of GOP Establishment enthusiasm, Dan Kaufman, president of the Gwinnett Chamber of Commerce argued that “MARTA is the key to our future.” The chamber, he said, is “four-square behind” it. [Gwinnett Chamber leaders endorse passage of county’s MARTA referendum, by Curt Yeomans, Gwinnett Daily Post, January 22, 2019]

But Gwinnett County whites, along with some Hispanics and Asians, obviously ignored their supposed leaders:

The initiative failed, with 54 percent of voters opposed and 46 percent in favor. Opposition was  strongest in the farther-out reaches of the county and among older white voters.

Supporters tried to overcome the resistance in more conservative neighborhoods by focusing on get-out-the-vote efforts in areas seen as friendlier to the MARTA expansion. In the end, though, turnout was strongest in the outlying areas.

But is this victory is the “last gasp” of the county’s whites given The Great Replacement—the demographic disaster for whites in Georgia and elsewhere.?

The Great Replacement is a “racist theory,” we are told.

But tell that to Peach State Leftists who openly and gloatingly discuss it, not least Stacey Abrams, the nearly-victorious black Leftist who ran for governor in 2018.  Abrams nearly flipped Georgia blue, losing by less than 55,000 votes to Republican Brian Kemp. Kemp pulled just 50.2 percent of the vote. VDARE.com has been almost alone in showing that Georgia is on the verge of going the route of California—out of reach for any Republican.

Now, chew on this:

In January 2001, Georgia’s electorate was 72 percent white and 26 percent black, while Hispanics made up less than two-tenths of 1 percent, according to data compiled by the secretary of state. As of Aug. 1, those numbers had changed dramatically.

Blacks now make up 30 percent of active registered voters while whites are at 60 percent. Hispanics make up nearly 2 percent of the electorate after seeing their registration numbers increase from just 933 in 2011 to 85,000 as of Aug. 1.

In early 2019, Abrams even pledged to support non-citizen voting in local elections:

Georgia [is] changing fairly dramatically and very quickly. And I could see that there was a pathway for Democrats to surge and to start to reclaim more power in the state. I believe that we are a purple state. I like to say we’re blue and just a little confused. But the notion being that, as we continue to change demographically, our politics are gonna keep changing

Consider how quickly the white demographics in Georgia has collapsed. In 1990—when Gwinnett’s white voters defeated the “crime train” the second time—the state was 70.1 percent white. Now, it’s just 53.9 percent white. By 2033, the state is projected to be majority-minority.

That’s just fine, by the way, with Abrams booster Michelle Goldberg of The New York Times, who wanted Abrams to show “white nationalists what they fear most. Show them they’re being replaced”. [We Can Replace Them, October 29, 2018]

In 2016, Gwinnett went for Hillary Clinton over Donald Trump, 50.2 percent to 44.4, the first time the county went Democrat since George’s native son Jimmy Carter won 60 percent of the vote in 1976. Four years later, Ronald Reagan carried the county with 52 percent.

But then came The Great Replacement.

In November 2016, Abrams’ narrow loss aside, Democrats crushed Republicans in Gwinnett’s local and state contests. Democrats not only took seats from the incumbent GOP solicitor and two county commissioners, but also flipped two seats in the state Senate and five seat in the House. Democrats have 17-8 majority in the county’s delegation in the state Capitol.  [Democrats big election showing highlights Gwinnett’s shifting politics, by Curt Yeomans, Gwinnett Daily Post, November 10, 2018]

Gwinnett’s vote on MARTA shows that, through superior mobilization and motivation,  whites can still determine elections even after they are in a minority—something also seen in Jair Bolsonaro’s 2018 election in Brazil.

But nevertheless the rising tide of color in Gwinnett County—The Great Replacement across Georgia—is remorselessly killing the Republican Party, which is too busy bragging about its colorblindness to see.

Problem is, the GOP won’t be the only casualty. So will Georgia’s whites a.k.a. Americans.