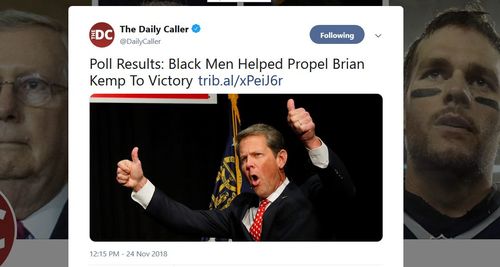 Black Men Save GOP Governor's Race In Georgia... With Eight Percent Of Votes?

It's tweets like this which show that the conservative movement really, really doesn't get it.

As Paul Kersey wrote at American Renaissance, the victory of Brian Kemp in Georgia really is just delaying the inevitable as Georgia continues its. demographic transformation [Kemp victory only delays the reckoning, November 21, 2018] Yet the Daily Caller has another interpretation.

As is typical for states in the deep south, white men voted overwhelmingly for the Republican candidate — where they made the vast bulk of Kemp’s base on Election Day. Kemp also performed extremely well with white women, capturing about 75 percent of their vote. On the other side, black women — perhaps hoping to elect the first black female governor in U.S. history — voted for Abrams by a 97-percent margin.

However, it’s one segment of the Georgia population that has raised eyebrows: black men.

Eight percent of black men pulled the lever for Kemp on Election Day, according to the Associated Press’ VoteCast. CNN’s network exit polling projected that number to be as much as 11 percent. The numbers reflect the double-digit support Donald Trump enjoyed from this demographic in Georgia following the 2016 presidential election. Exit polling following the 2016 election indicated that 15 percent of black men voted for Trump, bucking the norms of the previous two presidential election cycles.

This is pretty misleading framing. Black men didn't "propel" Kemp to victory. If he got double digit votes, it's more like Kemp managed to control the bleeding. Besides, even as revealed by this article, Kemp didn't even match Donald Trump's performance among black males in the state. It would ultimately be better for Kemp to have increased his share of white women by a few points.

Ultimately, as even Bill Kristol admitted, demography is destiny, and we don't have elections so much anymore as a census. The Left knows this and is openly pursuing a replacement strategy. Yet the conservative movement can't even speak honestly about what is going on. Until that changes, it's easy to see which side is going to win this contest for the future of America.