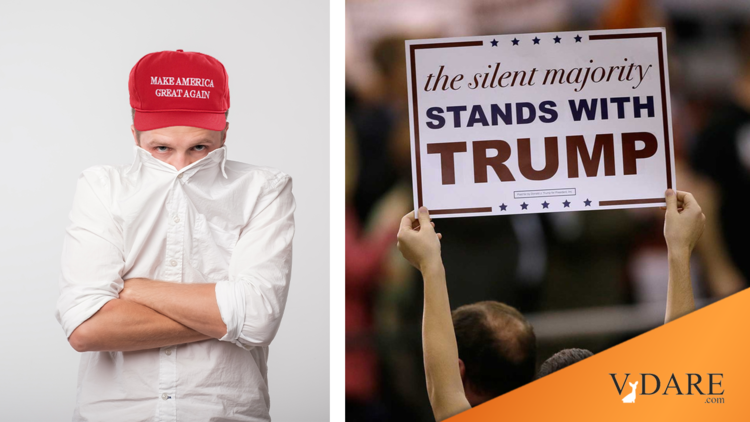 Yes Virginia (Dare), There WERE Shy Trump Voters. And Polls On BLM Etc. Are Even Worse

Patrick McDermott
A+
|
a-

The “Shy Trump Voter” theory—that Trump voters consistently understated their support for the president in public opinion polls—was hotly disputed by polling experts like Nate Silver at Fivethirtyeight.com. [There Just Isn’t Good Evidence That ‘Shy’ Trump Voters Exist, by Galen Druke and Nate Silver, FiveThirtyEight, October 30, 2020;  Trump Supporters Aren’t ‘Shy,’ But Polls Could Still Be Missing Some Of Them,  by Geoffrey Skelley, FiveThirtyEight,  September 30, 2020]. But they were wrong. And other polls, notably those that purport to show widespread support for immigration and Black Lives Matter, are probably even more inaccurate.

The twin causes of this phenomenon, known in the industry as Social Desirability Bias, are well-documented:

Earlier this year, the Cato Institute sponsored a survey of American attitudes that documented the extent of the fear that has swept over the American public. According to the study, 62 percent of Americans say they have political views that they are afraid to share because others might find them offensive. Nearly a third (32 percent) worry that their views could affect their employment and career opportunities, including potentially costing them their jobs.

These fears are concentrated primarily on the Right and in the political center. College-educated Republicans are particularly fearful that their views, if known, would harm them at work. 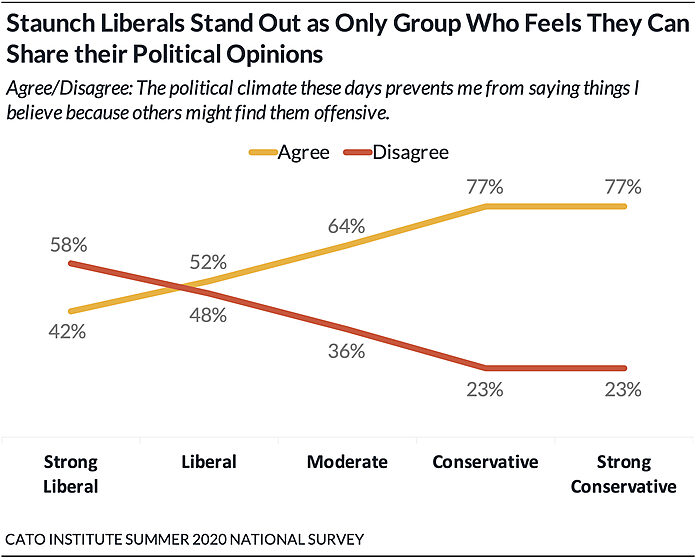 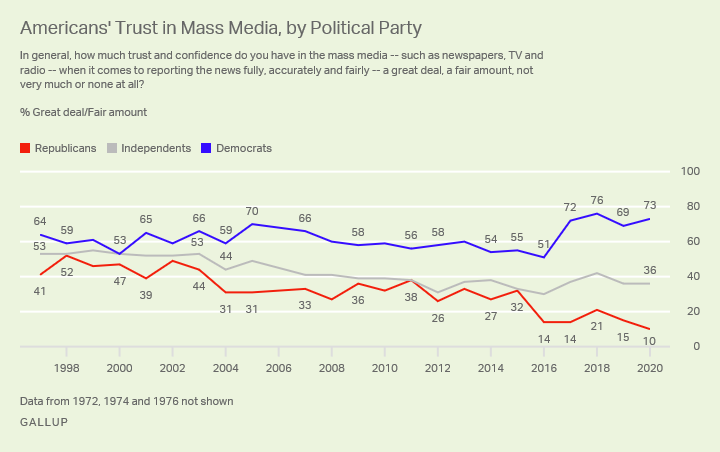 According to the pollster Frank Luntz (and confirmed by my own polling), this has produced profound levels of distrust in polling in general. Growing numbers of conservatives now say they will not take such polls. Many openly admit that they will lie if they do.

What impact is all of this having on poll results? We do not yet have a reliable estimate, but it looks like Social Desirability Bias reduced support for Trump in this year’s polls by an average of about 5 percent. This estimate comes from comparing the final election polling averages (which favored Biden by 8.4 percent according to Nate Silver) to the final election results, where Trump is trailing in the popular vote by about 3 percent (this number may rise in the days ahead). This produces a net difference of about five percent.

Further evidence can be found by digging into the two specific ways that Social Desirability Bias is affecting the polls.

The first of these, outright lying, has been well documented by both the Pew Research Center and Morning Consult, a polling firm. Both organizations estimate that lying to pollsters (usually by falsely claiming to be undecided) has produced a net change of about 2 percent.

The second contributor—poll avoidance—has been shown to reduce reported support for Trump by another 3-4 percent [Beware the phantom swings: why dramatic bounces in the polls aren't always what they seem, by Douglas Rivers, YouGov.com, November 1, 2016].

Some organizations, like Pew [The RBS poll comports well with data from the full voter file about the partisanship of registered voters,October 9, 2018] and analysts at the New York Times [Are the Polls Missing Republican Voters? by Nate Cohn, July 29, 2020] discount these effects by claiming that there are no overall differences between Democrats and Republicans when it comes to their willingness to speak to pollsters.

But these analyses miss an important point: the truly meaningful differences are not found between the parties. Instead, they are found among independents.

Trump-leaning independents, especially pure independents who do not favor one party over the other, are the group that it is most responsible for Social Desirability-related polling error.  While Republicans (and even some Democrats) are shy too, they are both so reliably partisan that replacing a shy partisan who is unwilling to talk to pollsters with another non-shy partisan who is does not change the poll results very much. In each case, over 90 percent of Republicans and Democrats—both shy and non-shy—reliably support their own party.

Independents, on the other hand, are very different. Shy Independents who refuse to answer polls are far more likely to lean Right, while non-shy independents—i.e., those more willing to answer polls—reliably lean to the Left. The differences in their respective willingness to speak to pollsters produces polling results that consistently show independents leaning far more to the Left than they really do.

Of course, now that the Presidential election is over, it might be tempting to think that none of this matters anymore. That is unlikely for two reasons.

If so, we can expect “shy” voters to continue to play an outsized role in future elections, regardless of whether Trump himself is on the ballot.

As I documented in a previous article, academic research has shown that opinion polls on racially sensitive topics (like immigration) typically underestimate white support for the more conservative position by about 20-25 percent—an amount that dwarfs the five percent error rate found in this year’s presidential polls.

The reason? The widespread dissembling found on these issues is not limited to a handful of centrist independents. It is instead found all across the political spectrum—including whites on the political Left. For example, they are not as uncritical of immigration as they profess.

Oh, what a tangled web we weave when first we practice to deceive!

The 2020 election may be over, but its effects may linger with us for the foreseeable future. If our national politics continue to pit an increasingly Woke Left against a more racially aware Right, our politics over the coming decade may prove to be just as complicated as they are divisive.

Patrick McDermott [Email him] is a political analyst in Washington, DC.