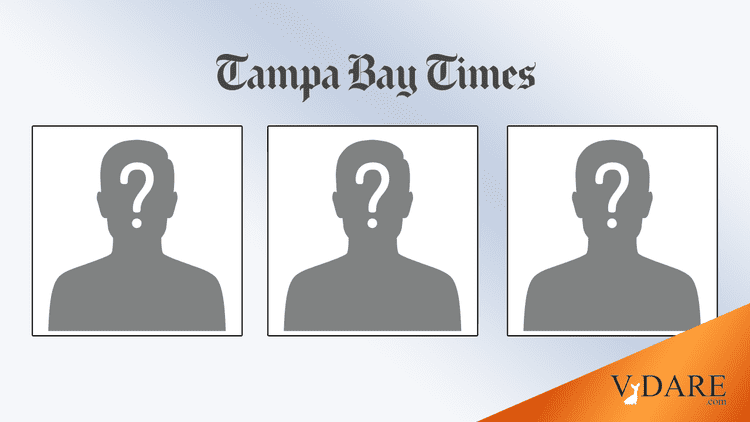 Because too many black and brown people get arrested, the Tampa Bay Times has suspended publishing a mugshot gallery of those arrested in Tampa Bay to stop “further(ing) negative stereotypes.”

Enabling citizens of Tampa Bay to engage in pattern recognition when it comes to who is committing the crime in the area (black and brown people) “serve[s] little journalistic purpose.”

The Tampa Bay Times effective today will no longer publish the mugshot galleries of those arrested around parts of Tampa Bay.

The galleries, which had been accessible on the tampabay.com homepage, included photos of every person arrested in Hillsborough, Pinellas, Pasco and Manatee counties.

Several news organizations have discontinued such galleries amid criticism that they disproportionately show black and brown faces. The arrest information is publicly available on law enforcement websites.

“The galleries lack context and further negative stereotypes,” said Mark Katches, executive editor of the Times . “We think the data is an important resource that our newsroom will continue to analyze and watch carefully, but the galleries alone serve little journalistic purpose.”

There’s no need to reinvent the wheel.

Truth, it seems, has a well known racial bias.

To quote one of the prophets of the 21st century, “punishment must be unusual or it serves no purpose.”

Those who break the law should have their photos published in local papers, for shame serves as a great deterrent to repeat offending. The community should be made aware of those who break the law, and if racial patterns emerge, then society can pass laws based on this information to protect the law-abiding.

For remember: in a multiracial society, social policy shouldn’t be based on individuals.

And once stereotypes are confirmed to have firm basis in racial truth, social policy will immediately be crafted from these observations.