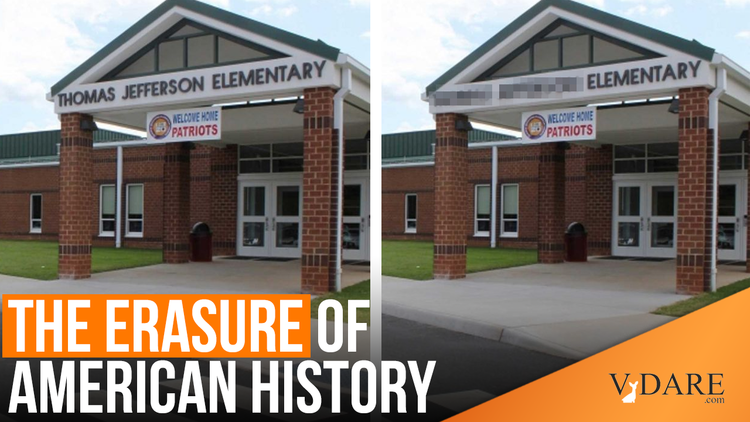 It was never going to stop with just Confederate statues/monuments/street names/schools.

It’s a project in removing the celebration/memory of all Dead White Males across America.

The Great Replacement has consequences.

The Falls Church School Board in Virginia voted 7-0 to change the names of Thomas Jefferson Elementary and George Mason High Tuesday night.

The vote comes despite an October community survey that found 56% opposition to changing the school names.

“After deep and careful consideration of everything I’ve heard and read, I conclude that renaming both schools is in the best interest of our students and a necessary part of our equity work,” Greg Anderson, chair of the Falls Church School Board, said Tuesday.

The name change is a school board initiative that began in the summer at the height of social unrest and included a survey of the Falls Church community taken in October.

The survey revealed that 56% of the community overall asked that the names stay on the schools, including 61% of the parents of Thomas Jefferson Elementary students and 57% of George Mason High parents.

One of the speakers at the meeting, Dr. Jennifer Santiago, said she represented the minority voice in the survey and agreed with the board’s decision.

“While there are many times majority rules works in issues of equity, it is the opposite that is needed,” Santiago said. “If the majority rule worked for traditionally marginalized groups, we would not have systemic racism.”

A major reason survey participants said they were against changing the school names is because George Mason and Thomas Jefferson were “Founding Fathers” with significant contributions to Virginia and the nation.

Former Thomas Jefferson and George Mason student William Henneberg said changing the names against what the majority desires will set a bad precedent for the future.

“Do not encourage our students to be victims or to use offense as a means to shut others down,” Henneberg said. “Encourage our children to be critical thinkers.”

Santiago disagreed, saying the majority’s decision-making has ruled for a long time, and its actions are being tackled with the current name-change discussions.

“We need to listen very strongly to the minority response to this survey,” Santiago said. “Because the voices making up that number are the ones most negatively affected by the lives and legacies of these two men.”

School board members said that they thought long and hard about the issue, with some members saying their thinking evolved over the months in favor of changing the school names.

Some members said they had reached an understanding of the hurt the Jefferson and Mason names can cause African American students.

“The voice of some African Americans in our community who spoke up pushed me off the fence on to the side of seeing that it is essential we change the names. What I heard from them is that this matters,” said school board member Shannon Litton.

Jefferson and Mason today, every school named after a Dead White Male (regardless of what they did in life to advance the woke causes) tomorrow. Statue, street, building, and city, too.