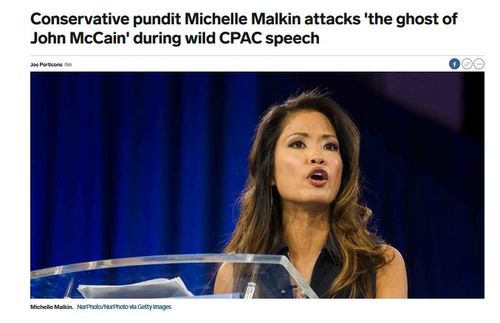 Conservative pundit Michelle Malkin railed against Republicans who she believes are not serious about combatting illegal immigration and condemned "the ghost of John McCain" during her speech at the annual Conservative Political Action Conference (CPAC) on Friday.

"Railed", of course, is a hate word. When you describe someone as railing, you're saying they shouldn't have said it. (Google says that the words "Trump railed" have been used eight times as much as the words "Obama railed", although Obama had two terms to rail in, and I specifically remember him railing on the subject of racism.)

Michelle's  speech attacks both parties, but calls out some specific Republicans. This transcript is from her own site, but links are added by me:

Nearly half of all illegal aliens in the country have violated the terms of their short-term visitor or work visas. More than 10.8 million people received such visas alone in fiscal year 2015, including 500,000 foreign university and graduate students on academic visas and nearly 700,000 total foreign guest workers (both skilled and unskilled, not to mention their spouses, many of whom are allowed to work here as well).

Congress has repeatedly mandated a nationwide visa entry-exit system to track legal short-term visa holders. But one has yet to be built—even in the wake of the 9/11 terrorist attacks, which were perpetrated in part by several illegal alien visa overstayers. E-verify has been stalled. Sanctuary cities metastasized. And BOTH parties are to blame – yeah I’m looking at you, Paul Ryan, Mitch McConnell, the Bush family, Mitt Romney and the ghost of John McCain.

By the way, if you think it's wrong to speak out against the ghost of John McCain, remember that McCain used his funeral, to which he specifically disinvited the President of the United States, as one more attack on Trump and America.

Letter from Trump’s Washington
John McCain’s Funeral Was the Biggest Resistance Meeting Yet
Two ex-Presidents and one eloquent daughter teamed up to rebuke the pointedly uninvited Donald Trump.