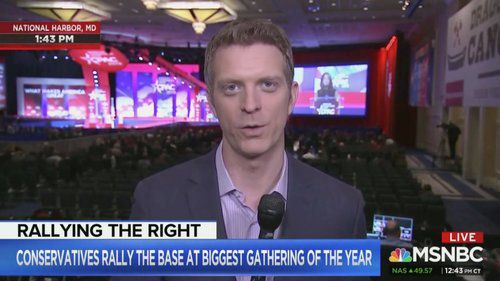 MSNBC On Michelle Malkin At CPAC: "Bush Family, The Entire Legacy, Has Been Erased From Conservative History"—Which Is Great News!

This is from MediaIte, via Jim Treacher, who remarks "If there's one thing MSNBC has always treasured, it's Bush's legacy."

You can see Michelle Malkin on the screen behind Haake in the photo above, or the video, if you go to MediaIte.

Reporting live from the conference, Haake said CPAC hasn’t really changed in terms of the issued being discussed, but the context has:

“This has become a pro-Trump conference more than it is a conservative conference. He is the uniting factor for all of the folks who are attending here. History changes around this conference. If you were to listen to the speakers over the course of two days, you would hear about three presidents. Ronald Reagan, who’s held up as an exemplar here, then Barack Obama who is the worst president of all time, and then Donald Trump. The Bush family, the entire legacy, has been erased from conservative history at this conference.”

Michelle Malkin took a swipe at the Bush family in her speech today that also knocked “the ghost of John McCain.”

Haake also said the “modern-day bad guy” at CPAC this year feels like Congresswoman Alexandria Ocasio-Cortez, given how much speakers have invoked her.