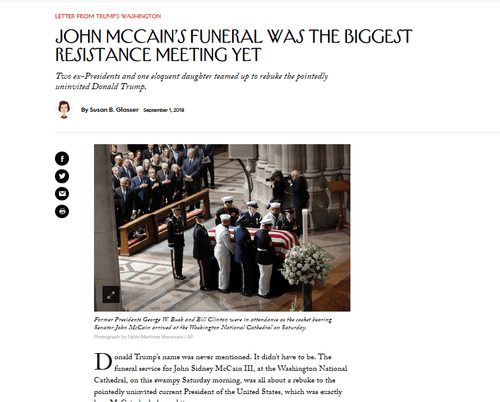 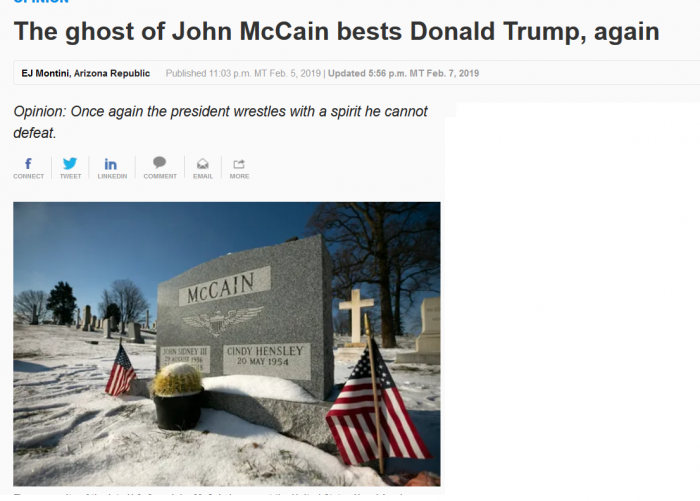 Below, I noted that Michelle Malkin's great CPAC speech called out "Paul Ryan, Mitch McConnell, the Bush family, Mitt Romney and the ghost of John McCain." It's that last one that everyone's talking about.

Almost a month ago, EJ Montini wrote a story in the Arizona Republic called The ghost of John McCain bests Donald Trump, again. [February  5, 2019] What was the ghost of McCain doing? Starting a war with Iran, backing an invasion of America by Mexico, or calling out his own party for racism? No, all he was doing was stabbing his party, and his President, in the back over Obamacare?

"Donald Trump lost, again, to John McCain, who passed away six months ago.

Even without McCain there to defend himself Trump lost.

Or was it the ghost of McCain whispering in the president’s ear, getting him to speak negatively and in such a way that was meant to insult or denigrate the late senator but only proved what a petty, insecure man Trump can be?

This time, Trump choose to attempt to disparage McCain at a luncheon he hosted for TV news anchors on the day he’d deliver the State of the Union

According to reports, Trump again complained about the senator’s thumbs-down vote that rescued the Affordable Care Act in 2017, saving health care for untold Americans but costing Trump a win. Which is all he cares about."

I don't know or care what Montini's poltics are, but Americans who voted for a Republican president and a Republican Senate presumably wanted Obamacare gone, although the GOP's plans for replacing it were extremely lame. It's almost as if they wanted to lose, and raise funds off of losing.

If so, they succeeded in the midterms—see Obamacare Repeal: Did McCain's Last Backstab Help Cost Republicans The House?

But McCain's ghost is haunting the Republican Party because he meant it to.His funeral, to which he specifically disinvited the President of the United States, was one more attack on Trump and America, and on the Party he so often betrayed.

Letter from Trump’s Washington
John McCain’s Funeral Was the Biggest Resistance Meeting Yet
Two ex-Presidents and one eloquent daughter teamed up to rebuke the pointedly uninvited Donald Trump.

Here are some the things we wrote about John McCain immediately after he died:

In that last item, I included a Tweet from a young woman who worked in Ted Kennedy's "immigration office":

As an intern, I learned a lot about the power of humanity in government through his deep friendship with Sen. Kennedy.

He meant so much, to so many. My prayers are with his family. https://t.co/iu28V3snDm