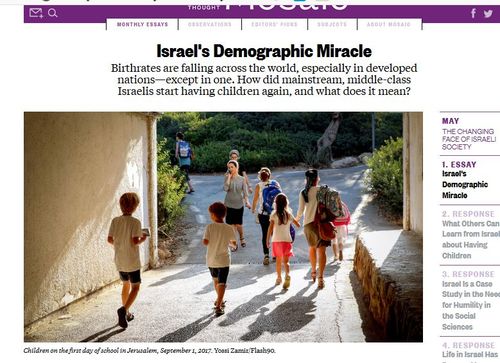 Birthrates are falling across the world, especially in developed nations—except in one. How did mainstream, middle-class Israelis start having children again, and what does it mean?

… In 2015, Israel’s general fertility rate was at 3.1, with both Jewish and Arab sectors of the population at about 3.13. This represented a sea change from the year 2000, when Israeli Arab fertility, as we have just seen, stood at 4.5, while the Jewish rate was at 2.6. During the last decades, fertility among Arabs in Israel has roughly followed the general downward trend across the Middle East, with Muslim Arabs now at about 3.35 and trending downward while among Christian Arabs the rate has for a long time fallen far below replacement level. Meanwhile, the Jewish rate continues to rise, with an estimate for 2017 of 3.16—roughly on a par with or above that of Arabs within Israel as well as across most of the Middle East. …

Among non-ḥaredi, religiously observant Jewish women, fertility in the same period remained almost unchanged: about 4.0 in the year 2000 and about 4.2 in 2015, for a rise of perhaps 5 percent.

Among women identifying themselves as “traditionally” observant, the fertility rate rose from about 2.6 in 2000 to 3.0 in 2015—an increase of about 15 percent.

Among “traditional” but not very observant Jewish women, the upward jump was even more striking, higher by almost 20 percent: from about 2.1 in the year 2000 to about 2.6 in 2015.

Finally, among women identifying themselves as non-observant or secular, fertility rose by almost 15 percent from about 1.8 in the year 2000 to about 2.1 in 2015.

We can sum up the story so far:

In 2000, for each Arab child born in Israel there were two Jewish children: a ratio of 2/1.

In 2010, for each Arab child born in Israel there were three Jewish children: a ratio of 3/1.

In 2020, two years from now, if current trends hold, for every Arab child born in Israel there will be four Jewish children: a ratio of 4/1.