Speculation that columnist Ann Coulter might not be disinclined to Donald Trump’s candidacy began when she characterized her attitude toward him as “blind worship...like the North Korean people with their dear, dear leader.” Her description of him as “my hero, our savior” and “the greatest candidate for president ever” did little to dispel the rumors. But her declaration that Trump’s policy paper on immigration was “the greatest political document since the Magna Carta” and that she “totally would” marry him if he were single may have been the broadest hints yet that an outright endorsement might be in the offing.

Today she places him in the company of the Almighty with the release of her book In Trump We Trust: E Pluribus Awesome!

The clarity with which Miss Coulter makes her preferences known is rivaled only by that of Trump’s own message. As she reminds us, he announced his candidacy “in a speech talking about 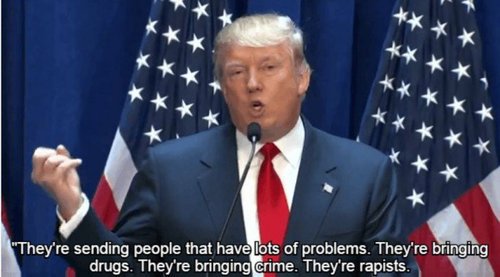 Mexican rapists, pledging to deport illegal aliens and build a wall.” All hell broke loose and within a week, he had lost tens of millions of dollars: Univision dumped Trump’s Miss USA pageant; NBC dumped both the Miss USA and Miss Universe pageants; Macy’s dumped his ties; and ESPN dumped his Trump National Golf Club.

Any other Republican would have issued a clarification that “what he meant was that Mexico was sending us its David Livingstones and Niels Bohrs to do the jobs Americans won’t do.” Trump instead barred Univision employees from his properties and dismissed the neckties as made in China anyway. He shot to the top of the polls, and it turned out that the Establishment had no back up plan for dealing with resistance. They had never needed one before.

It was just the same as when ABC Hispanic correspondent Tom Llamas [Tweet him] told Trump the term “anchor babies” was offensive and Trump responded that it was a perfectly good expression which he intended to go right on using. Every other Republican was cowering before the beast of Political Correctness—until Donald Trump calmly revealed it as nothing but a paper tiger.

It’s extremely rare for people to take positions that will hurt them with their friends. Trump lived among fancy Manhattanites. What he was saying on immigration was going to cost him friends. The standard response to someone who wants to restrict immigration is: You don’t understand—your positions are very gauche, very déclassé. These are the opinions of ethnics in the outer boroughs. Other people would say, “Oh, my gosh—did anyone see?” Trump said, Yeah, I think I still want to build a wall. The sophisticates didn’t have a comeback.

Journalists hastened to attribute Trump’s success to a vague “anger” among voters, without going into why they might be angry or what they might be angry about. But as Coulter points out, “if it was just tough talk the voters were hungering for, why didn’t Governor Chris Christie go anywhere?”

Others claimed voters were merely responding to Trump’s colorful personality. But Coulter notes that “the one thing voters weren’t wild about was his personality.” Admittedly, he can be coarse and vulgar. But “the problem with trying to find an old-school WASPy, understated, dry, less-is-more, antique leather, sturdy wood and brass type to take Trump’s positions” is that such a person couldn’t endure the sort of abuse such positions would evoke, much less fight back.

If Arianna Huffington’s Huffington Post had put coverage of Romney’s 2012 presidential campaign in its entertainment section, can anyone imagine him tweeting: “I fully understand why her former husband left her for a man—he made a good decision”?

And just how much gravitas do we have a right to expect of a presidential candidate in contemporary America? As Coulter points out, “Our current president was a community organizer, the last guy was a president’s son, and the one before that was a rapist.”

Hard as it may be for journalists to understand why American voters would care more about protecting their livelihoods than about stirring up a war with Putin, we are forced to consider the possibility that Trump is popular because of the positions he has taken. And although there are a number of these, “they all come down to taking America’s side—on trade, on war, on outsourcing, on NAFTA, on NATO, on our borders, on terrorism.” Strange to say, this has proven very popular with Americans.

As Coulter points out, the Republican Party has been dominated for many years by bankers and corporatists who only really agree with Republican voters on one issue—keeping their taxes low. By facilitating globalization, the GOP has benefited them at the expense of everyone else, guaranteeing them “a much bigger share of a much smaller pie.”

We have imported millions of peasants and destroyed the middle class in order to make the very rich much richer. It was an alliance between the super-rich in search of cheap labor and old-fashioned socialists in search of a proletariat more amenable to their plans. Coulter writes:

It’s not in the Anglo-Saxon character either to take orders or to give them. That’s why the socialist left finally gave up on traditional Americans and pinned their hopes on immigrants, who bring their socialism with them. If you want a conservative country, you need a conservative populace. Immigration is changing the country, and there will be no changing it back. If you don’t understand that, you are the enemy of any conservative undertaking.

Before Trump’s announcement, the Republican Party had always successfully prevented the voters from being given a choice on the issues which affected their own lives by distracting them with secondary issues or events happening on the other side of the world. As Coulter puts it, “If your elected representative is talking to you about ISIS, he’s planning to outsource your job and move Syrian refugees into your neighborhood.”

Donald Trump foiled this diversionary strategy with a single speech.

Main Stream Media coverage of Donald Trump is itself one of the biggest stories of this campaign. In one of her most effective chapters, Coulter cites forty-two nearly identical MSM complaints that Trump has not offered enough “policy specifics”—over a period in which he released no fewer than six policy papers on subjects such as immigration, taxation, trade, veterans’ affairs and health care, all loaded with concrete proposals.

How paranoid do you have to be to see a conspiracy in a pattern of dishonesty this extensive and consistent?

Personal agency is another concept with which journalists covering Trump’s campaign have had difficulty. When Leftist thugs attacked Americans peacefully attending Trump’s rallies, journalists told us that “fists flew,” as though it were normal for fists to fly about unattached to anyone in particular. Such violence only occurred at Trump’s rallies, they solemnly intoned—as though the failure of conservatives to beat up Hillary’s supporters were proof of Trump’s lawlessness.

Millions of Americans still believe that Donald Trump made fun of a handicapped reporter. This is a 100% MSM fabrication intended to distract from the correctness of Trump’s earlier observation that many Muslims in America celebrated the 9/11 attacks (although his claim that “thousands” did so may have been hyperbole). Coulter tracked down “more than two dozen people reporting separate instances of between a dozen and forty Muslims celebrating the 9/11 attacks in the New York vicinity at a minimum of six different locations.” Yet the entire media establishment rose up as one to deny that any such thing had happened.

One reporter, the Washington Post’s Serge Kovaleski, even disavowed his own story written one week after the attacks [Northern New Jersey Draws Probers' Eyes By Serge F. Kovaleski and Fredrick Kunkle ,September 18, 2001]. Trump responded with a funny impression of a flustered man trying to deny his own words, and the MSM claimed he was mocking a physical handicap Trump had no way of knowing the journalist had.

Americans who lived near our southern border were being murdered, shot, raped, their livestock slaughtered, their homes broken into, and their property destroyed. John McCain called them “crazies” for objecting. “We have a very extreme element within our Republican Party,” he told The New Yorker, criticizing Trump for having “galvanized” them.[John McCain Has a Few Things to Say About Donald Trump By Ryan Lizza , July 16, 2015 ]

When Trump sided with his own long-suffering Arizona supporters against McCain, Frank Luntz  “interrupt[ed] him with the monumentally irrelevant ‘But he’s a war hero!’” Trump pointed out that getting captured does not make one a hero. This entirely correct and reasonable remark was construed as “an attack on McCain’s war record,” and a week of frenetic denunciations followed.

But at the end of it, polls showed that Trump’s favorability among Republicans had nearly doubled, while he was more popular with vets and those currently serving than McCain himself!

Studies have demonstrated that media attacks can backfire, resulting in increased support for causes such as gun rights.     The outcome of the present election may depend on whether or not the public grasps the full extent of journalistic dishonesty in contemporary America.

They will if they read In Trump We Trust—order it here.