One of the justifications for the whole DREAMer Amnesty is these poor kids were brought here so young they don’t even know their home country blah blah. In other words, these DREAMers are more American than Mexican (or whatever), so let’s legalize ‘em ASAP.

Oh yeah? So why were a group of DREAMERS taken to Mexico to get them back in touch with their roots? After getting in touch with said roots, they were whisked back here to the U.S. of A.

La Opinión, the biggest Spanish-language periodical in the United States, featured the story, including a photo (above) of the group visiting the pyramids of Teotihuacan near Mexico City:

After reconnecting with their roots and visiting various places in Mexico during three weeks, 33 undocumented students, beneficiaries of DACA, arrived to the airport of Santa Ana in Orange County with a better understanding of themselves….The young people, who traveled with a special permission known as Advance Parole were part of a summer course of California State University Long Beach (CSULB), under the tutelage of Dr. Alfredo Carlos. The class was based on the reintegration of cultural inheritance, and was imparted entirely in Spanish. The objective was to reconnect the students with their roots to help them have more confidence in themselves, explained Dr. Carlos, professor in the Political Science and Chicano Studies department of CSULB.

According to Dr. Carlos:

It’s said that we Mexicans in the United States are ‘neither from here nor there,’ but the reality is that we want the students not only to know [about their roots] but that they also feel that they are from here and from there, that they have pride in being binational and to know both languages, English and Spanish.

Which leads me to the next item…

Mexico recognizes the young DREAMers as a growing network of potential bicultural leaders, social entrepreneurs, allies for development and holders of rights.

And the website helpfully points out that “[d]uring the last three years, the Government of the Republic [=Mexico] has carried out actions to offer more and better services to Mexicans outside the country.”

(Why “The last three years”? That’s how long the Enrique Pena Nieto administration has been in office).

So what has the Mexican government done for these “Mexicans outside the country”? Here’s what the Presidential website says:

Remember that Mexico has a vast consular network in the United States, including the Embassy in Washington, 50 consulates, and “mobile consulates.”

Almost no American politicians speak out against the way these institutions meddle in our affairs.

The Mexican Presidential website “estimates that in the United States there is a community of Mexican origin of more than 35 million persons, of which 11.6 million are born in Mexico.”(Note: they’re including Judge Curiel.) It also claims “persons of Mexican origin contribute 8% of the gross domestic product of the United States” and that “approximately 8 million American jobs depend upon economic activities carried out by illegal aliens.”

No matter how often Open Borders boosters make these claims, I find them questionable. How much of this “economic production” is just the transfer of American-origin funds to Mexican workers? How is that producing anything?

And any statistics about the wonderful economic results of illegal immigration need to take into account the negative effects e.g. transfer payments like education etc.

White Puerto Rican astrologer Walter Mercado (aka Shanti Ananda), famous throughout Latin America for decades, has made his prediction about the 2016 U.S. presidential election:

I believe that Hillary Clinton has all the possibilities and I call for them to support her and vote for her. I believe that Hillary Clinton is the new face for the United States for the experience that she had, and that she will be able to apply, now in this moment of her life when feminine energy is most needed in the American presidency. Feminine energy is what she creates.”

As for Trump, Walter Mercado said he is “loco” and “monstruo.”

Sounds good to me! 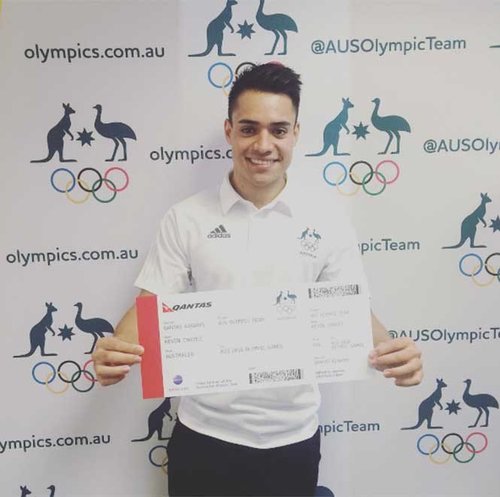 Mexico’s Excelsior has an article about a Mexican diver competing in the Rio Olympics on the Australian team, Kevin Chavez Banda, who took out Australian citizenship so he could compete on the team.

Note that Chavez was not an immigrant who happened to join the Australian diving team. He was an accomplished Mexican diver already. He moved to Australia, and naturalized as an Australian, specifically for competitive reasons. But he still considers himself Mexican.

“I love, respect and admire my country. This is what I am thinking of when they ask about Mexico.” That’s what Chavez said on his social media.

There really wasn’t much to the article, and the diver, by the way, didn’t win a medal. As often, it was in the comments section where the real battle raged.

Some defended his decision to naturalize and compete for Australia. Others didn’t. For example:

Hay que parar a Trump  [“Trump must be stopped”] is a piece by Gaspar Orozco published August 1st in La Opinión.

He must be stopped because he’s going to hurt Mexican-U.S. relations and put the stability of the world at risk.

Orozco ends with these stirring words, that rank right up there with JFK.

The time will come when we are asked the inevitable question, “And you, what did you do to stop Trump?” The answer, that we must give to our children, our community and ourselves, depends upon each one of us.

Who is this Gaspar Orozco? Well, his bio tells us: “Gaspar Orozco is a writer and career [Mexican] diplomat. He has been consul of community affairs in New York and Los Angeles, among other assignments.”

Orozco [Email him] is listed on the New York Consulate’s website as Consul in charge of Community Programs.

Orozco is also currently the Associate Director of the Jaime Lucero Institute of Mexican Studies, which is part of the (American taxpayer-funded) City University of New York. (Email Chancellor James Milliken).

It’s yet another example of the arrogance of various elite Mexicans who meddle in the United States—men like Jorge Ramos, Vicente Fox and Jorge Castaneda. The Mexican elite treat the U.S. as a colony of Mexico.

But seeing how our own leaders allow and even facilitate this, you can understand why they think they can get away with it. After all, they are getting away with it.

And they fear a Trump triumph because it’s the first time their racket might be in jeopardy.