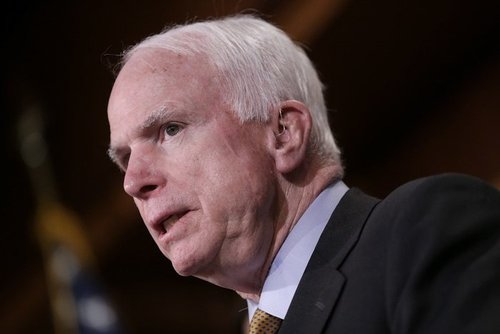 As Trump rises in the polls by breaking the bipartisan taboo on telling it like it is on the border, losers like McCain (2008) and Romney (2012) with their well-paid minions bash Trump and his supporters.

This is the GOP insider gang, remember, that lost the last two presidential elections.  Why should anybody care what they have to say about politics?

John McCain, who lost in 2008 to Obama, was interviewed by the New Yorker's Ryan Lizza, and had much to pontificate about, as reported in John McCain Has a Few Things to Say About Donald Trump.July 16, 2015.

It's worth perusing only to show us how out-of-touch McCain and the GOP elite are.  Lizza writes

Donald Trump held a rally in Phoenix, Arizona....Not every Republican in Arizona was pleased with Trump's visit.  Senator John McCain, the Party's Presidential nominee in 2008, reacted to the event with dismay.

Of course he would. McCain has been promoting amnesty, Hispanicization and open borders for years.

"It's very bad," McCain, who was eager to talk about Trump, told me on Monday [July 13th] when I stopped by his Senate office.  The Senator is up for reelection in 2016, and he plays close attention to how the issue of immigration is playing in his state.  He was particularly rankled by Trump's rally.  "This performance with our friend out in Phoenix is hurtful to me," McCain said.  "Because what he did was he fired up the crazies."

McCain...has been at war with the far right in Arizona for years.  "We have a very extreme element within our Republican Party," McCain said.  He then noted that he was personally censured by Arizona Republicans in January of 2014 and has been fighting to push out the extremists in the state G.O.P ever since.  "We did to some degree regain control of the Party."

But McCain fears that Trump may be reversing those gains.  "Now he galvanized them [the "extremists"]," McCain said.  "He's really got them activated."

I hope McCain is right about that.

McCain probably has more experience navigating the issue of immigration than any other national Republican politician.

Translation: McCain has been an Open Borders fanatic for years.

...McCain worried that Trump might have more staying power than many political analysts assume.  And, even if he slips in the polls, Trump's attacks on immigrants and his focus on the porous border will have a warping effect for Republicans.

By "warping effect", McCain means more pressure in the primaries to secure our border.

"We'll see how this plays out, but there is some anger in my state," McCain said.

Well, duh, Arizona is under invasion, an invasion you have facilitated.

[McCain] mentioned the continuing challenges of border security that were vividly highlighted when tens of thousands of Central American minors crossed into America last summer.  "People who otherwise might be more centrist are angry about this border situation."

It sounds like McCain is more concerned about support for Open Borders than the actual situation on the border.

And guess who McCain is supporting in the primaries?

McCain is an ardent backer of his good friend  Senator Lindsey Graham who is languishing in the G.O.P. Presidential primary polls. [McCain] noted that Graham has been one of the few Republicans to condemn Trump in strong terms.

That tells us where Graham stands, though we knew already.

McCain, who is eighteen years older than Graham, sounded like a proud father.  "Lindsey said this is a moral test for our party.  He put on a very strong performance," McCain said.  "Of course, Lindsey was one of the eight of us who negotiated immigration reform [amnesty].  Lindsey never backed away from it."

Can somebody in Arizona please run against McCain in the GOP primary and get him out of the Senate?