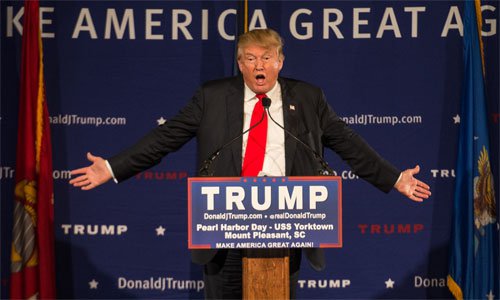 For my best birthday gift this week, Donald Trump called for blocking Muslim immigration to the United States. If he throws in all immigration, it will be my merriest Christmas ever.

By contrast, the eunuchs running against Trump went mental.

Rubio's idea for stopping Muslim terrorist attacks on U.S. soil is something simple: Launch several wars to clean up the entire Middle East.

Chris Christie called Trump's plan "ridiculous," saying, "This is the kind of thing that people say when they have no experience and don't know what they're talking about."

People with "experience" say things like: Walls don't work and are "too expensive."

Ted Cruz said he disagreed with Trump and instead would focus on "radical Islamic terrorism." Cruz will have a lot more radicals to focus on if we keep importing a quarter million Muslims every year.

And these were Republicans. MSNBC acted as if the nation had come under terrorist attack (by a Muslim immigrant) with its round-the-clock, breaking-news coverage of Trump's proposal, rife with images of dangerous demagogues from George Wallace to Hitler.

People without real arguments call anything they don't like "racist" or "unconstitutional."

Trump's proposal is neither—I won't waste space mentioning 100 years of constitutional law and practice, but of course our country has absolute authority to decide who gets to immigrate here.

In the 14 years since Muslims killed 3,000 Americans on 9/11, this country has admitted another 1.5 million Muslims. So we're xenophobic, bigoted racists if we don't make it 2 million? Three million? When will we have enough? How many murdered Americans is an acceptable number before we can shut off the spigot of Muslim immigration?

The amazing thing is that no one (except the American people) wants any pause in Muslim immigration—even after more than a dozen Muslim terrorist attacks on our soil in the last 15 years.

House Speaker Paul Ryan announced that he will refuse to consider cuts to Muslim immigration, saying, "That's not who we are."

Republicans are totally copacetic with Pew's recent finding that white Christians are now a minority in America, but furious with Trump for suggesting we take a break from importing Muslims.

Can we move them to Ryan's district? According to Pew, only 11 percent of Muslims are Republican or "lean Republican." They may not make the "best Americans"—as Ryan claims—but at least they'd get rid of him.

The hysterical demand for never-ending Third World immigration has gone beyond the rich's need for cheap servants and the Democrats' need for voters. It's a mass psychosis.

Everyone acts as if Pakistani pushcart operators are the same as American blacks, and we're required to bring them here to make up for the legacy of slavery.

Foreigners aren't the descendants of American slaves! The rest of the world does not have a civil right to move here. We're under no moral imperative to allow any immigration at all. We don't owe citizens of other countries anything.

But as long as you brought it up: They owe us. America runs around saving other countries from tsunamis, earthquakes, pirates, disease, starvation, warlords, dictators, Nazis, communists—then their citizens show up full of grievances, as if we owe them.

Angry Muslims have been popping up all over TV to denounce Trump and complain about anti-Muslim bigotry in the U.S. If they'd prefer a country with a larger Muslim population and no white devil oppressors, low-rent mud huts are available in any of about 50 Muslim countries around the world. First month free; after that, two goats a month.

In addition to the thoughtful policy objection that Trump is a racist, we've been treated to an endless stream of stunningly stupid arguments against Trump's proposal.

Yeah, nor can our government.

Given the devastation caused by only two Muslims in San Bernardino, eight Muslims in Paris, two at the Boston Marathon, one at a Chattanooga military recruitment center, one at Fort Hood, 19 on 9/11, etc. etc.—it's really irrelevant whether "most" Muslim immigrants are peaceful little lambs. It doesn't take a lot of them to create havoc.

I don't know why we need any.

While it's fantastic news that most Muslim immigrants aren't terrorists, as Samuel Johnson said, "A horse who can count to 10 is a remarkable horse, not a remarkable mathematician."

We want remarkable Americans, not immigrants whose selling point is: "hasn't blown anything up yet." What's the upside of admitting 250,000 poor, culturally backward, non-English-speaking Muslims every year? When are we allowed to talk about what's good for America?

San Bernardino shooter Syed Farook's mother described his father—the original immigrant—this way: "My husband is mentally ill and is on medication but is also an alcoholic and drinks with the medicine."

Fantastic. So glad we got him. The father, who has been here since 1973—thanks, Teddy Kennedy!—told an Italian newspaper that he preached moderation to his son, saying it's not worth fighting Israel, because Russia, China and the U.S. "don't want Jews there any more." In "two years," he assured his son, "Israel will not exist any more."

So after four decades in American culture, these highly integrated, model immigrants are still clinging to their insane magic potion fantasies.

The senior Farouk didn't come here to work in some highly complex technical field, like nuclear physics or cell extraction biology. He's a truck driver. So one American lost his job as a truck driver and 14 Americans lost their lives because of Ted Kennedy's 1965 immigration act.

How else have the 1.5 million Muslims admitted since 9/11 made our country better? Their massive welfare use? Overburdening our schools and hospitals? The machete attacks? The clitorectomies? The honor killings? The occasional terrorist attack?

Currently, there are more than a thousand active investigations of ISIS in all 50 states. Here's an idea: Instead of paying for an ever-expanding federal workforce to track, wiretap and investigate immigrants with possible terrorist sympathies, let's stop bringing them in!

Beginning to sense the public's fury, a number of Republican politicians have been trying to talk tough on immigration. This week, Trump proved that that's all it is: talk.