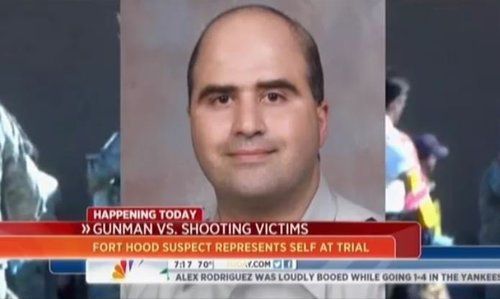 Finally. Four years after Maj. Nidal Malik Hasan walked into the Soldier Readiness Processing Center at Fort Hood, Texas, and perpetrated the bloodiest massacre ever on an American military base, the self-confessed jihadist's court martial proceedings began this week. Have you forgotten?

Americans obsessed over the O.J. Simpson, Casey Anthony and Jodi Arias trials. Gun-control lobbyists turned Newtown, Aurora and Tucson into national awareness-raising, fundraising and legislation-promoting campaigns. But where are the celebrity lobbyists and high-profile advocates for the victims of bloodthirsty Muslim vigilante Nidal Hasan?

His PowerPoint slide presentation to fellow Army doctors was titled: "The Koranic World View As It Relates to Muslims in the U.S. Military." Hasan warned: "It's getting harder and harder for Muslims in the service to morally justify being in a military that seems constantly engaged against fellow Muslims." And: "We love death more then (sic) you love life!" As first reported by Pamela Geller, Hasan carried an official calling card with the designation "SoA (SWT)"—for "Soldier of Allah" and "Subhanahu Wa Ta'ala" (Islamic for "Glory to Him, the Exalted").

Hasan told his superiors he was not alone among Muslim soldiers who believed they "should not serve in any capacity that renders them at risk to hurting/killing believers unjustly."

He reminded the Army of the fatal 2003 fragging attack on American soldiers in Kuwait by Sgt. Hasan Akbar (who was sentenced to death but remains alive while his case drags on in appeal) and the desertion case of Lebanon-born Muslim Marine Wassef Ali Hassoun.

A Joint Terrorism Task Force had been monitoring Hasan's communications with jihad spiritual leader Anwar al-Awlaki all along. But the military was not notified. Even without that information, military officers expressed concerns privately that Hasan might leak classified information to terror groups if he were deployed and that he was capable of committing a fragging.

Yet, they were prepared to deploy him anyway and did nothing to remove him from his job. One email from an Army investigator before the Fort Hood massacre fretted: "Had we launched an investigation of Hasan we'd have been crucified."

Instead, 13 soldiers and one unborn child were slaughtered and paid with their lives for our country's reckless political correctness and bureaucratic fecklessness.