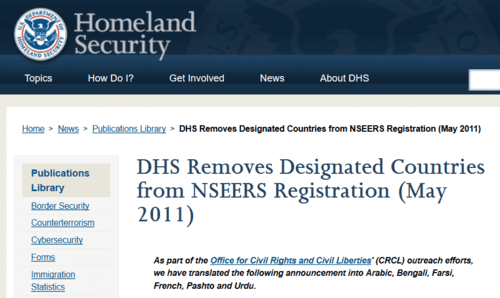 National Security Profiling (Of Ethnicity, Nationality And Religion) Is a No-Brainer

Calm down and think, America.

While everyone's undies are in a bunch over Donald Trump's proposal for a Muslim immigration moratorium, it is undeniable in a time of "heightened alert"—when violent jihadists have no problem targeting their enemies here and around the world—that national security profiling is imperative to our survival.

Yes, that means unapologetic government tracking of Arab and Muslim foreign students, high-risk Muslim refugees, Muslim chaplains serving in the military and in prisons, and Arab and Muslim pilots and flight students.

All temporary visa-holders—foreign students, tourists, businesspeople and guest workers—are here by privilege, not by right. Their visas can and should be revoked whenever necessary to protect national security.

It is not "un-American" to bar any new religious visas for dangerous Muslim clerics or to freeze visas issued to travelers from official state sponsors of terrorism.

It is not contrary to our "values" to prioritize the immediate removal of all illegal visa overstayers and deportation fugitives from terror-sponsoring and terror-supporting nations.

Should we have a special registration system for visa holders from jihadist strongholds? Hell, yes. After 9/11, the feds put in place a National Security Entry-Exit Registration System that required higher scrutiny and common-sense registration requirements for individuals from jihad-friendly countries including Afghanistan, Indonesia, Iran, Iraq, Jordan, Libya, Pakistan, Saudi Arabia, Somalia, Syria and Yemen, as well as other at-risk countries.

The basic components included a more rigorous application process in light of the shoddy visa questionnaires and undetected overstays of the 9/11 hijackers; 30 extra minutes of interviewing at ports of entry; a digital fingerprint check and in-person registration after they arrived in the interior of the country; and verification of departure once they exited.

The targeted registration of certain foreign nationals already in the country (temporary visa holders including students, tourists and businesspeople) resulted in the detection and apprehension of at least 330 known foreign criminals and three known terrorists who had attempted to come into the country at official ports of entry—including suspected al-Qaida operatives who were caught trying to enter the U.S. after their fingerprints matched ones lifted by our military officials from papers found in Afghanistan caves.

But as I've reported previously, grievance-mongering identity groups, the American Civil Liberties Union, the late Ted Kennedy, and open-borders Republicans could not stand the idea of an effective national security profiling database. The Obama administration, which now disingenuously calls on Americans to be "vigilant," suspended the narrowly targeted NSEERS program in 2011 to appease the "Islamophobia!" shriekers.

Anti-profiling radicals want it both ways. They damn federal homeland security officials when they gather intelligence based on threat factors and behavioral factors—and damn them in hindsight if they don't. FBI agents are condemned as bigots when they attempt the most modest of surveillance measures, and they are damned as bumblers when they fail to act on information gathered through those means.

Perhaps you've forgotten how Muslim groups balked after 9/11 when federal investigators went to mosques to ask about knowledge of terrorist attacks. What were they supposed to do—go to Catholic nunneries and Buddhist temples instead?

Face it: Religious profiling is an essential tool in combating Muslim extremists carrying out an eternal religious crusade to kill nonbelievers and establish a global caliphate. If Catholic, Protestant, Jewish or Hindus were financing and training a worldwide network of bloodthirsty jihadi operatives, America would be thoroughly justified—obligated—to gather basic intelligence data on relevant churches, congregations or temples.

Those who moan about any form of ethnic, religious and nationality profiling now will be the first to attack federal officials for not enough when another terrorist attack occurs. I'll never forget hypocrite Maureen Dowd, The New York Times' resident chaise lounge general, after the FBI admitted that it had resisted Phoenix FBI agent Kenneth Williams' recommendation to profile Arab/Muslim flight students in the summer of 2001:

"Now we know the truth," she whined. "The 9/11 terrorists could have been stopped if ... the law enforcement agencies had not been so inept, obstructionist, arrogant, antiquated, bloated and turf-conscious, and timid about racial profiling."

Gee, Mo, what do you think caused that timidity? Hmm?

And let's remember amid this latest outbreak of anti-profiling hysteria that the same grievance groups who object to taking ethnicity, religion and national origin into account during wartime zealously defend discriminatory racial and ethnic classifications to ensure "diversity" on college campuses, guarantee government contracts for minorities, and achieve manufactured "parity" in police and fire departments.

In suicidal America, there's always a "compelling government interest" for using discriminatory classifications—unless that compelling interest happens to be the nation's very survival.