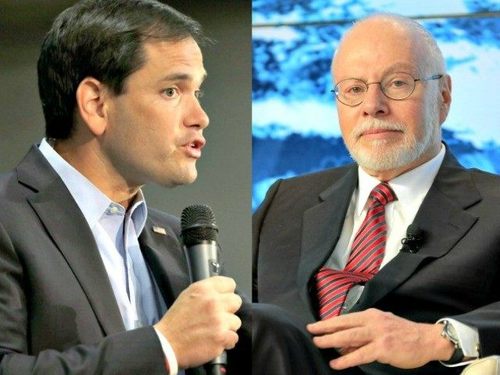 In September 2013 I posted Syria: Why Are Boehner And Cantor Defying Base And Ignoring Country? Because They Have ADD! This discussed the curious fact that despite enormous hostility from the public the GOP leaders were supporting an Obama plan for military intervention in Syria. I put it down to the influence of a few big donors, notably Sheldon Adelson

Happily back then with the next Presidential campaign far off the donor “Circle of Activists” could not exert enough pressure.

Sadly now they seem to have tightened their grip, and most GOP Presidential aspirants (no doubt egged on by loot-crazed consultants) are scrambling to supply them with what they want: American blood on Syrian soil.

Republican presidential candidates Ben Carson, Marco Rubio and Jeb Bush said they would go further than the Obama administration has to stop Islamic State in Syria and Iraq…

Messrs. Carson and Bush said in interviews broadcast on Sunday that they would go beyond the current administration, establishing either a no-fly zone in Syria or a similar “safe zone” to protect opposition forces fighting embattled Syrian ruler Bashar al-Assad…

“My much, much, much bigger plan involves Putin and Iran also,” Carson said on ABC’s “This Week.” “Those are the forces that are propping up the Assad regime, even though Putin came in there and said he was going to fight ISIS, he’s really fighting the anti-Assad forces.”

Carly Fiorina described the president’s plan as “too little, too late” ...Sen. Lindsey Graham (R-S.C.) said “Sending 50 American Special Forces into Syria in the eyes of ISIL shows that Obama is not all-in, it is a sign of weakness to ISIL… I see Russia and Iran mopping the floor with Obama and Kerry,”

This is going to be an electoral disaster. In 2012 when Sheldon Adelson purchased control of the Romney campaign and forced that feckless individual into the belligerent stance I noted in The Definitive Word On Romney's Israel Grovel, the result was a collapse in key support: Subservience To NeoCons Costing Romney White Blue Collar Women Vote. All the Democrats have to do is stay silent.

Donald Trump was excluded from the Talk Shows this weekend. The managers must have wanted uninterrupted war drum beating. As The Wall Street Journal sniffed

Dissenting from the war choir could win Trump a lethal competitive advantage here. And, of course, more hatred from powerful people.