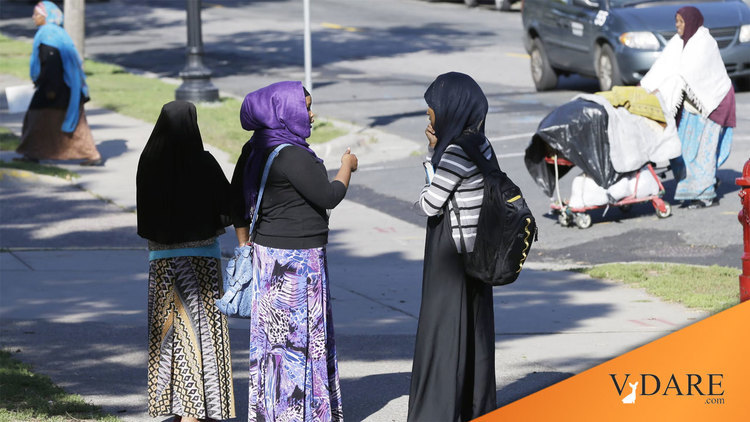 [VDARE.COM Note: Only two years ago, Lewiston, Maine, was referred to by name in the LA Times -  and even by VDARE.COM! -  as a stereotypically "homogeneous place." See "Diversity Causes Bowling Alone." By Steve Sailer.]

Brenda Walker writes: Lewiston, ME, the one-time factory town of 36,000, now permanently downsized in America's post-industrial economy, was in the news recently for the titanic struggle between good and evil there - or at least so it seemed to the 4,000 participants in the January 11 anti-racism, pro-diversity rally as they bravely locked arms against the threatening specter of at least two dozen white supremacists descending on the town.

Lewiston has been getting a lot of attention for its difficulty with the sudden influx of Somalis — from zero in the beginning of 2001 to 1-2,000 now. The Somalis are known for their clannish ways, and decamping to the USA has evidently done little to diminish them. A scout, or sahan, is sent out looking for better hunting (welfare). When a suitable grazing ground (subsidized housing, food stamps) is found, the rest of the clan is told to come.

Interestingly, many of the current Lewiston Somali refugees came from Clarkston, Georgia. But the Somalis were unsatisfied with that community in their search for a better life. One Abdullahi Abdullahi, president of the Clarkston Somali Community Development Organization, explained: "Maine is crazy cold, but the welfare system is much better."

Official Lewiston was taken aback by the enormous uptick in costs for education, welfare and social services. Mayor Laurier Raymond wrote a letter pleading with Somali clan leaders that they tell their relatives not to come, at least not all at once: "We have been overwhelmed and have responded valiantly. Now we need breathing room. Our city is maxed-out financially, physically and emotionally."

For expressing the simple financial realities of his city, Mayor Raymond has been called every name for racist.

The dueling rallies that took place in Lewiston on January 11 were a result of the Church of the Creator sensing an opportunity to preach storm-trooper-style white power. This sparked a counter-rally to express solidarity with Somalis and a disavowal of racism. A local college organized the pro-diversity rally that drew 4,000 participants, including Maine's entire Congressional delegation. Black author Shelby Steele has called similar expressions of guilt-relieving liberalism "an illusion of moral redemption."

The usual suspects in academia and the press have been energetically trying to convince Mainers that the state is too white and that more diversity is needed.

The real questions about serious cultural differences - such as the nearly universal practice in Somalia of female genital mutilation (FGM) - remain hushed up. Despite assurances to me from the Lewiston Sun Journal, only one article in that paper about the Somali influx into Maine even mentions the FGM variety of cultural child abuse.

The Lewiston Sun-Journal [email the editor – or publisher etc.] refused my (liberal, feminist) California perspective. No doubt that's because I did not engage in cartoonish celebrations of diversity.

All Americans should consider the kinds of cultures we are allowing so mindlessly. Honesty about other societies may be politically incorrect. But it does offer some hope of stopping the rush to create an America of balkanized bedlam.

THE BRENDA WALKER OP-ED THAT THE LEWISTON SUN-JOURNAL REJECTED:

It's time for a better discussion about race, culture and gender.

It's not exactly a daring position to be against racism these days, but its enthusiastic rejection, exhibited recently in Lewiston, is surely a good sign for the nation's evolution away from the shame of the past.

However, it is a mistake to confuse race with culture. While racism is deeply repugnant, many cultures hold beliefs and practices that all Americans should find abhorrent, including a terrible variety of cruelty toward women and girls. When we consider slavery, honor killings, female genital mutilation (FGM) and arranged marriage, we should reject the mistaken basis of multiculturalism, namely the idea that all cultures are morally equal and worthy of respect.

Would the reader want to raise a daughter in Saudi Arabia where she could not drive a car or reveal her face? Does being humane include tolerance toward criminal brutality when it is cloaked in culture? Should America forget its proud history of leadership in women's rights and safety in the name of "diversity"?

How exactly did the proper rejection of racism morph so disastrously into the uncritical acceptance of diversity? The world is home to all sorts of objectionable cultural practices, but when one of these cultures moves in next door, we are urged to celebrate diversity, no questions asked. Furthermore, some multiculturalists even say that assimilation is racism.

The problem with having thousands of Somalis arrive en masse into a community is not their skin color but their culture. According to the World Health Organization (WHO), the prevalence in Somalia of female genital mutilation is 98 percent — virtually everyone, then. The WHO also notes that 80 percent of the procedures are of the infibulation type, which is the most extreme form, where most of the vagina is removed and exterior vulva is stitched together leaving a small orifice for urine and menstrual fluid.

Following the trauma of this horror, the little girl's legs may be tied together leaving her immobilized for several weeks. The procedure is generally done by old women who have no knowledge of anesthetics and antiseptics.

Sometimes the girl dies from blood loss and shock.

In other words, the most brutal abuse and torture of children are a normal part of Somali culture. Any American who cut away a child's genitals would be arrested immediately, but when the unpleasant subject of FGM among immigrants is mentioned at all, we are told by the diversity proponents that this criminal behavior is a cultural choice.

Last October, the U.S. government considered banning Somali refugee families because they still practice this brutality. Actually, FGM was made illegal in the United States in 1996 by Congress: such has been the effect of diversity on America that a law against castrating little girls is now necessary.

But don't Somalis put aside this cruelty and assimilate to American values? Indications are that FGM persists, but has gone underground because of its illegality. Parents may arrange for a girl's visit home to have the procedure done away from prying law enforcement eyes.

For example, a New York Times article described a Houston Somali math teacher vowing to send his daughter to Somalia to be cut. His wife observed, "We were taught that this was a way of ensuring a girl's good behavior. It prevents them from running wild. Women should be meek, simple and quiet, not aggressive and outgoing. This is something we just accept."

Have Somalis brought this abominable practice with them to America or have they left it behind?

Their neighbors have a right to know.

It would be reassuring if the Somali elders would repudiate the hideous practice and state that no Somali children in Maine have been so harmed or would be in the future.

Whatever the case, American women should be more concerned about misogynous cultures being welcomed thoughtlessly, as if women's rights and safety would not be affected.

Surely we cannot have a stable, equitable community when there are two different cultural standards of behavior.

By carelessly accepting the idea that all cultures are morally equal, we tacitly disown our homegrown American values of women's rights and the protection of innocent children.

Are people so afraid of being called racist that they cannot speak out against unspeakable cruelty to girls?

The bottom line is this: we can have multiculturalism or we can have women's equality. We cannot have both.

The belief in cultural equivalence may be comforting, but it unfortunately has no relation to the human race as it is.

Brenda Walker [email her] is a writer living in California. She publishes two websites, LimitsToGrowth.org and www.ImmigrationsHumanCost.org. The issue of immigration and women's rights may be further pursued by opening LimitsToGrowth and clicking on the burqa lady.