Somali Immigrant Barkhad Abdi Is a Nominee for Academy Award: "He Has a Rap Sheet"

It’s curious that immigrant Somali Barkhad Abdi has gotten so little publicity regarding his Oscar nomination for Best Supporting Actor in the film Captain Phillips, based on the true story of diverse piracy on the high seas.

Perhaps Abdi suffers from a lesser level of blackness in the Hollywood scheme of values, where historical slavery is the most important fact about black Americans, and therefore Twelve Years a Slave has gotten the big buzz for Best Picture and other awards. 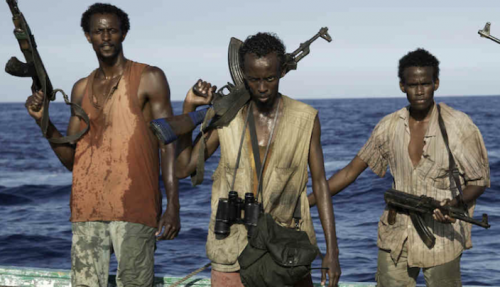 I tried with no luck to find a film clip showing the Navy SEALs doing their excellent sharpshooting that saved the real Captain Phillips, and this trailer was the closest.

Barkhad Abdi lived in Somalia as a boy before relocating to Minneapolis and has dreamy memories of the homeland typical of immigrants. It was “beautiful” and “Everyone loved each other, everyone was a neighbor, there was a community.” Until they started killing each other in tribal warfare.

Seriously, Abdi didn’t have to do much acting. “I understand the pirates’ motive,” he observed. “They wanted money.”

Plus, he is personally familiar with crime (like lots of Somali immigrants), having committed fraud and illegal drug possession. But he doesn’t seem to have been deported.

Now Abdi hopes for a big Hollywood payoff with a thespian future.

The first-time Oscar nominee for Best Supporting Actor has received several trophies so far this season, including Best Supporting Actor at the BAFTA Awards. The 28-year-old goes up against Golden Globe winner Jared Leto, and seasoned Hollywood actors Bradley Cooper, Jonah Hill, and Michael Fassbender at the 2014 Oscars on Sunday, Mar. 2.

Here are five things to know about the new guy in Tinseltown:

1. Captain Philips Was His First Role Ever
With no prior acting experience, director Greengrass cast him in the role of pirate leader Abduwali Muse opposite Tom Hanks’ Captain Phillips. “That’s why I got the job, they had to have a Somali person play it,” Abdi told The Daily Beast of scoring the role opposite two-time Oscar winner Hanks. “I understand the pirates’ motive,” he continued. “They wanted money. They were desperate guys.”

2. He Was a Taxi Driver Before Captain Phillips
Abdi was working multiple gigs in Minneapolis — as a taxi driver, store worker, and DJ — when he saw on TV that producers were holding auditions for the film. “You know it never hurts to try,” Abdi told Us Weekly back in October of pursuing a dream. “That’s what I did, you know.” Despite a dizzying awards season, the newly-minted actor said he would do it again in a heartbeat — and if all else fails? “I’m going to go back to driving a taxi,” joked Abdi, now in talks for another fact-based film, The Place That Hits the Sun.

3. He Witnessed Civil War in His Native Somalia
“Growing up in Somalia was beautiful, honestly,” Abdi told the Daily Beast. “Imagine a very peaceful place. Everyone loved each other,” he explained. Then at age 6, Abdi witnessed the outbreak of a civil war in his home country in 1991. “It turned overnight to chaos, killing and guns,” he said. “You would find guns everywhere, bullets and bullet parts. There were bodies outside. It was a very scary time for me and my family.” Abdi eventually escaped and moved to Yemen, and later, America. He immigrated to the U.S. at age 14 to Minneapolis with his family.

4. He Scared Tom Hanks the First Time They Met
Abdi’s first time ever speaking to Hanks was in character. The line? “I am the captain now,” Abdi recalled to the Daily Beast. “I had to scare him. Since I admire him that was hard for me. He was more Captain Phillips than Tom Hanks and that made me more my character than me. We kept our distance during filming and didn’t go out for dinner until afterwards.”

5. He Has a Rap Sheet
Abdi has been arrested and charged with fraud and drugs possession, on multiple occasions. “I wasn’t a complete man,” Abdi admitted to the Daily Beast, speaking about the charges for the first time. “I made mistakes to satisfy certain friends and to be cool and I took the consequences. I look back and smile now. Now I know not to do that, and how serious it was.”