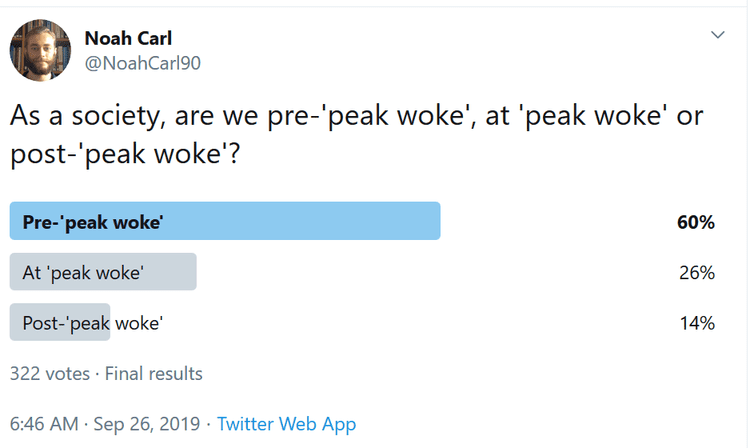 Are We At Peak Woke? Probably Pretty Close!

British political scientist Dr. Noah Carl has thrown himself into his research since being fired by Cambridge University earlier this year for conducting studies which the Social Justice Warrior mob didn’t like. Undeterred by the angry “Woke” anti-scientists who successfully pressured for his dismissal, Carl has asked a fascinating question: “Have we reached peak-Woke?”

In this Clown World where biological males compete in female sports, unisex restrooms have been imposed for the sake of “non-binary” people, and a “point of privilege” can be raised at political meeting against whispering and the use of the familiar term “guys” [Democratic socialists convention erupts due to 'sensory overload,' gendered pronoun usage, by Gregg Re, Fox News, August 4, 2019], can things really get any more insane?

According to Carl’s poll—in which his Twitter-follower voters had a choice between whether we were at pre-“peak-woke” at “peak woke” or post-“peak woke”—we are at pre-“peak-woke”…but only just. In other words, things will get worse, but there appears to be a certain confidence that the tide will turn.

Of the 322 people who voted—many of whom are quantitatively trained academics, who are experienced in constructing predictive models and who thus are likely to have a nose for the direction of data—60% felt that we are pre-“peak woke,” 26% voted “At ‘peak-woke’” and just 14% felt that we were beyond the heights of wokeness. In other words, a large minority of the “finest prognosticators on twitter” concluded that we were either at peak-woke or post-peak-woke . So it is clear in what direction these people believe society is essentially moving.

Indeed, many of the voters wished to qualify their vote. Comments, when Carl closed the poll and announced the result, included:

Others opined on what “peak-woke” would look like. It could involve biological males beating females in the Olympics. Or, as one voter put it:

Wait until the millennials are in societal leadership positions in 5 to 10 years’ time and Gen z are all in their 20s, that’s when we’ll hit peak woke.

You might be inclined to dismiss Carl’s poll as meaningless. A group of Carl’s followers have expressed an opinion. So what?” But there are reasons to take it quite seriously. 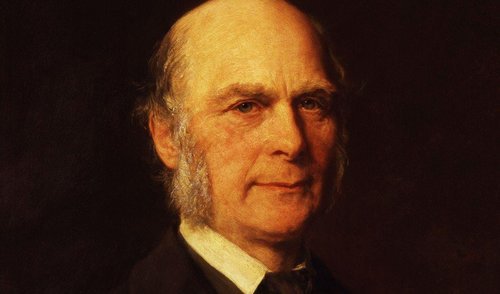 British inventor and polymath Sir Francis Galton—a hate-figure for the “Woke” due to his interest in heredity—is famous among other things for his concept of “the wisdom of the crowd.” Crowds of people are more likely to reach accurate conclusions than are individuals, even if those individuals are experts.

Galton noted the most well-known example of this phenomenon: In 1906, he was at a fair in Plymouth in south west England. Eight hundred people took part in a competition to win a slaughtered and dressed ox. To win it, they had to accurately estimate its weight. Galton observed that the median guess, which 1,207 pounds, was accurate to within 1% of the true weight, which was 1198 pounds [Vox Populi, by Francis Galton, Nature, March 7, 1907 PDF].

This finding has been replicated again and again. However, crowds are more likely to be correct when there is an objective answer—such as was the case with the weight of the ox—than if the question lacks such a clear answer, as in how “woke” society has become.

There is a certain kind of person who is particularly good at making correct predictions and estimations. In recent years there have been attempts to identify these so-called “Superforecasters” systematically and work out why they so often get things right. There was even a popular book on this “Good Judgement Project” in 2015:  Superforecasting: The Art and Science of Prediction, by Philip E. Tetlock and Dan Gardner.

Psychological analyses of the best superforecasters has found that they tend to have high general intelligence—both fluid (solving novel problems, often based on evidence) and crystalized (solving highly abstract problems). In addition, they are highly competitive and driven. And they are happy to change their minds if new evidence implies that they should [Superforecasters: The Art of Accurate Predictions, Association for Psychological Science, November 5, 2015].

In other words, superforecasters are obsessed with the objective truth, meaning they are not very ideological. And they have masculine traits, such as drive, that have been shown to be associated with researching and being open to controversial areas of science and being fascinated by the truth.

Controversial “genius” scientists, for example, who don’t care about offending people in the pursuit of the truth have been shown to have these kinds of traits. (All this is discussed further in The Genius Famine, by Edward Dutton & Bruce Charlton.)

So we might cautiously expect that the kind of people who follow Noah Carl would be reasonably good at forecasting.

That, combined with the wisdom of the crowd aspect to Carl’s poll, means we can draw a tentative conclusion: Although we are not yet at “peak woke,” the winds are changing and wokeness momentum probably diminishing. We may well reach “peak woke” relatively soon.

And then we can expect the backlash to become as fierce as wokeness is today.