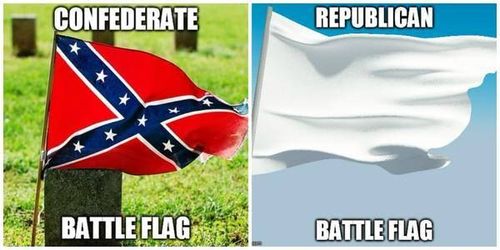 A Northerner Defends Southern Traditions, Including The Battle Flag

This post-Charleston anti-Confederate feeding frenzy reminds me of something Glenn Reynolds explained after Newtown. It goes like this in the Cultural Marxist mind: “(1) Something bad happened; (2) I hate you; so (3) It’s your fault.” One very twisted young man committed a despicable act, and of course this means that the Confederate flag must disappear from American life.

I have no known Confederate ancestors. If I did, I would hope to keep faith with their memory and my regional traditions. The Battle Flag is a part of Southern heritage. Of course the Civil War was largely about slavery. But it was not only about slavery. The flag question goes much deeper than slavery and race. As it happens, I’m originally from New Jersey so I try not to live down to that state’s traditions. I’m passing as a Pennsylvanian now.

The Confederate states insisted on their right as sovereign states to leave the Union. It matters not the reason. The Union victory ended slavery, although this was not Abraham Lincoln’s stated intention when the war began. It also ushered in the process by which we are all now facing incremental slavery due to the progressive extension of Lincoln’s Union.

Of course Lincoln didn't mean it to get this far. Leaders are always failing to understand that the things they set in motion will remain in motion long after they are dead. I doubt that Franklin Delano Roosevelt foresaw the centralized alien monstrosity he fashioned. He thought that however strange the people he welcomed into power as his apparatchiks, mandarins like him would always retain control.

God knows what will become of the Supreme Court’s decision to call mandates taxes. Future generations will pay for that after many of us are gone.

So what does the Confederate flag mean to the rest of us? I see it as a necessary symbol of that ornery impulse that rests in the hearts of all real Americans. Our founders were not submissive toward the crown. People who were not supposed to be there settled the West. Americans who wrested land from a neighboring power to rule themselves settled Texas.

We Americans have always preferred at least the illusion of local control. At heart we have always had a grudging admiration for those who refuse to bend the knee, even in a poor cause. The Confederate Battle Flag is the secret alternative flag of all of us who want to have our own say.

As actual Americans, we don’t want to be lectured by pallid urban ninnies. We want to be who we are, not peasants commanded from afar.

The very nature and motives of the people who want the Battle Flag gone is a fine reason to keep it. Put another way, whenever someone wants you to abandon part of your heritage, the healthy response is: "You first!" or perhaps something ruder. What kind of people challenge other people's traditions and historical artifacts when they are not in any way hurt?

Southerners flying their old flag hurt no one. The liberal elite isn’t harmed. But they just want to follow their own puritanical tradition of enforcing their judgments on others. They claim that the old flag is an insult to black Americans; perhaps so. But in an age when groups leverage imagined psychic harm into political advantage, this is an excellent time to draw a line against such impostures.

On a personal level, I’ve spent some time in South Carolina. I am not alone in remarking that the tenor of everyday race relations there is far superior to my northern home. Indeed I witnessed nothing but almost courtly relations between blacks and whites. I witnessed none of the wary semi-hostility typical of Philadelphia.

This being the case I was not surprised at the spiritual, non-violent black response to the horror in Charleston. The wagging tongues lecturing South Carolinians live in urban hellholes, surrounded by mindless violence. Those simple Carolinians, both black and white, still recognize mindlessness when they see it and they don’t confuse it with reality.

When was the last time the President or anyone in high office even used the word “tradition”? It's almost a lost concept. It's painfully obvious that, to the progressive mind, holding to any tradition is just an invitation to intervention and correction.

We hear a lot about our “values.” What are they exactly? They are whatever our perfumed urban elites say they are. Yet, I can remember when some of our modern “values” were illegal. The “values” of 21st Century America were the pathologies of 20th Century America.