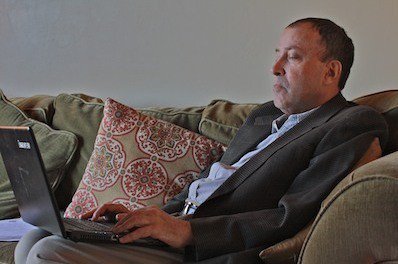 Lawrence Auster, proprietor of the View From The Right blog, died peacefully in hospice in West Chester, Pennsylvania, early on the morning of Good Friday, 2013. His death ends both a long period of often excruciating physical suffering; and a most remarkable polemicist’s career. Those of us who agree with Larry’s diagnoses of what is wrong with our world today hope and believe that his death will not end his influence.

Of course, those who view the world through the funhouse mirror of the Main Stream Media will see Auster as an obscure figure on the fringe—if indeed they know of him at all. But the reality is that for decades Larry was at the forefront in seeing and speaking about the dangers America and the rest of the West face from uncontrolled immigration, rampant diversity-worship, Political Correctness, and the encroachments of Islam via immigration and weak Western leadership.

Unlike many “conservative” writers who trim to hang on to respectability as defined by the likes of National Review and Fox News, Larry hewed to his principles throughout. As our cultural situation worsened, Larry never accommodated himself to it, neocon-fashion, but increased his warnings.

That made him enemies. But it also won him many admirers on the “Dissident Right.”. Unlike so many of us, Larry never feared speaking the truth, and never took refuge behind a pseudonym.

As long ago as the late 1980s, when very few (VDare.com’s own Peter Brimelow among them) were paying any attention to the havoc mass immigration already was wreaking on America, when the threat of unwanted demographic transformation seemed still a cloud no bigger than a man’s hand, Auster, like Isaiah, sounded the warning

In 1990, the American Immigration Control Foundation published the first of Larry’s books advocating immigration restriction: The Path to National Suicide. Larry accurately identified Emanuel Celler and Ted Kennedy’s Immigration Act of 1965 as the beginning of the end of traditional America if the flood of demographically disparate immigration it had unleashed were not stopped—as, God knows, it has not been. In the following years, AICF published two more Auster polemics, Huddled Clichés: Exposing the Fraudulent Arguments that Have Opened America’s Borders to the World and Erasing America: The Politics of the Borderless Nation. Larry’s titles never obscured his point of view!

During his career, Lawrence Auster’s articles appeared in several venues, among themNational Review, FrontPage Magazine, Human Events and The Social Contract. In 2002, Larry took over the running of the website View from the Right (VFR) from political philosopher Jim Kalb, with whom he remained close friends to the end. Thereafter VFR was the main focus of Larry’s efforts, and a forum where he refined his thinking and presented his views and comments on “the passing scene and what it’s about viewed from the traditionalist politically incorrect Right.” After 2007, he noted acerbically, he was never invited to contribute to Conservatism Inc. publications again.

For a few years, Larry kept an open comment feature on VFR. Long, sometimes contentious on-line debates frequently followed his postings. In late 2004, Larry shut down the comment feature and began a policy of generous posting of specific, often replying. In the decade and more of his proprietorship, VFR acquired a strong cult following, who dubbed themselves Auster’s “vile sycophants,” adopting a critic’s insult as their collective nom de guerre. I believe VFR’s influence was greater than it appears: not everyone who read it was willing to admit it.

If I had to label Lawrence Auster’s political and social philosophy, I should say that he was an uncompromising social and cultural traditionalist. His determination to defend tradition only strengthened as he saw society’s traditional foundations crumbling, indeed being undermined, all about him. He opposed multiculturalism and diverse immigration because they constitute direct attacks on the traditional order and composition of society. He opposed the increase of Islam in the West as another direct attack on the Christian order that built and strengthened the West, He advocated that the West separate itself from Islam as much as possible. He was scathing about Republicans and other nominal conservatives who failed to oppose radical change while diverting real conservatives from effective opposition. He recognized these imposters are more harmful to effective conservatism than declared liberals.

Larry was, by his own description, a “racialist”—unapologetically identified with and concerned for the fate of Europeans, the white race. It is fair to say that Larry shared the conviction of Jared Taylor and the late Sam Francis that Western civilization and society, the creations of Europeans, are unimaginable without Europeans.

That is not to say Western societies can accept no non-white people among their populations, far from it. But white Europeans must remain the majority and retain their cultural self-confidence—otherwise what follows will not be a differently-hued Western civilization but will more resemble Latin American countries with predominantly mestizo and mulatto populations.

Ever larger stretches of the United States now testify to the truth of that prediction.

Lawrence Auster was a native of New Jersey, by birth Jewish. He was educated at Columbia University and the University of Colorado. Larry lived on New York’s Upper West Side from the time of his return from Colorado in 1978 until very shortly before his death. It is one of several paradoxes of Auster that this uncompromising traditionalist chose to make his home in the town that (with the possible exception of Cambridge, Mass. or Hollywood CA) was the principal fount of much of what he most disliked about the ongoing transformation of America that dominated his lifetime. But there is no doubt that the atmosphere of New York City stimulated Larry. He was an unusual combination of confirmed conservative and deep-dyed New Yorker.

As the years passed, Larry grew convinced that conservatism and the preservation of tradition are not possible without religious faith. I think Larry had come to believe that the notion of a traditionalist atheist was a non-sequitur. Some of his sharpest barbs were reserved for atheists who considered themselves conservative, but that he did not believe were capable of it.

After many years of searching (I do not believe Larry never practiced his ancestral Judaism), Lawrence Auster became a Christian, being confirmed an Episcopalian at Saint Thomas Church on Fifth Avenue, a church famed for its beauty and the quality of its music. At Saint Thomas, Larry felt the presence of the divine.

In his own words, and again rather in conflict with his strong sense of traditionalism, for most of the next ten years Lawrence Auster was an un-churched (Anglican) Christian, believing in the tenets of Christianity and the divinity of Jesus Christ without actively practicing his faith.

That troubled him. But what one might think the logical alternative, the Roman Catholic Church, was a source of great irritation to Larry, thanks to the American Bishops’ and Pope John Paul II’s relentless advocacy of mass immigration, heedless of the consequences for the nations of the West.

For the last three years of his life, Larry fought a grueling battle against pancreatic cancer. After initial and onerous treatments, for a long time he was granted a remission that to him, his friends and especially his doctors, seemed well-nigh miraculous.

But, as those who know cancer know too well, it could not last. Last year, Larry’s cancer awoke with a vengeance. He continued to work in growing pain, posting at VFR until very nearly the end.

After suffering a debilitating series of intestinal and other ailments that made it impossible for him to stay on alone in New York, Larry went to stay with his friend Laura Wood, proprietor of The Thinking Housewife blog, and her family in Pennsylvania. There they helped him find attentive doctors and responsive care. Larry’s friends owe Laura and the Wood family a great debt of thanks for a great work of mercy.

Laura Wood will be leading the effort to keep his writings alive online. In particular, it is to be hoped that, under Laura Wood’s aegis, Larry’s work in the months before his death on a magnum opus long in the making that synthesizes his thinking will be completed and that the book will see print.

In the end, Larry, who in the last months of his life had focused more and more intently on trying to be a good and fulfilled Christian, overcame his reservations about the Catholic Church.

As a Catholic, I like to think that living in and being cared for in a loving Catholic household had something to do with that. Larry’s Catholic friends, and I hope his other friends as well, will be happy to know that Lawrence Auster was received into the Catholic Church this past Palm Sunday.

And so a great, and sometimes irascible and difficult, fighter for tradition and sanity has gone to his rest.. I shall miss him, and try to take courage from his example of not compromising principle in an age that punishes those who will not bend the knee to the world’s fashions.