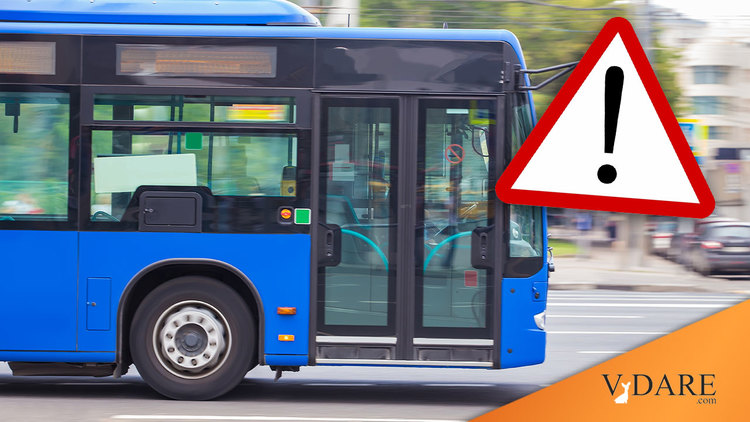 Robert Stacy McCain writes at the Other McCain:

When I got hired by The Washington Times in 1997, we moved from small-town Georgia to the D.C. suburbs in Montgomery, Maryland. I found an apartment in Gaithersburg, and told my old college buddy Patrick Carter — who grew up in the suburbs of Washington — how pleased I was with the location: Our apartment was just three miles from the northwest terminus of the Metro rail Red Line at Shady Grove Station, and there was a bus stop right next to the apartment complex, which would make my commute to D.C. much easier.

It was one thing to ride the Metro train—everybody did that—but riding the bus? Not something white people did in the D.C. area.

Now, as it happened, on most days either I drove to the Shady Grove Station or my wife dropped me off (“Kiss Ride,” as the sign said), but on days when my commute did involve riding the bus to or from the station, I could vouch for the truth of Patrick’s observation.

Often, I was the only white person on the bus, but if there was another white person on the bus, he usually had the unmistakable look of Got My License Suspended After My Third DUI. Bus-riding was a shameful necessity, a socially stigmatized lower-class phenomenon and, once I perceived this, the fact that I was on the bus—because we only had one car, and my wife couldn’t pick me up that evening for whatever reason—felt like a sort of humiliation: The Downscale Ghetto Cracker.

If bus-riding had such sociological implications in leafy green suburban Gaithersburg, what must be the situation in Queens, N.Y.?

This is the incident described by Paul Kersey, above.

Here are some of our previous reports on the dangers of white people riding public transportation:

Here‘s a quote from the one from Portland:

Showing proper progressive attitudes, no charges were filed by the victim’s family and both the father and his daughter deny any racial motive in the beating.

“People have taken a grain of sand and tried to turn it into a 200-pound boulder,” said Barry Buckland in regard to the gang beating of his own daughter.

Mr. Buckland still encourages young Karley to continue taking public transportation. It is unknown whether he is a candidate for Portland’s “Father of the Year” award.

So if you‘re visiting an American big city and thinking of using public transportation, I would suggest Uber or a rental car would be better.