Two Arrested In Mike Brown Inspired Beating... But It Won't Stop The Course Of Empire 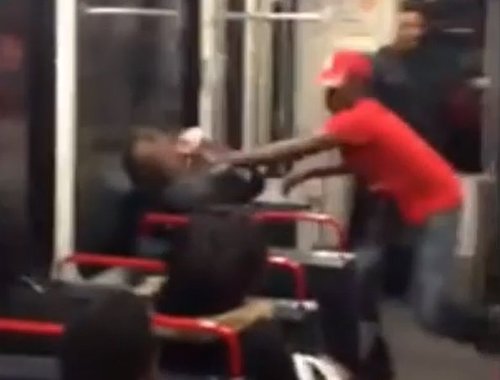 Hands up, watch the left hook

Now that the video of the beating has gone viral, the police were spurred into action and two suspects have been arrested in the beating of a white man who was attacked after he said he didn't want to talk about Michael Brown.

Two suspects have been taken into custody in connection with the beating of a man on a metrolink train on March 23rd.

Police say a 15 year old juvenile and a 21 year old man have been arrested and warrants will be applied for at the Circuit Attorney’s Office Tuesday. [Two arrested in in Metrolink Beating Case, CBS St. Louis, March 30, 2015]

Meanwhile, the victim is one David Autry, who has started a GoFundMe page to buy new glasses, gather charity for other crime victims, and buy new transportation for himself so he never has to take public transportation again.

An overreaction? Perhaps, were it not for this chilling account of his beating.

In an interview with KMOV 4, Autry called the reaction of the other passengers on the train “disgusting” and claimed witnesses were “laughing and smiling about it, [but] no one offered to help, no one attempted to call 911."

But Colin Flaherty, author of “White Girl Bleed A Lot: The Return of Racial Violence to America and How the Media Ignore it,” claims racially motivated attacks on whites are now common in cities across America...

“A huge number of people wonder how anyone could enter such a high risk area – such as any public transportation system – without some kind of plan for self-defense, whether it’s a gun, or a knife, or mace.”

Even Williams conceded there was a nationwide increase in “random acts of violence on public transportation.”

Autry encountered similar questions on his GoFundMe page about why he didn’t fight back. He responded, “I have to say I am amazing at how bold people can be behind the curtain of the Internet. I have been called just about everything for not standing up and fighting those guys.”

He explained, “First, I was dazed from the sucker punch in the face. Second, c’mon three against one? I was trying to protect my glasses. I didn’t know they were on the floor all bent up and the lens popped out. Third, if I had stood up and fought, only white guy on that train car, how do I know I wouldn’t be attacked from behind as well? It[']s easy to say what YOU would have done until you find yourself in that situation.”

Just so. Autry will probably be forced to apologize or issue a pro forma denial of racism for uttering the forbidden truth that a lone white person on a bus full of blacks might as well be walking around with a target on his back.

The conservative African-American activist the Rev. Jesse Lee Peterson suggests, "These attacks are not going to stop until whites speak up and start defending themselves...American cities have become a hostile environment for whites.”

The reason they will stay that way is the Multicultural Cycle of Destruction, represented here by the Course of Empire.

If whites started "speaking up," they'd be hounded by the media until they were fired by their jobs. And if they started "defending themselves," they'd be charged with Civil Rights violations.

So they do the reasonable thing and move away from diversity to new territory.

Slowly, they start to rebuild what they left behind.

Eventually, they build prosperous communities and a strong civic ethic.

Then the federal government notices these safe communities and moves in residents with Section 8 housing to break them up. The town is called racist for wanting to keep the community the way it is. Crime increases and the police respond, leading to charges of racism. Then the media and the well funded "nonprofits" of the Parasitic Class attack and smear the town as racist. Property values plummet and those who can afford it leave.

Those who leave are called racist for abandoning the town.

Those who stay (or are forced to stay because they are tied to their now worthless homes) are called racist for continuing to participate in government or law enforcement.

And so it goes.