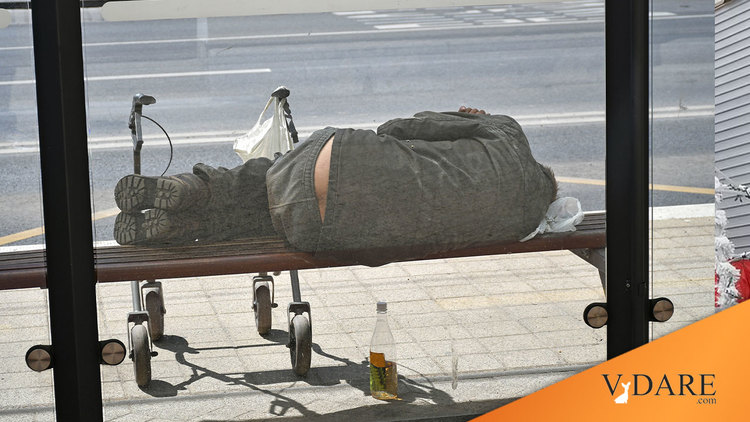 What The War On Law & Order Is Doing To Buses

As we’ve been told over and over by the important people, you need to stop driving your own car and take public transportation to fight Climate Change. On the other hand, the important people feel entitled to promote policies and manias that help make taking the bus a nightmare. A Washington Post reporter follows a lady bus driver in Denver around:

Anger and heartbreak on Bus No. 15

As American cities struggle to recover from the pandemic, Denver’s problems spill over onto its buses

… “Happy Friday,” she said to the next people in line, including a couple with three plastic garbage bags of belongings and a large, unleashed dog. “Service pet,” one of the owners said. He fished into his pocket and pulled out a bus pass as the dog jumped onto the dashboard, grabbed a box of Kleenex, and began shredding tissues on the floor.

“Service animal?” Suna asked. “Are you sure?”

“What’d I tell you already?” the passenger said. “Just drive the damn bus.”

… The Denver she encountered each day on the bus had been transformed by a new wave of epidemics overwhelming major cities across the country. Homelessness in Denver was up by as much as 50 percent since the beginning of the pandemic. Violent crime had increased by 17 percent, murders had gone up 47 percent, some types of property crime had nearly doubled, and seizures of fentanyl and methamphetamine had quadrupled in the past year.

… In the past two years, Denver-area bus drivers had reported being assaulted by their passengers more than 145 times. Suna had been spit on, hit with a toolbox, threatened with a knife, pushed in the back while driving and chased into a restroom during her break. Her windshield had been shattered with rocks or glass bottles three times. After the most recent incident, she’d written to a supervisor that “this job now is like being a human stress ball.” …

Now she stopped to pick up four construction workers in front of “Sunrise Chinese Restaurant — $1.89 a Scoop.” She pulled over near a high school for a teenager, who walked onto the bus as she continued to smoke.

“Not on here,” Suna said. The girl tossed the joint onto the sidewalk and banged her fist into the first row of seats, but Suna ignored her.

“Sir?” she said, tapping his shoulder. He had an open wound on his ankle, and his leg was shaking. “Sir, are you okay?”

He opened his eyes. He coughed, spit on the floor, and looked around the empty bus. “We make it to Tulsa?” he asked.

The passenger stumbled onto his feet. “Do you want me to call you an ambulance?” Suna asked, but he shook his head and started limping toward the doors.

“Okay. Have a good day,” Suna said. He held up his middle finger and walked off the bus.

… Two years later, ridership across the city was still down by almost half, and a new wave of problems had arrived in the emptiness of urban centers and public transit systems, not just in Denver but all across the country.

… There was Havana Street, where, a few months earlier, a woman in mental distress had shattered the windshields of two No. 15 buses, including Suna’s, within five minutes; and Billings Street, where, in the summer of 2021, a mentally unstable passenger tried to punch a crying toddler, only to be tackled and then shot in the chest by the toddler’s father; and Dayton Street, where Suna had once asked a man in a red bikini to stop smoking fentanyl, and he’d shouted “Here’s your covid, bitch!” before spitting in her face; and Downing, where another No. 15 driver had been stabbed nearby with a three-inch blade; and Broadway, where, on Thanksgiving, Suna had picked up a homeless man who swallowed a handful of pills, urinated on the bus, and asked her to call an ambulance, explaining that he’d poisoned himself so he could spend the holiday in a hospital with warm meals and a bed.

Public transit needs public order, but enforcing laws is out of fashion.