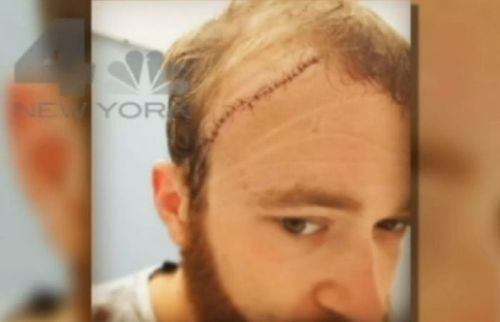 A Legal Professional Wonders Why Unprovoked Attacks Are Coming From Undescribed Attackers?

Re: A Legal Professional Asks Why Black-On-White Murders Are Called “Random”

Yet another "completely random" attack. All hail, Entropy!

I find it amazing that they could provide multiple photos of the victim, both before and after the attack, yet no photos, let alone a description of the attacker, despite having a record of 18 prior arrests, so there is no shortage of mug shots...['Suddenly All Hell Breaks Loose': Subway Rider Gets 28 Stitches After Stranger Attacks Him With Box Cutter, By Michael George, NBCNewYork, November 4, 2015]

But allow me to ask you, dear reader: do we really need to see a photo of Mr. Stanley Gary to confirm what we instinctively know? That this undescribed, raceless man who made an "unprovoked" stabbing attack on two whites is black?

And we all know that the motivation was merely his mental derangement, heaven forbid that a person of color might be driven by "hate."

James Fulford writes:  I don't think NY mugshots are available online, but I did find a man with a similar name to the accused in the public records of the NYPD, who was 6 foot tall, 180, black and the same age as this raceless attacker. The main point is that if a Hispanic gets beaten up anywhere, it's supposed to be Trump's fault, but none of this black-on-white crime can ever be the President's fault.