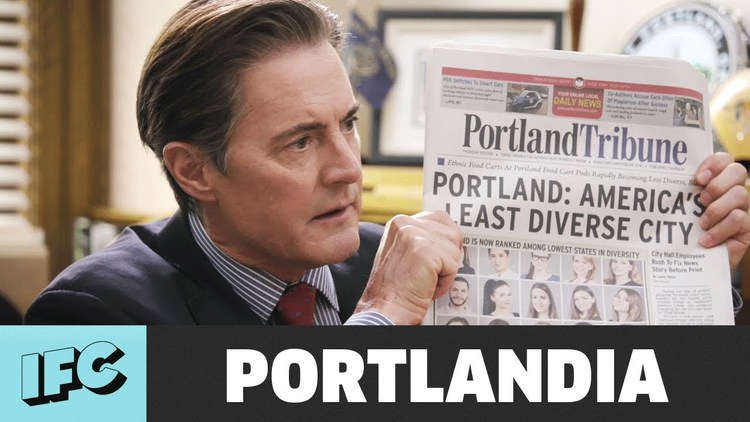 Portland, Oregon is a progressive city full of bike riders, outdoor enthusiasts, microbreweries, coffee shops, indie bands and book shops. It is always rated as one of the most livable and most green cities in the U.S. and Forbes has ranked Portland as the third safest city in the nation.

The city is even the subject of a popular TV show called Portlandia that makes fun of the Stuff White People Like types who inhabit “The City of Roses.”

But the unemployment rate in Portland is actually higher than the U.S. average. And salaries in other liberal Northwest meccas such as Seattle and San Francisco are roughly 20% higher than in Portland. So why are whites flocking there?

Answer: overwhelmingly, culture and quality of life. The progressive reputation of Portland is attracting college-educated whites from across the U.S. to live in a city full of reliable public transportation and walkable, safe neighborhoods.

But much to their consternation, their own migration is helping to keep Portland white.

The 2010 Census shows that whites comprise 74% of the city of Portland residents and 78% of the Metropolitan Area. A survey of the 40 largest cities in the U.S. concluded that Portland's urban core is the "whitest big city in the nation.” Black author Ernest J. Wilson III, [Email him]dean of the Annenberg School for Communication & Journalism at the University of Southern California, calls Portland, “one of the last Caucasian bastions of the United States.”

This fact seems to embarrass the nice white residents of Portland who are—at least publicly—committed champions of racial diversity.

Dina DiNucci works in a Portland coffee shop and brags about living in one of the most diverse parts of the city, “We are not just a white America anymore,” she says. “It is changing all around us." Nichole Maher heads something called the Coalition of Communities of Color that gets $330,000 in taxpayer money to tell white Portlanders how racist they are. “We trick ourselves and say, ‘We’re such a white city, we don’t have to talk about race and these issues.’ It allows us to keep acting like everyone is white and no one feels responsibility to challenge the role of race here.”.” [In a changing world, Portland remains overwhelmingly white, By Betsy Hammond, The Oregonian, January 17, 2009]

However, if it’s any consolation to these ladies, Portland is not completely lacking in the multicultural enrichment enjoyed by less progressive whites who reside in more diverse locales. Blacks comprise only 7.8 percent of Portland (and a mere 3 percent of the Portland metro area). But they are making their presence felt in the city.

Showing proper progressive attitudes, no charges were filed by the victim’s family and both the father and his daughter deny any racial motive in the beating.

“People have taken a grain of sand and tried to turn it into a 200-pound boulder,” said Barry Buckland in regard to the gang beating of his own daughter.

Mr. Buckland still encourages young Karley to continue taking public transportation. It is unknown whether he is a candidate for Portland’s “Father of the Year” award.

Oregonian columnist Joseph Rose [email him], who elicited Buckland’s comment above, was more upset about the fact that some whites thought Karley might be a victim of black racism than he was about the beating:

Karley is white. Her attackers are black. For many people hiding under the hood of anonymity on talk radio and in online forums, that's all the evidence they needed to unload: Hate crime! Racist attack! Proof of "black hate" and "black racism"!

Stop. The reality, investigators say, is that the flogging started after Karley and her attackers had a "verbal dispute" on the train. Karley made it clear that she didn't appreciate the girls' loud, distasteful remarks about a boy riding with her. They, in turn, didn't like that she had the mettle to stand up for her friend. So, the thugs advanced.

Yes, Karley told me, one of the strangers referred to her as "white girl." But it was an encounter of a hundred insults. The girls were drunk on their own spit. These are the things bullies say.

MAX beating was ugly, but the reaction by some has been just as bad, By Joseph Rose, The Oregonian, January 13, 2012,

And then, a couple of weeks later:

The boy was wearing headphones but noticed that a man in a car had said something to him. When he took off his headphones and asked the man what he said the black suddenly punched him and then kicked him in the head while he was down. The boy suffered a concussion and was treated at a local hospital. [Teen recalls sudden, violent attack in North Portland, [Video] By KATU News, Jan 12, 2012 ]

“I know it’s random and I know whoever did this, he’s got some issues that he needs to deal with,” was about all the mother could say about the black who attacked her son unprovoked.

And a few days after that:

Van Wormer suffered bruises on her arms, face and head. 'He just kept screaming 'Mommy, I don’t want you to die’'

Of course, these race attacks happen every day in the brave new diverse Americaland outside of Portland too. In the same time period:

But Philadelphia and Ocala are not Whitopias like Portland. All but the most hopelessly naïve whites in these cities—and for that matter other non-blacks—realize there is a strong possibility they will be victimized by black crime and violence, especially when riding public transportation.

Some may think it a bit of poetic justice that SWPL whites in Portland—who are quick to lecture other whites about proper racial etiquette—are now experiencing the diversity they demand for everyone else.

The Portland race attacks show that even Whitopias are not immune from America’s emerging racial reality.

But, even though all these attacks involved young white children, still their own SWPL parents don’t get the message.

How long will it take? Forever, if The Oregonian's Rose has anything to do with it.