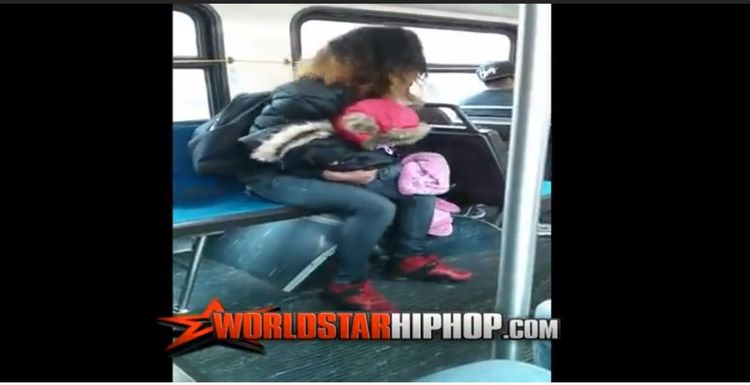 The celebrated Hart-Risley Hypothesis that the school test score shortcomings of welfare children stem from their mothers not talking enough — welfare children are exposed to 32 million fewer words by age four, we are frequently informed — is back in the public eye with another video in the increasingly popular genre of Poor People on a Bus. As Hart-Risley advise, the mother does verbalize extensively, although those scholars might not fully approve of some of her vocalizations, such as "Somebody grab by m**********' baby." This request to the other transit passengers is intended to allow the mother to make good on her promise to another woman on the bus that "I will thrash you ... for disrespecting me in front of my baby."

Since nobody steps forward to grab her incest-inclined infant from her, at about 1:40 in the video the mother deftly executes a 1970s U. of Oklahoma Sooners wishbone-style pitchout to the surprised lady across the aisle, who, fortunately — unlike star-crossed Heisman-winner Billy Sims in so many goal-to-go situations — doesn't fumble.

A number of commenters have wondered why nobody on the bus suggests to the mother than her implementation of the Hart - Risley protocol that welfare mothers should talk more is lacking in a full, nuanced understanding of how best to foster her baby's cognitive development But, the other passengers had probably watched on World Star Hip Hop what had happened to Lefenus Pickett on a Philadelphia bus when he had critiqued a welfare mother's childrearing techniques.

Seriously, the increasing intensity of political correctness in the Serious Media probably has something to do with the spread in the Undernews of cellphone and security camera videos on sites like World Star Hip Hop.

Moreover, the growing conventional wisdom — that society must, in effect, take poor children away from their blood relations for as many of their waking hours as possible — may well be secretly motivated by these kind of videos as well.