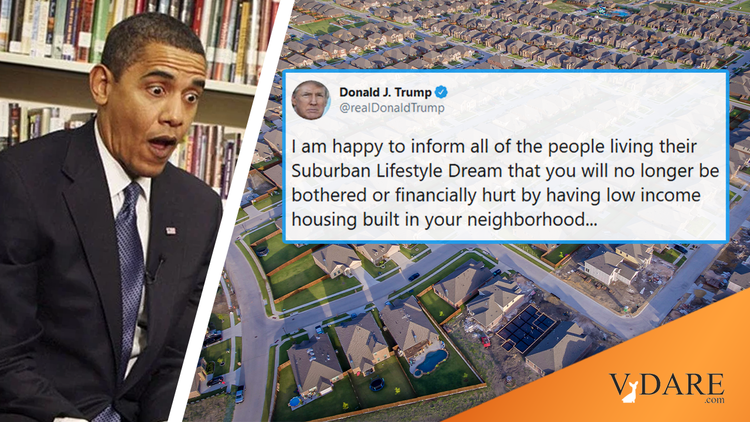 Earlier: Biden Vows To Rip Out Roots Of Systemic Racism, i.e. Seize The Equity In Your Home

On the 4th of July, when Trump was making a patriotic speech at Mount Rushmore, Democratic Presidential candidate Joe Biden was attacking white people in a speech about "systemic racism", which is racism that you don't have to do anything bad for it to happen, you just have to be white.

“systemic racism from every area of society it infects — from unfairly administered COVID-19 recovery funds, to laws that perpetuate racial wealth gaps, to health disparities, to housing policy, to policing, to our justice system and everywhere in between.”

Steve Sailer described it this way:

The Democrats demand equity… the equity you’ve built in your home, to be precise.

The current President, on the other hand, who has spent all his life in the real estate business, realizes how important the equity in your home is, and wants you to keep it:

This is apparently terrifying to the Dem/MSM collective, because it might result in the reelection of the President.

They're featuring two basic reactions: Biden doesn't threaten the suburbs, and in the alternative, if he does, it's wrong for the President to defend them:

An example, from Esquire Magazine:

Expect to see more lying on the subject.

Here's part of a thread I Tweeted earlier:

Obama's Affirmatively Furthering program might have been one of the factors that cost Hillary the election: https://t.co/9L0eIomh12