NPR On Real Estate: Information Is Racist, Ignorance Is Woke

…It's well known in the real estate industry that highly rated schools translate into higher housing values. Several studies confirm this and even put a dollar figure on it: an average premium of $50 a square foot, in a 2013 national study.

In Chappaqua, N.Y., an affluent bedroom community for New York City, the town supervisor recently went so far as to declare that, "The schools are our biggest industry — whether you have kids in the school or not, that's what maintains our property values."

But some advocates for fair housing see a potential problem with the close ties between school ratings and real estate. They say the common denominator, too often, is race. And they argue that the problem has intensified in the last decade with new web platforms bringing all kinds of information directly to homebuyers.

That, in turn, raises some complicated questions about how factors like test scores and school ratings are used to influence homebuying decisions.

Characteristics like safety and parent involvement — the qualities Monique and Jonny say they value in a school— can be hard to quantify. Most states base their school ratings primarily on more easily measured factors, like standardized test scores and graduation rates. And these indicators, in turn, are heavily influenced by inequities of race and class.

There's a large, persistent and well-documented gap in test scores between black and Hispanic students and their white and Asian peers. There are many reasons for these disparities: income and wealth gaps, disciplinary policies that "push out" black students from school systems, less experienced teachers, the early-learning gap between high- and low-income children. But they all end up reflected in one number: a school rating.

“A lot of time, with schools that serve majorities of students of color, you get a negative rating because the test scores are low,” says Genevieve Siegel-Hawley, an assistant professor who studies race and housing at Virginia Commonwealth University. But, she says, “most of the variation in test scores is explained by the kids’ own poverty or the poverty of their school.”

It’s a virtuous cycle for a town like Chappaqua, but a vicious cycle elsewhere.

Isn’t there some couple in the news a lot lately who chose, out of all the places in America, to buy a house (or, now, two) in Chappaqua? Perhaps one of the hundreds of reporters who follow the lady of the household around could ask her why she was so racist as to choose Chappaqua?

In fact, hasn’t Chappaqua been targeted by the Obama Administration’s program to move blacks out of the horrible slums with no jobs or mass transit, like Brooklyn, and into the distant suburbs? I gather from Obama Administration press releases that Chappaqua exemplifies white suburban racist resistance to Affirmatively Furthering Fair Housing. It would seem like an interesting topic for the world’s most famous Chappaquans to be asked about.

For a realtor, directly discussing the racial composition of a neighborhood with homebuyers is against the law. …

“A striking pattern regarding schools emerged from these sales tests,” the report states. “Instead of making blatant comments about the racial composition of neighborhoods, many real estate agents told whites to avoid certain areas because of the schools. It is evident from the investigation that schools have become a proxy for the racial or ethnic composition of neighborhoods.”

For example, white testers reported that they were told to avoid the Tarrytown, N.Y., schools, which are predominately Hispanic. In several cases, the report says, agents there told whites that the schools were “bad,” but Latinos were told that the same schools were “good.”

That couple who moved to Chappaqua, they could be asked why they were so racist as to not move to Tarrytown …

They’d probably reply that they were totally ignorant of the data, because online information is all part of Putin’s plot to destroy America.

In Philadelphia, an agent told a white tester that the schools in a particular town were very good, then added, “But don’t tell anyone I told you that.”

Williams says comments about schools have been included as part of the evidence in at least one case that resulted in a finding of discrimination.

He points out that the National Association of Realtors advises its members not to air their opinions about schools, and to instead direct clients to objective sources of information.

Current fair housing laws govern advertising and statements made by landlords and real estate agents. But in the last decade, the web has brought the process of house hunting closer to consumers. And this brings a new dimension to the connection between racial housing patterns and school ratings.

Realty search engines like Zillow, Homes.com and Redfin link to local school ratings prominently on every listing. The actual racial and ethnic composition of each school is a click or two away. On all three sites these ratings are color-coded: green, yellow or red.

Siegel-Hawley of VCU started using Zillow when she and her husband were looking for a “dream house” in Richmond, Va. She quickly took note of the color-coded school ratings and said they reminded her of redlining, which was a legalized and explicit practice of discrimination supported by the Federal Housing Administration between 1934 and 1968. 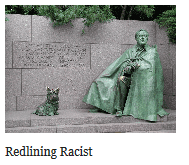 How long until FDR gets the Woodrow Wilson treatment for his redlining? I can foresee Ta-Nehisi Coates, future winner of the Nobel Prizes for Literature, Peace, and Physics (for his research into Black Bodies), someday leading a ceremonial tipping over of FDR’s bronze wheelchair sculpture on the National Mall.

… Michael P. Seng, a professor of fair housing law at John Marshall Law School in Chicago, isn’t so sure. Providing school ratings oversteps the bounds of what a real estate service should be doing, he says.

But to bring an actual court case, he explains, a plaintiff would need to prove that the school ratings steer people out of communities on the basis of race. “It would take a lot of statistical studies, but I think it’s possible,” he says.

… “If a realtor was to hand somebody Census stats showing the race and ethnicity of the neighborhood, it would probably be an FHA violation.”

The question that has yet to be settled, says Williams, is: “Does providing this information to consumers, in a format that would allow for discrimination, constitute discrimination?”

No, says Fred Underwood, director of diversity at the National Association of Realtors. “I’m not certain that any of this rises to the level where it would be a court case.” On the other hand, he acknowledges, “If you’re consistently undervaluing certain communities and overvaluing others, and there’s a racial correlation, then there might be a problem.”