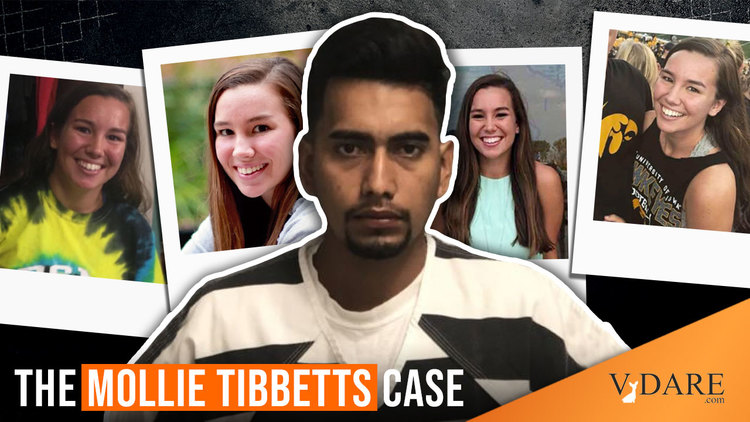 The Murder Of Mollie Tibbetts: A Perfect Storm

Earlier: Mollie Tibbetts's Killer Got The Change Of Venue White Men Can't Get, Is Convicted Anyway

There are 22 mentions of the murder of Mollie Tibbetts on VDARE.com.  It happened in 2018, but it's a perfect illustration of the kind of typical Latino crime that caused then-Candidate Donald Trump to say, when announcing for President and promising to fight illegal immigration.

Both Mexico and Central America are much more rapey than the United States, and almost everywhere in the US is more rapey than Iowa, but some people in Iowa's farm country have decided they need cheap labor...so Mollie Tibbetts died.

In  2018, she just vanished while jogging, and was missing for weeks:

The Mollie Tibbetts case has been fascinating the media for weeks. She is a young girl who went missing in Iowa, seemingly without a trace. The FBI, the Iowa Division of Criminal Investigation and other law enforcement bodies have all been searching for her. There was even a fund of $400,000 established for her return.

It appears the mystery may have been solved. A man has been charged in the murder of Tibbetts—and it is an illegal immigrant....

Illegal immigrant, 24, charged with murdering Mollie Tibbetts after he admits chasing her down, ‘blacking out and attacking her; then dumping her body in a cornfield, by Jennifer Smith, Hannah Parry, and Ben Ashford, Daily Mail, August 21, 2018

Steve Sailer reacted to the story below by titling his post: Mollie Tibbetts Case: Finally, a Becky Gets What's Coming to Her for Threatening to Call the Cops on a PoC

Officials pulled him in for questioning Monday where he admitted “making contact with a female running in Brooklyn [Iowa, not NY]” and that he pursued her to an area east of town in Poweshiek County, according to the criminal complaint.

He then told officials that he “got mad”

Steve: wrote: "And who wouldn’t, what with all the stories in the news lately about “BBQ Becky” and “Permit Patty” calling the authorities on PoCs?"

and panicked and blocked his memory, which happens when “he gets very upset,” according to the criminal complaint….

He then realized he had earpieces in his lap, which made him realize that Tibbetts was in the trunk …

Steve again: "Don’t you just hate it when you notice there’s a human being in your trunk and you can’t remember why? It’s like a scene from Memento or The Hangover."

Mollie Tibbett's father is some kind of anti-racist immigration enthusiast whose feelings were unaffected by his daugher being murdered by a Hispanic illegal.

'She was nobody's victim': Mollie Tibbetts' brave father delivers touching eulogy and even thanks the local Hispanic community, while her brother lauds the 20-year-old student for trying to fight off Mexican suspect accused of killing her, Daily Mail, August 27, 2018

This one reminds me of the reaction of Amy Biehl’s parents to the murder of their daughter by a black South African—which was to go all grovelly before the ethnic group that spawned her killer.

It makes me sick.  At some point, a healthy morality dictates that you feel anger, not just sadness.

"The Hispanic community are Iowans. They have the same values as Iowans," he said, including an emphasis on family. "As far as I'm concerned, they're Iowans with better food." Yeah. Well, they're not raping my daughers. https://t.co/1gESTDig8Y

The idea that Hispanic illegals have the same values as Iowans is crazy. Ellen Packer wrote here

Mollie Tibbetts’s Murderer NOT An Outlier: Homicide Rates In Mexico, Central America Among Highest On Planet

John Derbyshire called it A Perfect Storm In Iowa, and checked off "Ten Points About Mollie Tibbetts Murder ", all of which are included below:

The NYT, while fond of NOT reporting when an illegal immigrant kills someone, did a piece about women being harassed, and sometimes murdered while jogging, by men. See Steve Sailer's NYT: Here's How to Politicize the Murder of Mollie Tibbetts—"Running While Female".

When burglary suspect Ahmaud Arbery tried to grab a shotgun from one of the citizens who were trying to arrest him, and got killed, he was referred to in the pro-black suspect press, both liberal and cuckservative, as a "Jogger".

We pointed out that many white men and women had been beaten, raped, and even murdered when they went jogging near blacks and other minorities. Mollie Tibbetts was one of those. See Joe Biden Wants To Talk About Black “Jogger” Ahmaud Arbery—Why Won’t He Talk About These Raped/Murdered White Joggers?

There's a tributed to Mollie Tibbetts on FindAGrave.com, but no gravestone photo, since she was cremated, not buried.

Let her name not be forgotten.