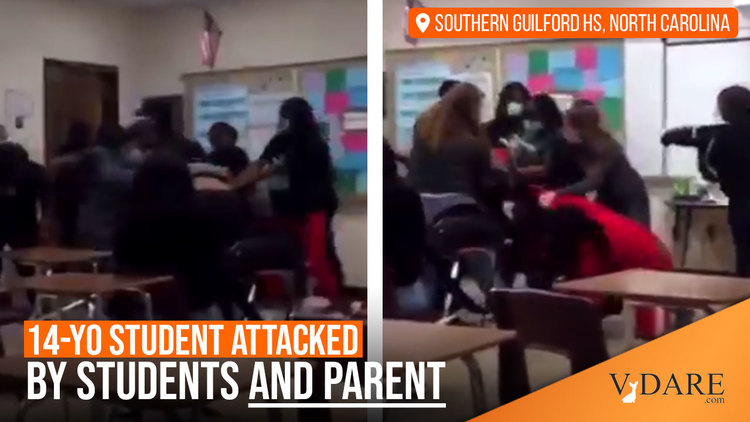 Another Black Exuberance Incident During The Racial Reckoning

Southern Guilford HS. A parent along w/other students from a diff school were able to walk into the school & assault a student. No OneCard is used? What happened to the $?@GCSchoolsNC pic.twitter.com/wyG2AShJ6n

Parents in the North Carolina city of Greensboro are outraged after authorities say six students and a mother entered a school to beat up a 14-year-old girl in her classroom.

No charges have been filed yet against the students, as well as the 37-year-old mother and a 18-year-old, who stormed into Southern Guilford High School on Tuesday, authorities told WGHP Fox 8. The identities of the victim and assailants were not disclosed by authorities.

Capt. Brian Hall, a school resource officer for the Guilford County Sheriff’s Office, told WRAL that school fights happen often, but that a parent being involved “kind of took it to whole ‘nother level.” …

The group attack is believed to be connected to another fight that happened at a bus stop on Monday, and a 16-year-old girl who attends the high school may have helped put the attack in motion, Hall told local stations.

That girl, who was involved in the Monday fight, assembled a group of others to retaliate against the 14-year-old student, Hall told WRAL.

She propped open a door at the high school to let in the others, who arrived in two separate cars, he told the news station. She then allegedly led them to an upstairs classroom to their target.

In a video posted on social media by Take Back Our Schools — GCS, a group of county residents concerned about for-profit groups and politics entering schools, a small crowd of people wearing face masks are seen gathering in a corner. One person punches the victim’s back while others pull her hair. …

The attacked teen girl didn’t suffer any major injuries but did endure cuts and bruises to her face, Hall told local outlets.

Some teachers and a school resource officer responded to the event but didn’t have time to prevent the attack, which reinforces the need for officers to be in school, Hall told WGHP Fox 8.

An important question is whether these kinds of Black Exuberance Incidents have gone up in the one year since the media declared the Racial Reckoning. But I can’t think of a trustworthy methodology for answering that question. One reason I tend to focus on homicide statistics is that dead bodies usually wind up in some bureaucratic list, while who knows how good of a job the authorities do at recording trends in other crimes.