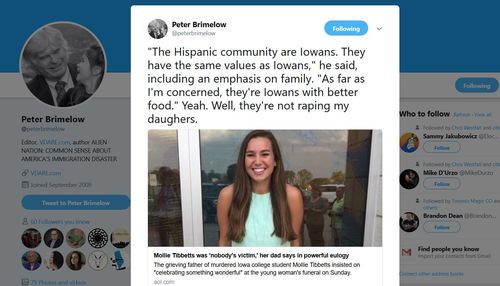 'She was nobody's victim': Mollie Tibbetts' brave father delivers touching eulogy and even thanks the local Hispanic community, while her brother lauds the 20-year-old student for trying to fight off Mexican suspect accused of killing her, Daily Mail, August 27, 2018

This one reminds me of the reaction of Amy Biehl’s parents to the murder of their daughter by a black South African—which was to go all grovelly before the ethnic group that spawned her killer.

It makes me sick.  At some point, a healthy morality dictates that you feel anger, not just sadness.

"The Hispanic community are Iowans. They have the same values as Iowans," he said, including an emphasis on family. "As far as I'm concerned, they're Iowans with better food." Yeah. Well, they're not raping my daughers. https://t.co/1gESTDig8Y

Anger about the higher propensities of blacks and Hispanics to kill—and refusal by anyone to acknowledge the fact.  Anger about a white-guilt immigration policy that set up cases like this.  Anger that “Iowan with better food” Christhian Rivera was hosted by an Iowa farming concern that should have known he wasn’t supposed to be here.

Instead, Tibbetts’ father is slobbering over Hispanics, telling them how sensitive and understanding they are.

Families of whites killed by nonwhites have lost their natural disgust, sapped not simply by promiscuous forgiveness but a twisted racial Stockholm syndrome in which they heap praise upon their captors.  Truly, the epitaph of the white race will read: At Least They Weren’t Racist’.