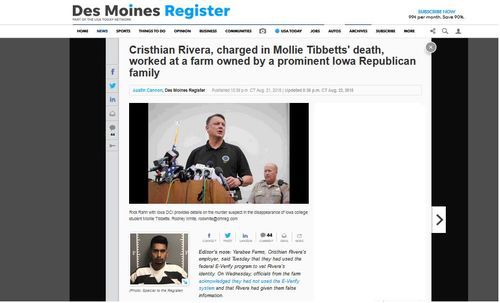 The murder of Mollie Tibbetts in Iowa is an unusually comprehensive story, in that it puts on display a remarkably large number of the components of our immigration-policy lunacy.

Ms Tibbetts, just to remind you, was a 20-year-old white girl, a sophomore at the University of Iowa, majoring in psychology. She went jogging on July 18th and was not seen alive again. Cristhian Bahena-Rivera, an illegal alien from Mexico, has been charged with her murder. A preliminary autopsy has indicated that Ms Tibbetts was stabbed to death.

Let me tick off those components for you.

I've probably missed a couple, but ten is a nice round number. Sufficient to say, from those ten points alone, that getting from where we currently are to a sane, strict immigration policy that benefits Americans, is going to be a long, hard climb.