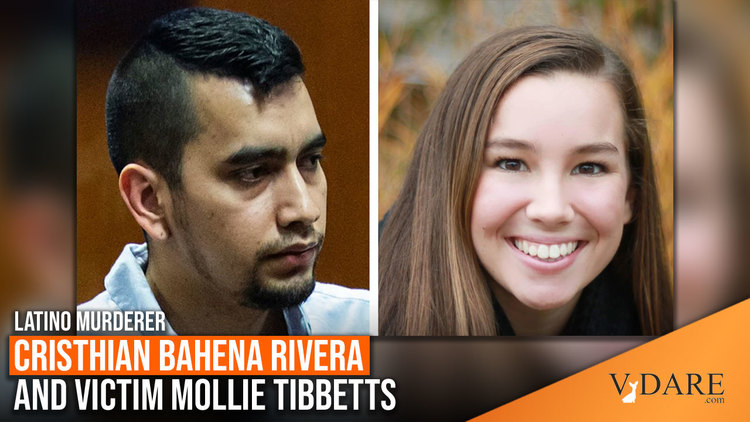 Mollie Tibbetts's Killer Got The Change Of Venue White Men Can't Get, Is Convicted Anyway

Mollie Tibbetts  was a young white girl murdered while jogging by an illegal alien called Cristhian Bahena-Rivera, who was just convicted of her murder.

The crime happened in 2018, and in March 2019, Bahena-Rivera's lawyers filed for a change of venue from the ironically named Montezuma, Iowa, for the specific reason that they wanted "a county with greater Latino representation in the jury pool." (There are probably plenty of his "peers" in the county where committed the murder, but Bahena-Rivera is an illegal alien who can't speak English, so none of his "peers"  can serve on a jury.)

Prosecutors agreed, probably because they were afraid that if they didn't, a  higher court would reverse a guilty version on grounds of racism.

He was convicted anyhow, in spite of trying to blame some imaginary white murderers he apparently made up, and his lawyers allowed him to testify to...in Spanish.

Cristhian Bahena Rivera claimed two armed, masked men broke into his home and ordered him to drive them to the cornfields, where one of them killed Mollie Tibbetts, then put her body in his trunk.

However, think of all the people who couldn't get a change of venue, probably because they were white, and nothing you do to a white guy is going to be considered racist by an appeals court.

Apparently receiving a change of venue to insure the appearance of fairness is a privilege reserved for non-white or non-citizen accused.