The story of Guatemalan illegal alien Gilmer Barrios is getting stranger. Your correspondent reported that he was deported by the Border Patrol and then readmitted by the Border Patrol—according to reports in the Lugen Presse and by Barrios’ Treason Bar attorney. New evidence has come to my attention from both the Lying Press and inside sources detailing an even stranger story.

First, and most important, Barrios was a beneficiary of the Obama Regime Administrative Amnesty, specifically, the Immigration Court Amnesty where illegal aliens in deportation proceedings have their cases closed by agreement between the alien and the government or ordered closed by a kritarch on his own action. Then the alien is allowed to remain in the United States illegally, many with no hope of ever legally adjusting status, though the real intent is to have them in the United States for the next amnesty legislation.

Your correspondent, because of the lies of omission and commission by the Lying Press, was incorrect on some conclusions, but correct on others. In general, what was confirmed was that the reporter for NBC/Telemundo, Damià Bonmatí, was deliberately obfuscating the issue, giving more detail in Spanish language stories, mixed with lies, and lies of omission and commission in English language stories.

First, the Spanish language version of the story translated by Google.

In the early hours of March 27, the Guatemalan Gilmer Barrios found himself in front of the border wall and in a row with seven other migrants who were being deported. This is how he remembers the exchange he had with the agents who were going to deport him:

– We are on the border of Tijuana and you are going to be deported.

– No, I cannot leave the country, I have my wife and I have two children. They cannot survive alone – he claims to have said.

After more than a decade in the United States, the deportation of the immigrant started a few days before a checkpoint (checkpoint) Border Patrol in California where he spent dozens of times in recent years. He assures that, in his expulsion, he did not see any immigration judge or any agent of the immigration service (ICE) as it happens in normal conditions. But, during the COVID-19 national emergency, the Border Patrol plays a new role.

[“They Pulled Me Hard”: The Border Patrol Uses Its Special Powers During The Coronavirus Emergency To Deport A Guatemalan To Mexico, by Damia Bonmati, Noticias Telemundo, April 11, 2020]

Ignore the above lies that are implied as quotations, but not put in quotation marks. Those fake quotes are not true. Illegal aliens, like other criminals, always lie about how they came to be arrested and how they were treated upon arrest. They always claim they were threatened or tortured, or beaten or assaulted, or abused in some manner as a prelude to their shameless baby-waving.

“I have been on this route for four years and nothing has ever happened to me. I even said goodbye to them when I was there, “Barrios explained to Telemundo News. But that Monday the process was complicated after asking for identification.

“They pulled me hard, they put me on top of the car, they put handcuffs on me, they swore at me, they tightened my grip and they told me that I was going to be deported,” said the Guatemalan immigrant. He says Border Patrol agents denied a call to his wife, and removed her shirt and shoes.

And then more lies and the sad evidence that he was a beneficiary of the Obama Regime Administrative Amnesty, immigration court version. They would have only pulled him hard if he was resisting arrest. And note his arrogance, he is in the United States illegally and he is proud he fooled the Border Patrol Agents at the San Clemente Checkpoint for years.

After more than a decade in the United States, Barrios’ legal situation is ambiguous: his work permit has expired, his immigration case is administratively closed, and he was trying to regularize his situation in the country. His wife and two children, age 2 and 1, are U.S. citizens.

"Gilmer does not have a deportation order. The immigration court is the one with the authority to determine if Mr. (Barrios) had to leave the country,” said the Guatemalan legal representative, Emilio Amaya.

A document reviewed by Noticias Telemundo shows how immigration judge William David Neumeister of Los Angeles administratively closed the case in November 2016. The automatic immigration court system also contains no deportation order under his alien number. Gilmer, who is his name, appears as ‘Gilmar’ in the documentation of the immigration court. 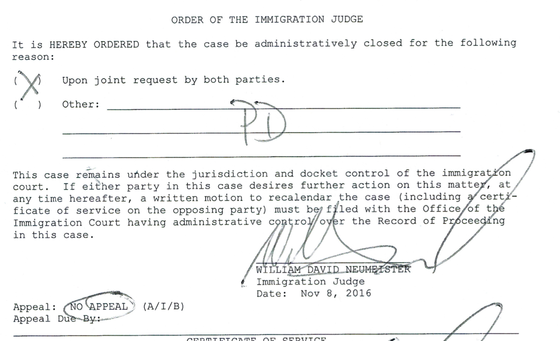 There we have it, On November 8, 2016, just days after Donald J. Trump’s election victory, the Obama Regime is in a mad race to hand out more immigration court amnesties. It may be that Barrios was one of the last beneficiaries of the Immigration Court Amnesty. His legal situation is not ambiguous. Barrios is an illegal alien. The Obama Immigration Court Amnesty did not give him any legal status, nor did his marriage to an American citizen.

However, this does tell us something. Barrios has been in the United States over 10 years illegally. We know that at some point he was arrested and placed in removal proceedings and that those proceedings were closed just before Donald Trump became President, and ended the Immigration Court Amnesty. In fact, the Trump Administration has started to reopen cases like Barrios’ aimed at deporting those who won the Obama Regime Administrative Amnesty.

What we know now is that Barrios, 10 years ago, was arrested and placed in removal proceedings. We know that he applied for and received employment authorization. We know that employment authorization is expired. It expired, as least as of the day the immigration court closed his case, as he had applied for asylum when first arrested and subsequently was granted employment authorization. This is a long-standing scam by illegal aliens; they make a fraudulent claim of asylum, then after 6 months, can apply for employment authorization, then never appear for their asylum hearings or drop those claims as Barrios did. Since then, Barrios has gotten married to a U.S. citizen. Generally, he would be able to adjust status in the United States based on that, if he had entered the U.S. by inspection and admission, and just overstayed his period of admission. Note that those who enter without inspection may not adjust their status in the United States, so Barrios clearly entered illegally, was either arrested and claimed asylum, or claimed asylum while in the United States illegally, was denied, and then was placed in removal proceedings.

Now, Barrios is claiming that he was trying to “regularize” his situation. What we learn is that since he has not been able to adjust status based on his marriage, he had entered the United States without inspection and cannot adjust status here. So, there is nothing he can do to “regularize” his situation except by a successful asylum application, which we know he cannot do, as he made a claim for asylum in the immigration courts when he was placed in removal proceedings. If he had a strong case for asylum, he would not have agreed to an administrative closure of his case in immigration court. So, that is more lies from him, his Treason Bar attorney, and the reporter. Note that the reporter from the Lying Press made no effort to question either Barrios or his attorneys, there are two, one male in the story, and one female who was representing him in his case before the immigration courts in 2016. Why, because the reporter has an agenda, his agenda is mass immigration and the replacement of the historic American nation with Third World illegals.

Now, for the inside scoop. Barrios was arrested by the Border Patrol. He was not assaulted. He was given opportunity to call his wife, friends, and his first attorney who represented him in 2016. No attorney has filed anything for him since 2016, so he is not trying to “regularize” himself. He was served with a Notice To Appear (NTA), Form I-862, by the Border Patrol and placed in ICE custody. He also claimed fear of being returned to Guatemala, so he perhaps was returned to Mexico by ICE ERO based on the new asylum protocols which mean Wait In Mexico.

Apparently it was ICE ERO that removed him from the United States to Mexico, quite likely under the special China Flu provisions of law that allow illegal aliens arrested in the border area to be removed without review. So, Barrios and his attorney are lying. Barrios was removed by ICE ERO to Mexico, as it is policy now during the China Pandemic for illegal aliens encountered in the border area, and specifically when encountered at interior checkpoints within 25 miles of the border, to be removed immediately to Mexico regardless of citizenship.

All illegal aliens are presumed to have recently entered illegally when encountered in the border area, even if they are long-time illegal aliens, such as Barrios. Note also that the special authority to prohibit the entry of aliens is not limited by the amount of time an alien has been in the United States. This means that whether an illegal alien had just crossed the border, was here two days, or two years, or ten years, if arrested, that illegal alien can be removed expeditiously.

Note that your correspondent had concluded, based on Barrios’ lies, that he was removed by the Border Patrol, that he was subject to Expedited Removal (ER). That may not be correct, as my sources say that Barrios was placed in ICE custody. We don’t at this time know for certain if ICE used ER or the Wuhan Flu authority. However we do know that it was U.S. Immigration and Customs Enforcement Enforcement and Removal Operations (ICE ERO) that allowed Barrios back in the United States.

Thankfully at the time of this writing, he is in custody. However, he should be immediately deported, as we know he failed on his initial asylum claim, as he failed to pursue it and instead accepted the Obama Regime Administrative Immigration Court Amnesty, which left him in the United States as an illegal alien without employment authorization. Note, his employer should be prosecuted for illegally employing him as his employment authorization was expired, and likely many other illegal aliens, as Barrios was working for a landscaping company.

But now the question is what will happen to this long-time illegal alien. Ken The Knife Cuccinelli should make certain two things. First, that whoever authorized Barrios’ return to the United States should be fired and that the full weight of the ICE Office of the Principal Legal Advisor, ICE’s attorneys who prosecute immigration cases in the immigration courts, should fight this case to the end. Let Ken The Knife know that he should not fold under pressure from the Lying Press and the Treason Bar.

Regarding all this nonsense, you can inquire with ICE ERO Field Office Director Gregory Archambeault about what happened. Ask him what was the legal basis to bring Barrios back to the United States. The principle of immigration law is once the alien has left, there is no bringing him back except with a visa, parole, or a waiver. He can be reached here and at (619) 436-0410.