Impeach Judges For Interfering With Immigration Enforcement—Abolish the EOIR! The Case Keeps Strengthening

Once again, our imperial judiciary is claiming the right to make immigration policy. The Supreme Court subverted President Donald Trump’s authority on immigration earlier this week by preserving a lower court ruling that exempted grandparents and other relatives from Trump’s travel ban . [Supreme Court says grandparents, relatives can enter US despite travel ban, by Ariane de Vogue, CNN, July 19, 2017]The administration did score a win when the Supreme Court reversed another part of the lower court ruling, allowing refugee ban enforcement [Justices allow strict refugee ban but say grandparents OK, by Mark Sherman, AP, July 19, 2017]. But eventually Trump and the GOP Congress must act to reclaim immigration policy from these would-be “kritarchs”—who increasingly act as if they are the only meaningful branch of government.

My answer: impeachment. And reestablish control over the immigration bureaucracy by abolishing the Executive Office for Immigration Review (EOIR).

It is unquestionable the Constitution grants authority over immigration policy to Congress. Article I, Section 8, Clause 4 of the Constitution gives authority over immigration to Congress via legislation. No judge may challenge this authority. To do so is usurpation of the powers of another branch of government. Furthermore, Congress has specifically stated in legislation, specifically Title 8 United States Code, Section 1252, Judicial Review, that judges may not review findings of the Executive Branch in the removability of an alien.

Nevertheless, District Judge Derrick Watson of Hawaii, who previously issued a stay on the Trump travel ban based explicitly on his personal political beliefs, took it upon himself to simply assert that refugees working with a resettlement agency—the notorious “refugee contractors”—should be allowed into the country, and dramatically expanded the definition of family members who should allowed in. [Trump Travel Ban: Judge Expands Definition Of 'Close Relative,' BBC, July 14, 2017]

The Supreme Court’s restoration of refugees restriction is in line with the Constitution, but its approval of Watson’s expansion of the “family member” category is judge-made law, essentially allowing all refugees who can create any kind of tenuous connection with someone already here to enter the country. [Supreme Court allows Trump refugee ban but backs broader exemptions for relatives, by Robert Barnes, Washington Post, July 19, 2017] 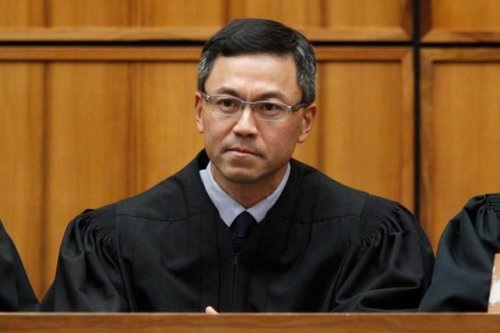 And Kritarch Watson is not alone in declaring his right to decree immigration policy unilaterally.

In a case earlier this month, United States District Judge Mark Goldsmith (an Obama appointee) bluntly declared his fuzzy feelings about Iraqis overruled the Constitution itself and halted the deportation of hundreds of illegal immigrants from Iraq.

In a case resounding with major implications for big separation-of-powers questions, District Judge Mark A. Goldsmith said federal courts have the power to provide a final appeal in immigration cases, even though Congress had tried to limit their powers and give the executive branch full control of deportations.

Judge Goldsmith overruled Congress and said he had to step in to save the Iraqis from immediate deportation, saying otherwise they risked “death, torture or other grave persecution” back home.

“Under the law, the federal district courts are generally the ‘first responders’ when rights guaranteed by the Constitution require protection,” the judge wrote. “In fulfillment of that mission, this Court concludes that it has jurisdiction in this case to preserve the fundamental right of habeas corpus and the duty to do so.”

But this case has nothing to do with habeas corpus, only with the authority of Congress to regulate immigration. What Kritarch Goldsmith did was seize power from Congress in a judicial coup d'etat.

Furthermore, such assaults on immigration enforcement are not limited to real judges. The quasi-judges of the Executive Office For Immigration Review (EOIR) are also implementing a stealth amnesty.

This Open Borders propaganda from The Baltimore Sun is the sob story of two illegals:

Today, after advocacy lawyers succeeded in arguing their cases before immigration judges, both men have been released from the Frederick County Detention Center and reunited with their friends and family.

"They could have easily been removed from the country, but they have viable cases," said Michelle N. Mendez, a senior attorney at the Catholic Legal Immigration Network who represented both men. "This is why we shouldn't be doing these fast-tracked deportations. If the person has access to competent counsel, it makes a big difference."

But these two illegal aliens had already had their days in court before. As the Baltimore Sun article itself admits, ICE said one was a prior deportee and the other had an outstanding deportation order.

The agents accused Rodriguez of "illegally re-entering the United States after a previous deportation" and Paucar of being an "immigration fugitive with a final order of removal" issued more than a decade ago.

So these illegal aliens arrogantly ignored the hearings and the findings. Then, as is arguably intended by the EOIR, lawyers and immigration judges conspire to simply disregard the laws they don’t like and declare that illegals can ignore deportation orders

These immigration judges violated the law by interfering with the reinstatement of a previously issued deportation order. This illegal activity by could be easily solved by the Chief Immigration Judge, MaryBeth Keller, ordering her subordinates to adhere to the law. But as Keller is an appointee of Loretta Lynch, she most likely agrees with this policy.

But these “immigration judges” are not really “judges”—they are federal bureaucrats, employees of the Department of Justice under Attorney General Jeff Sessions. He should correct or remove the IJs in question and see that immigration laws are enforced against the illegals in question.

From my experience, it is also likely the attorneys for U.S. Immigration and Customs Enforcement (ICE), the Office of the Principle Legal Advisor (OPLA), colluded with the immigration judges to allow these illegals to stay in the country. OPLA offices are filled with sympathizers with illegal aliens. Contact Andrew Kowalczyk Assistant Chief Counsel, OPLA, ICE, Baltimore Field Office, here, and ask him what he is doing about immigration judges violating the law.

The EOIR is designed to fail, as the legal process for deportation continues until the illegal alien wins—as Michelle Malkin (quoting VDARE.com's Juan Mann) once put it).

Ultimately, the solution must come from President Trump and Congress. The EOIR must be abolished and replaced with a policy of summary removal. Judges, like Goldsmith and Watson, who claim the right to set our immigration policy must be impeached.

Otherwise, our politicians should just admit they have outsourced government to judges and bureaucrats.

And then we might begin asking ourselves why we bother with the farce of elections in the first place.