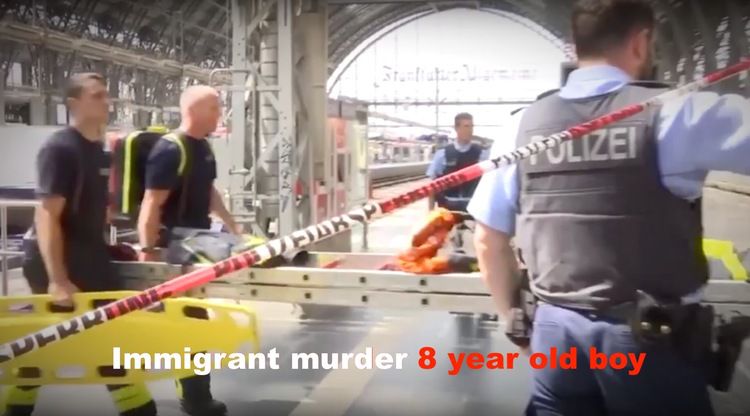 This is the kind of thing that you think only happens in horror movies. A child pushed onto a train. A horrified mother barely escaping death, only to watch her child killed. No motive, no reason behind any of it.

But at least the international press said nice things about Angela Merkel! So really, it was all worth it.

A chilling incident in which a young boy and his mother were pushed in front of a high-speed train by an Eritrean man has sent shock waves across Germany and seemingly rekindled anti-migrant sentiment.

The tragedy took place on one of the platforms of the central railway terminal in the German city of Frankfurt – the nation’s second busiest railway hub. An eight-year-old boy and his mother were waiting for a train when they were suddenly attacked by a 40-year-old Eritrean. The assailant grabbed the woman and the child and threw them on the rail tracks right as the high-speed intercity express (ICE) was pulling into the station.

The 40-year-old woman managed to escape near-certain death as she made it to the pathway between two tracks. She tried to reach out to her son when the train ran over him, a witness told German media. The boy died at the scene...

The perpetrator also tried to force another person onto the railway tracks but his third would-be victim escaped. The attacker then attempted to flee the scene but was pursued by a group of passengers and eventually detained by police outside the terminal.

I'm surprised the German government hasn't arrested those who detained the migrant and charged them with a hate crime. The attack will likely have political ramifications.

Germany's Interior Minister, Horst Seehofer, cut his vacation short due to the incident and was due to address the public on Tuesday. He is set to meet Germany's top security chiefs and discuss "[s]everal serious crimes during recent time."

On Monday, Seehofer pledged that the attacker would be "called to account with all means of the rule of law." However, the minister also warned against drawing premature conclusions about the Frankfurt attack, after his ministry shared that the attacker was an Eritrean citizen.

"I note that some parts of the public have already formed a judgment of this incident," he said, adding that judgement should be reserved until the background of the attack is clarified.

With the German states of Saxony and Brandenburg heading for parliamentary elections on September 1, the apparent attack in Frankfurt is likely to fuel the emotionally-charged discussion about refugee policy spearheaded by Chancellor Angela Merkel.

It will be interesting to see if the foreigner expresses some kind of anti-white hatred as the motive. This has happened in quite a few cases, notably when Brittney Watts was murdered by a black man angered about "white privilege." Unfortunately, this did not lead to a much-needed national conversation about the consequences of the mass media's anti-white rhetoric. This case is also reminiscent of the recent Mall of America attack, in which a black career criminal “randomly” threw a five year old from a balcony, almost killing him.

Of course, there may have been no motive at all, which is in a way even more terrifying. There have been quite a few cases of people being thrown in front of trains in Germany, leading to calls for more security.

On July 20th, a woman was pushed in front of a train at the station in the small town of Voerde, near Duisburg, in North Rhine-Westphalia. The 34-year-old mother-of-one died at the scene.

The 28-year-old suspect, who was of Kosovo Serb origin and identified as Jackson B, was known to police. He is being held in custody and is not thought to have known the victim.

In September 2018, an 18-year-old man pushed a 43-year-old on the train tracks in Cologne following a dispute, yet the victim did not sustain any injuries. The video captured by a surveillance camera showed the shocking crime.

In 2016, a 20-year-old woman died in Berlin after she was pushed in front of an oncoming U-Bahn train by a stranger in another tragic incident.

The problem is that mass immigration puts more unnecessary pressures on already buckling societies. As Robert Putnam found, diversity decreases social trust, even within members of the same ethnic group. Immigration increases demands on social welfare programs, national security institutions, and law enforcement. This in turn increases bureaucracy, taxes, and alienation. Modernity is creating people who hate themselves, their societies, and their identity. The trend is especially pronounced in Germany.

Mass immigration is both anvil and hammer. Foreigners sometimes commit horrific crimes, like the one against this poor child. Yet the larger phenomenon of mass immigration, driven by Big Business, also creates psychologically unhealthy societies that cause people to snap. The world that is emerging is a nightmare, and it’s going to get worse before it gets better.