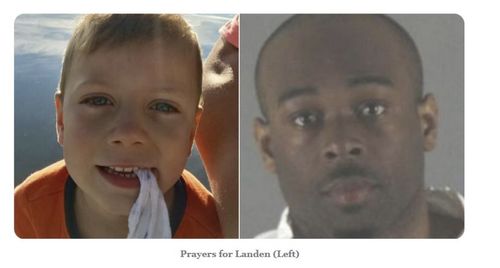 Occasionally, I’ll go back and read an email someone sent me. It’s from the wife of an individual who was murdered by blacks. She simply thanked me for writing about how her husband was murdered and for honoring his life in someway (because few media outlets where it happened even bothered to cover the story). She ended by writing, “Apparently, it’s just okay to murder white people nowadays.”

It was heartbreaking when I read the email the first time and it’s difficult to read today.

But it’s when reading about what happened to Landen Hoffman, a five-year-old white boy, that the impact of what she wrote to me became overwhelming. [Boy thrown over railing at Mall of America remains hospitalized: The suspect, who had no connection to the child or his family, will be charged by noon Monday, police said., Star Tribune, April 13, 2019]:

A 5-year-old boy who fell almost 40 feet after being thrown over a third-floor railing at the Mall of America on Friday remained hospitalized Saturday, police said.

At a noon news conference, Bloomington Police Chief Jeff Potts said the family of the boy, who remains hospitalized at Children’s Hospital Minneapolis, has requested privacy.

The suspect, Emmanuel Deshawn Aranda, 24, was quickly arrested after fleeing to the mall’s transit station, thanks to witness reports and security cameras, Potts said. He was moved overnight from the Bloomington jail to the Hennepin County jail on suspicion of attempted murder and other charges. He will be charged by noon Monday, Potts said.

Potts said there is no connection between the victim, his family and Aranda.

Aranda has a history of mental health problems and had twice been ordered to stay away from the mall, court records show. In a previous criminal case, he told police that “he has some anger issues” after being arrested for smashing computers at a Minneapolis public library.

For all who witnessed the incident, including law enforcement officers who responded to the scene, “this is a tough one,” Potts said. “When you add in the element that this is a 5-year-old child, it’s pretty gut-wrenching.”

The boy’s family lives in Woodbury. A family friend who set up a GoFundMe page to help with the boy’s medical expenses said early Saturday afternoon that his parents are not yet ready to comment publicly. The boy, whose first name is Landen, is in stable condition, “still very much with us and fighting,” he said in a Facebook message.

Organizers wrote on Landen’s GoFundMe page that he is “the sweetest kindest 5 year old you will ever meet. His soul is soft and gentle and instantly brings a smile to everybody he meets.” Within two hours of the page’s creation, donations had rocketed past organizers’ initial goal of $50,000.

Potts said Saturday that police still do not know what Aranda’s motive might have been and that they are “working around the clock” on the case.

Aranda has a long string of arrests and convictions for misdemeanor criminal offenses in recent years, court records show. At the time of Friday’s attack, there was an active warrant for his arrest stemming from a 2017 assault case in Hennepin County.

In 2015, Aranda was issued a trespass notice ordering him to stay away from the Mall of America. He ignored the order and in October of that year was arrested after harassing and panhandling two female diners at a restaurant and throwing drinking glasses at diners, according to a criminal complaint.

He was convicted of fifth-degree assault, trespass and interfering with a police officer. Aranda was sentenced to 30 days in the Hennepin County workhouse and ordered to get a mental health evaluation. He was also ordered a second time to stay away from the Mall of America.

In the past six months, Aranda was charged a half-dozen times with riding public transit without paying, court records show.

In August 2015, he was arrested for smashing computers at the Sumner Library in north Minneapolis.

According to a police statement, Aranda told officers that he became angry after reading something on Facebook and smashed five computers.

“He said he has some anger issues and told the officer that it does not happen all the time,” the police statement said.

A month later, in September, Aranda was back at the Sumner Library, harassing a female library employee. According to a police statement, the woman called police from her car in the library parking lot because Aranda had been bothering her, trying to ask for a date.

According to the statement, Aranda admitted he was stalking the woman and knew where she lived. He also admitted that he knew he was breaking an order to stay away from the library for a year.

Aranda’s case was assigned to Criminal Mental Health Court. He was discharged from custody six months later and placed on probation.

Aranda also has a felony conviction for first-degree damage to property.

Just after 10 a.m. Friday, Tina Hailey of Burnsville was walking with her husband and had just rounded the corner on the mall’s first floor near Macy’s when she heard screams.

The mother screamed uncontrollably and appeared to be in shock, Hailey said.

Hailey, who has a 4-year-old grandson, said the screams and the sight of those working to revive the boy will haunt her. “I won’t forget it. It was horrific,” she said. “I hope he survived.”

On the boy’s GoFundMe page, organizers wrote that Landen “is full of energy and life and enjoys soccer, playing with friends and family and playing hockey with his brother and sister. … [His] family is always so generous to others, they give without expecting in return and are the type of family you always hope live next door.”

He is likely to survive, they said, adding, however, that Landen “has a very long road to recovery ahead of him. … He has many surgeries ahead in his life to try to get back to a normal life for a young, vibrant boy.”

There was an active warrant out for the arrest of the black man who targeted Landen. He had also been banned from the Mall of America on two occasions.

If you’ve ever been the Mall of America, you know white people are a clear minority, with Somalian refugees walking around in Hijabs making one feel as if they were in Mogadishu. Without the 1st world accommodations, you’d be unable to tell the difference as the 3rd world people pass you by.

But go back and read the opening paragraph to this piece.

Did you do it?

Scroll back up and read it. Let it sink in.

Read what she wrote to me again, and how she ended her email.

Prayers to you and your family, Landen. It’s my greatest hope you can hold your brother and sisters hand again.

But please understand and accept the fact this was a racial attack on Landen.

Emmanuel Deshawn Aranda, who targeted Landen, should have been in jail. But we live in a country dedicated to criminal justice reform, because too many black men are in jail (which is somehow proof the criminal justice system is racist). Instead, he was free to roam around Minneapolis…