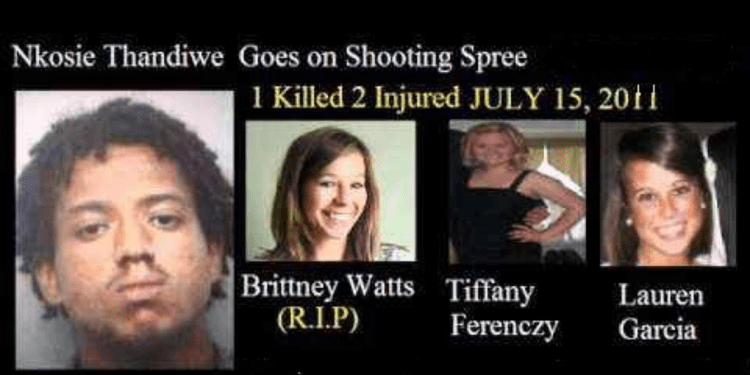 Taking the concept of “white privilege” to its logical conclusion.

This is what Nkosi Thandiwe has done in Atlanta, Georgia.

One white girl is dead; another is paralyzed; another escaped with only injuries to her person.

But the Atlanta Journal Constitution reports that in Mr. Thadiwe has gone to the “white privilege” defense as the reason for opening fire on the three white girls

During his testimony Wednesday, Thandiwe suggested that his reason for even purchasing the gun he used in the shootings was to enforce beliefs he’d developed about white people during his later years as an anthropology major at the University of West Georgia.

“I was trying to prove a point that Europeans had colonized the world, and as a result of that, we see a lot of evil today,” he said. “In terms of slavery, it was something that needed to be answered for. I was trying to spread the message of making white people mend.”

He said the night before the shooting, he attended a so-called “Peace Party” intended to address his concerns about helping the black community find equal footing, but two white people were there.

He even admitted to earlier that day getting angry enough on the job to shoot his supervisor.

“What my boss said to me …,” he told the jury, “that rage almost made me pull out my gun on him.”

A collective groan went up from the victims’ family members when Lee announced early Wednesday afternoon that she would allow a mental health expert to examine Thandiwe overnight and testify the next day as to whether there was sufficient evidence to add an insanity verdict to the jurors’ choices.

He simply told the court that he was “trying to spread the message of making white people mend.” And he did that, by shooting three white girls.

Killing Brittney Watts in the process, an act that Tim Wise (a professional white privilege provocateur, who goes from college to college–collecting big pay checks–denouncing the very people who built this nation) would obviously applaud.

After all, Mr. Thandiwe is an adherent, a proud disciple of the church of white privilege (a religion in Black-Run America—BRA) which so many Disingenuous White Liberals proudly teach is the reason so many non-whites can’t compete in western civilization.

The blood of Brittney Watts is on your hands, Timmy. It’s on the hands of teachers and professors of the men and women throughout America who peddle the propaganda of “white privilege” – for Mr. Thandiwe has just enacted the logical justice in finding ending the terrible reign of ‘white privilege’ — killing whitey.

Lauren Garcia is paralyzed. Tiffany Ferenczy has a scar from the bullet entered her body as a reminder of the true cost of white privilege.

Remember, it was already reported by WSBTV that “race” was a motivation in the Mr. Thandiwe – a black male – decision to open fire on white people:

Channel 2 Action News has learned new information about a possible motive in a deadly midtown shooting from last summer.

Police said a woman was killed and two others injured when a security guard went on a shooting rampage in a parking lot. Channel 2's Dave Huddleston obtained the 43-page lawsuit from the case that was filed in state court April 5. The documents show that race may have played a role in the shootings.

Nine months after the shooting, lawsuits have been filed against the defendant, the security company he worked for, Allied Barton, and the owners of the building where the shooting took place.

They said Thandiwe demonstrated an intensely negative attitude toward another race, which was unnamed. About a month prior to the shooting, Thandiwe had an altercation with a visitor with the parking garage.

Documents state he assailed a visiting courier with racial epithets and had to be physically restrained by company personnel from striking and causing harm to visitors.

Company officials, lawyers and shooting victims declined to comment on the matter.

Odds are the decision by Mr. Thandiwe to open fire on three white girls (killing one in the process) will one day be studied in a college classroom as the only solution to dealing with white privilege, eradicating it once and for all.

Mr. Tim Wise will extol the virtues of Mr. Thandiwe’s actions as the “final solution” necessary in once and for all removing the putrid, pungent scent of “white privilege” from these shores.

And the SPLC will offer him a “community outreach” position.

Brittney Watts is dead, a victim who the establishment will not mourn, for the establishment – the managerial-elite – has gone all in on the idea that “white privilege” is the true bane of 21st Century America.

By using the “white privilege” defense, Mr. Thandiwe has assured himself a place in the pantheon of Disingenuous White Liberal (DWL) heroes, a modern-day John Brown.

But remember this; the blood of Brittney Watts is on the hands of Tim Wise and his ilk – Mr. Thandiwe is an acolyte of your insidious ideology.

And his actions are the logical conclusions of YOUR teachings.