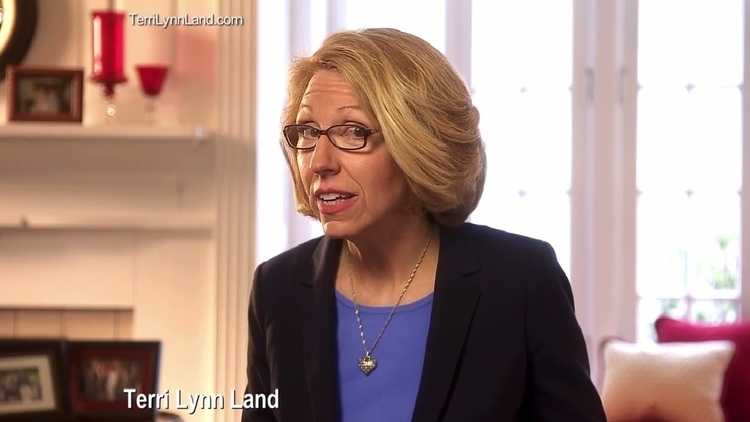 Yes, Virginia (Dare), There IS A GOP War On Women!—Campaign Consultants Prey On Naive Millionairesses Like Terri Lynn Land

The real Republican War on Women™ isn’t about birth control—it’s about GOP consultants convincing bored rich women that they can be Senators if they are willing to spend all their money ON THEM!! The pointless run of Establishment pick Terri Lynn Land is the lowlight of the Republicans' much-touted “wave year” in the 2014 midterms. But she’s not the first and won’t be the last—she’s just more evidence that Conservatism Inc. has run out of ideas and is carried forward by pure inertia and greed.

Why is Land running? Simple—she’s a woman, and she has MONEY!!! Land has put up at least $2.9 million of her own money, and has run on her honorary victim status as a women against her white male Democratic opponent Gary Peters.

But she’s not unique. For example:

McMahon was once celebrated as President and CEO of World Wrestling Entertainment, who helped her husband Vince turn just another wrestling promotion into a dominant force in “sports entertainment,” the industry they practically defined. Of course, this also included putting McMahon and the rest of her family into the spotlight in risqué and borderline offensive spectacles featuring vulgar language, sexual innuendos, and physical abuse. The WWE also rose to its current stature during the “Attitude” Era, when it abandoned its family-friendly and generally patriotic shtick. But wrestling’s audience of mostly blue collar Democrats ate it up.

Yet Connecticut Republicans were persuaded (twice) that Linda McMahon was the perfect representative of their party. And maybe she could have turned her unique background into a strength by targeting Reagan Democrats. But she instead apologized for the very things that made her who she was. The WWE retroactively erased some of its “edgier” past content and reoriented its shows in an effort to make McMahon more family friendly. [WWE Scrubs ‘Dated And Edgier Footage’ Amid Linda McMahon’s Connecticut Senate Campaign, by Nick Wing, Huffington Post, September 14, 2012]

Yet, even though McMahon spent more money than any other person in history to win a federal seat and more than Ross Perot did when he ran for President, she is still back at work selling professional wrestling [Personal Cost for 2 Senate Bids: $100 Million, by Peter Applebome, New York Times, November 2, 2012]

Former eBay CEO Whitman spent more than $70 million to win the primary, crushing a less well-heeled plutocrat, Steve Poizner, who had alarmed the MSM by making a few immigration patriot noises. But then she immediately began the usual pointless retreat on immigration, spending huge amounts of money on futile Spanish language “outreach.” She spent much of the general election campaign fighting with the Republican base. After spending an astonishing $142 million, she lost to Jerry Brown—a target of political satire back when punk rock was cutting edge. [Meg Whitman concedes defeat, asks supporters to unite, by Juliet Williams, Associated Press, November 3, 2010]

What’s going on? Three factors are in place:

Contrary to general (and probably donor) belief, it is entirely irrelevant to political consultants whether a candidate wins or loses. They seem to operate as a kind of guild: once admitted, you are guaranteed work. What matters is that a candidate spend huge amounts of money.

This kind of nihilism can be positively breathtaking to those who engage in politics for ideological ends. For example, Mike Murphy, Meg Whitman’s chief strategist (but only one of her total of 56 “strategists”), made more in a month ($90K) than most Americans make in a year. Asked to explain his catastrophic failure in California, he replied blithely: “It’s a very blue state and getting bluer.” (In fact, California is still eminently winnable for GOP/GAP candidates).

GOP consultants specialize in telling candidates that they need to abandon popular positions, like restricting immigration and taking on racial preferences, in favor of issue-free campaigns that require immense spending on soft-focus image-boosting direct mail and especially television advertising, from which consultants can draw commissions. This requires candidates to raise vast amounts of money from wealthy donors for the benefit of consultants. What’s lost are the small donors, volunteers, and grassroots support that actually attracts, you know, votes.

Despite the poor track record of such consultant-driven campaigns, candidates like Land, Whitman, and McMahon seem irresistibly attracted to “expert” advice. But self-financed candidates—male and female—are an easy mark for such political parasites and actually have a very poor record of winning elections. [Self-financing candidates can’t buy love; wealthy challengers rarely win the elections, by Luke Rosiak, Washington Times, May 30, 2013]

For some reason, perhaps because their guild includes Democrats or because they depend on the MSM, GOP political consultants are profoundly PC. Thus Republican Land has ludicrously tried to get to the Left of Democrat Gary Peters by denouncing him for not paying his female staffers enough. Not surprisingly, no one cares—not even female voters. Similarly, Whitman, despite being a female CEO and being called a “whore” by one of Jerry Brown’s aides, lost women voters by sixteen points. [How Jerry Brown Beat Meg Whitman in California, by Susan Pinkus, CBS News, November 3, 2010]. And despite being a “pro-choice” female candidate, Connecticut’s McMahon consistently struggled to win female voters in her two failed races, with her background in the WWE not helping the effort to rebrand as a PC feminist. [For Woman in Senate Race, Uphill Fight for Female Votes, by Peter Applebome, New York Times, October 5, 2014]

(A possible contrast: Iowa Republican Senate nominee Joni Ernst, currently in a dead heat with Democratic Bruce Braley. When retiring Democratic Senator Tom Harkin called her “good looking,” apparently a sexist comment these days, Ernst formulaically decried the remark—but also used the opportunity to play up her experience as a Lieutenant Colonel in the National Guard and as a state Senator to dismiss the Democratic “War on Women” as “phony.” [Ernst on Harkin Taylor Swift remark: ‘Shake It Off’by Jeremy Diamond, CNN, November 3, 2014] To her credit, Ernst has also identified the Gang of Eight immigration bill as “Amnesty” [Ernst, Braley spar over immigration in first Iowa Senate debate, by Seth McLaughlin, Washington Times, September 28, 2014]

(As Republicans refuse to learn with their endless pointless “outreach” to minorities, you can never out-PC the Democrats and their allies in the MSM. At best, a female candidate can appeal to some moderates and provide a trap for Democrats to fall into, as we see with Tom Harkin. But the idea that Republicans can win the female vote just by running a woman is as misguided as the persistent idea that they can win the black vote by running a black guy.)

Finally, there’s the ideological exhaustion of the Republican Party and its pseudo-intellectual wing, the Beltway Right.

Self-funding female candidates apparently never have an actual reason for running besides their ego, money and the GOP’s perennial ambition to trick the MSM by running a woman or a minority.

Bur money and “me too” identity politics can’t compensate for the lack of a popular program that can appeal to workers and struggling middle class voters.

The result: campaign after campaign full of wonky economist slogans that appeal to the Hollow Men of the Beltway Right and are PC enough for the MSM but have no appeal to those who don’t make enough money to care about upper class tax cuts.

Still, party bosses and greedy consultants eager to keep the gravy train on track have no reason to change the status quo. The parasite has taken over the host. Women candidates who pointlessly blow their fortunes are simply necessary to keep the Beltway Right in business.

Republicans are often caricatured as portraying the rich as somehow “victims.” But by taking advantage of politically-clueless, financially-flush females, Conservatism Inc. has actually found a way to make it true.