Santorum Either Sees Light Or Feels Heat, Tells GOP To Back Off On Immigration 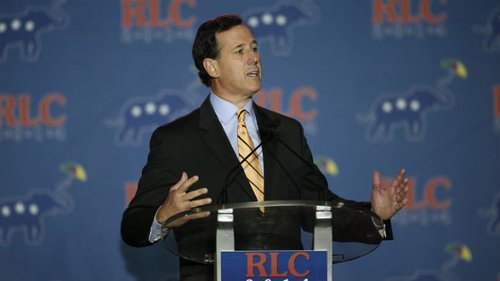 There are still people out there trying to say that Eric Cantor didn't lose over amnesty, but Rick Santorum doesn't believe them.

Santorum to GOP: Back off immigration, By Alexander Bolton, The Hill, June 14, 2014

Former Sen. Rick Santorum (R-Pa.), who is mulling another presidential run in 2016, urged the Republican Party to oppose increased immigration rates, which he warned would depress wages.

Santorum wrapped his comments in broader remarks about the need for the GOP to reach out to middle-class and low-income voters.

Santorum went on to say

He said the GOP doesn’t have to endorse “bringing in two and a half million people a year and give amnesty to 13 million people,” alluding to the reforms of the comprehensive legislation that passed the Senate last year.[More]

Santorum had left the Senate by the time the Gang of Eight bill came up, so it doesn't have his signature.  I wouldn't be surprised if he had, pre-enlightenment, voted for it—he was all over the place on the issue in 2012. (He briefly came out for cuts in legal immigration, but then flinched and backed off. )

And he has an important numerical point to make to GOP: “We can win every businessman’s vote and still lose elections by landslides. We need workers if we’re going to win."

Yes, that's right. In 2005, the WSJ published an editorial attacking those Republicans who believe in immigration enforcement.The WSJ said that they got "the same message from nearly every business executive who comes through our offices"—we need cheap immigrant labor! And they couldn't believe that Republicans would think it's smart politics "to punish their supporters for hiring willing workers."[Immigration (Spin) Control December 9, 2005]

Well, the sense in which business executives are supporters of the Republican Party is that they're donors.

They may also vote for the GOP, but in very small numbers, that's why people keep calling them the "one percent."

I responded to this by saying

OK, Big Business supports the Republican Party financially, but how many votes does the Business Round Table have? A hundred and sixty votes, that's how many. But there are a lot of displaced American workers in the Republican voting base.