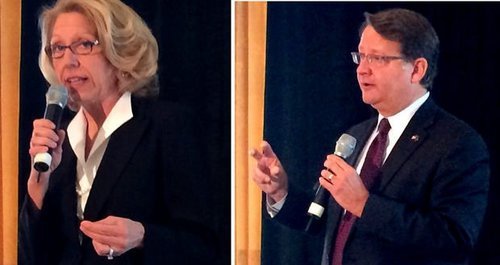 Wait for this to be blamed on Land’s fumbling flirtation with the immigration issue—although this was brief, confined to illegals and contradicted by her open AdelZuck Party enthusiasm for more importing more skilled workers. The real story: the Conservatism Inc. campaign template just isn’t working anymore.

Michigan is the sort of northern state that the GOP (or at least GAP) should dominate, but doesn’t. It is almost 80% white, 14% black. It has relatively few immigrants, but there are constant irritants like the Muslim enclave of “Dearbornistan” and the Obama Regime’s recent attempt to dump Central American kidinvaders into the state.

A 2012 estimate was that illegal immigrants were costing Michigan taxpayers $1 billion a year. Realism about race is encouraged by the Awful Warning of Detroit. Ward Connerly’s anti-Affirmative Action initiative won overwhelmingly, 58%-42%, amid the Bush-blighted 2006 midterms. (This spring it was upheld by the U.S. Supreme Court, but nevertheless Land has not made opposition to racial quotas an issue in her campaign. Nor has she made an issue of same-sex-marriage, despite the controversy when Michigan’s same-sex-marriage, ban, passed even more overwhelmingly in 2004, was stuck down by a federal judge in March, to be later provisionally reinstated by a higher court.).

But Land is losing for the usual Republican reason: utter failure to mobilize the white base. Typical of the political elite’s refusal to report race, the Detroit Free Press’s Spangler burbled on fashionably about the female vote (which Land, refuting for the umpteenth time the notion that Sisterhood is Powerful, is also losing) and EPIC-MRC’s press release about the underlying poll doesn’t break out race, although the data must exist. But the NYT/CBS/YouGov poll taken from October 16-23 showed Democratic candidate Gary Peters with an eight point lead and Land winning the white vote by only two points, 46% to 44%. The Rasmussen Reports poll taken October 20-22 shows Peters with a nine-point lead—and Land actually losing the white vote, by one point, 47%-48%. (Data available to Rasmussen Platinum subscribers).

Land is a terrible campaigner. Despite winning two statewide races for Secretary of State, she has proved so inarticulate that she has now taken to ducking journalists and not publishing her event schedule [Meet the GOP Senate Candidate Even Republicans Love to Hate, by Noah Weiland, ABC NEWS, October 15, 2014).

The Land campaign did run a TV ad back in early August, attacking Peters on illegal immigration and keyed to this summer’s kidinvasion: Senate Candidate Targets Democrat on Immigration, By Alexis Levinson, Roll Call, August 6, 2014. Let the record show that the race did tighten—the Real Clear Politics poll average showed a gap of just 2.6% at its narrowest point, on September 9.

But the ad itself was curiously weak. It focused gotcha-style on Gary Peters’ alleged contradictory comments about the importance of border security, with Land’s own bland position (she thinks it’s important) stated so fleetingly that it was easy to miss which side she was on.

Land’s position even on the Kidinvasion thereafter deteriorated noticeably. Asked about border security and Amnesty in early October, she instead used the opportunity to pound again on the Compassion and I’m-A-Woman! buttons that GOP consultants continue to believe are important to voters (“I’m a mom, I have two kids, and I’ll tell you it hurts my heart with these children who have come across this border.” Betraying the influence of some Beltway Right opposition researcher, Land has even mouthed the same silly argument as the hapless Monica Wehby in Oregon: that her Democrat opponent doesn’t pay his women staffers the same as men.)

Land added of the Kidinvaders:

President Obama has basically told them they could come here illegally. He needs to let them know that that’s not the way it works here. We need to get these children back to their parents and we need to put as much resources and time [as necessary] into making sure that happens. Now if some of these children are here under refugee status they’re welcome to go through that process and we should make sure that happens, but we need to get them back to their parents.

Conspicuously absent, of course, was any expression of Lynn heart-hurting for the American kids (and taxpayers) who have to bear the brunt of this invasion—including the very real possibility of disease. “We need to get these children back to their parents” ignores the fact that many of the parents are already illegally in the U.S. (and that the Obama Regime has indeed been expediting their reunion).

And, needless to say, Lynn has run away from the only legislative branch recourse in the face of this unilateral Obama coup: impeachment.

Asked if she would vote to impeach President Obama, Terri Land says, "No, of course not." #MICalling

Land made her collapse virtually complete while campaigning (why?) with the appalling Jeb Bush:

LANSING, MI — U.S. Senate candidate Terri Lynn Land said Monday that she would consider a path toward legal residency — but not citizenship — for undocumented immigrants as part of a reform plan that would also have to include funding for a border fence.

Land had the gall, or blind stupidity, to insist that she was still against “Amnesty.” In fact, of course, as VDARE.com’s Brenda Walker has repeatedly pointed out, “The Work Permit”—legal status—“is Amnesty.” Unmistakably, Land’s opposition to “Amnesty,” like her support for the border fence, is purely a ritual gesture.

The ignominious results of Land’s boilerplate Conservatism Inc. campaign are disgracefully plain in her answers, or lack of them, to a recent non-partisan questionnaire:

Immigration: Do you support the D.R.E.A.M. Act, which would allow children brought into the country illegally to achieve legal status if they've graduated from high school, have a clean legal record, and attend college or serve in the military?

Immigration: Do you support the comprehensive immigration plan passed by the Senate in 2013, which includes a pathway to citizenship and increased funding for border security?

Even worse, Land failed to answer NumbersUSA’s survey at all, instantly disqualifying her from any claim to seriousness on the immigration issue. But the immigration patriot group does note that she has expressed support for H1-B increases. Her campaign website enthuses about streamlining the immigration process, clear evidence that she will support increased immigration. This in a state with 7.2 % unemployment and a heavy student population facing bleak job prospects.

But there’s good news—for the GOP consultants. Land has had

…no trouble raising money — at least $2.9 million from her own pocket — and at least $15 million spent on her behalf by outside groups. Just this week, campaign reports showed her father, Paul Land, gave $500,000 to a group, Ending Spending, which has spent more than $5 million on her race. With Peters' allies spending at least $17 million on the race, it is already the most expensive in Senate history in Michigan.

So that’s all right then, isn’t it?

In the end, to win a blue collar state like Michigan, GOP/GAP must have to adopt a National Conservative strategy—appealing to American workers economically, by tightening the labor market with an immigration moratorium, and by defending them culturally, against alien influx.

But the GOP Establishment has once again failed to do this with Terri Lynn Land. It increasingly looks like it will never get the message.