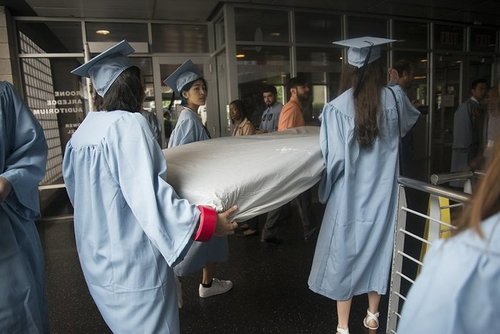 Bringing a mattress to a graduation, in memory of an imaginary crime

The lying leftists at Salon still refuse to report that Paul Nungesser is not guilty. Nungesser is the German student at Columbia falsely accused of raping hoaxtress Emma Sulkowicz, who has carried a mattress around campus as part of a bogus art project.

Salon pretends Nungesser might have done it, tossing in "alleged" in its story protect itself. [Alleged rape survivor Emma Sulkowicz carries mattress to graduation, May 19, 2015]The writer, Jenny Kutner [Email her] does not report that the police and school cleared Nungesser. Nor does she  mention that Nungesser's lawsuit against the school [PDF] totally destroys Sulkowicz's insane claims. The messages the two exchanged show Sulkowicz to be an enthusiastic sexual athlete, and not just with Nungesser.

Nungesser should sue Salon and any other publication that continues to pretend his innocence is in doubt.He should also sue Sulkowicz. If he doesn't, she'll never stop lying about him.