How could the systematic rape, beating and murder of hundreds of its young women not bring any country’s government crashing down, with hearings, trials, and executions? But in Britain the exposure of the “worst ever” sex grooming scandal is barely generating any notice [Britain’s ‘worst ever’ child grooming scandal exposed: Hundreds of young girls raped, beaten, sold for sex and some even killed, by Nick Sommerlad and Geraldine McKelvie, Mirror, March 11, 2018]. Authorities ignored reports of abuse over a period of forty years—because of fears of, guess what, “racism.” And the allegedly “Conservative” British government is responding by cracking down on activists who are trying desperately to save the country—and blocking the entry of allies who simply want to give speeches about European parallels

The indifference of the British government and Main Stream Media to what is now an epidemic of abuse throughout the country cannot be overstated. Sure, some British publications, including the Telegraph are investigating the story [Telford MP calls for inquiry into ‘extremely serious and shocking’ abuse in the town, by Harriet Agerhold, Independent, March 11, 2018]. But thus far the state-owned BBC has barely mentioned it. (One online article from BBC Shropshire, with no mention of “Asians”, Muslims or Pakistanis:  Investigating child sex exploitation in Shropshire By Andy Giddings BBC Shropshire, March 11, 2018. ) Instead, the BBC is far more interested in spreading wild conspiracy theories about Vladimir Putin, who is poised to win another term as president of Russia.

Yet despite Putin’s authoritarianism, it’s increasingly difficult to argue that the United Kingdom is more of a “free society” than Russia. Would Russian authorities be deliberately importing hostile foreigners, sanguinely permitting them to rape children, arresting anyone who tries to fight back and then banning criticism as illegal [Rotherham dads were arrested after tracking down abusers, The Star, August 27, 2014].

Just as the September 11, 2001 terrorist attacks actually meant nothing to those who govern America, the exposure of the earlier Rotherham grooming scandal meant nothing to those who govern the U.K. And exactly as 9/11 paradoxically meant Islam suddenly became beyond criticism, the Rotherham scandal, which was first exposed by the “far right” British National Party, has only led to further crackdowns on the indigenous British people.

After his original engagement to speak at Young Independence’s Free Speech Conference was shut down thanks to Antifa threats [YI Free Speech Conference Cancelled Due To Far Left Security Risk, by Reece Coombes, Young Independence, March 5, 2018], Sellner decided to give his speech at Speaker’s Corner at London’s Hyde Park, celebrated for centuries precisely because anyone can speak there…until now

Reportedly Sellner was detained for “inciting hatred/tension between local communities.” The wording is significant. Rather than a real nation, the United Kingdom is now just a collection of “communities,” mutually hostile and always on the brink of conflict, with a weak government and contemptible law enforcement doing its best to keep the entire failed system stumbling along a bit longer.

Activist Tommy Robinson reports that Sellner and Pettibone were banned partially because they were going to meet with him. British authorities allegedly identified him as a “hate preacher”

About to interview Brittany & Martin about their ordeal. They have brought the home office documents which accuse me of being a ‘racial hate preacher’. Full report coming soon on https://t.co/n58aV1eLyN pic.twitter.com/aNyG6Ahe4s

Of course, actual “hate preachers” in the United Kingdom, who preach murder of the infidels and the establishment of a caliphate, are not just welcomed to the United Kingdom but have their activities subsidized [Europe: Jihadists Exploit Welfare Benefits, by Soeren Kern, Gatestone Institute, August 30, 2017].

Also this weekend, Tommy Robinson was attacked by a large group of Antifa on a public street in London. Note that the Daily Mail, allegedly a right-leaning paper, essentially cheers on the attack and identifies Robinson as a “far-right thug” [Big whack and fries: Moment firebrand far-right thug Tommy Robinson ‘brawls with masked left-wing extremists’ outside McDonald’s, by Charlie Bayliss, March 11, 2018].

Yes, Leftists and some anti-white extremists are also banned from entry to Britain. But this is a false comparison—these figures are far more radical than Martin Sellner and Brittany Pettibone.

For example, one figure who was banned by the U.K. almost 20 years ago was Nation of Islam leader Louis Farrakhan. In 2001, he had a lawyer who tried to get his ban overturned—none other than Sadiq Khan, now Mayor of London. Ironically, Mayor Khan now spends his days trying to get the U.K. to ban President Trump. [London Mayor Tried To Overturn U.K. Ban On Farrakhan, by Art Moore, WND, June 6, 2017]

And remember this crackdown is occurring under the nominally “Conservative” government of the hapless Theresa May. May became Prime Minister after Brexit and had a real chance to rebrand the Tories as the party of National Conservatism. But instead, under May, the Tories have become an utterly pointless party, endlessly virtue-signaling against the “Far Right” while offering nothing to dissatisfied British workers, botching Brexit, and generally acting as the U.K. equivalent to Mitt Romney.

Not surprisingly, the Tories are staring down the barrel of an electoral blowout [Local elections poll: Theresa May ‘could lose in three of her flagship London boroughs, by Joe Murphy, Evening Standard, February 21, 2018]. Old Left crypto-Communist Jeremy Corbyn’s Labour Party, buoyed by the minority vote, is now in a commanding lead over the Conservatives [Support for Labour is surging again as Corbyn’s party takes a 7 point lead over the Tories, by Shona Ghosh, Business Insider, March 11, 2018].

The U.K. may soon return to the crisis of the 1970s pre-Thatcher days—only this time there will be the vibrant addition of Islamic rape gangs and suicide bombings, in addition to crushing levels of debt [Britain’s ‘unsafe’ debt must come down, Hammond warns, AOL, March 11, 2018].

These events come amid signs of heartrending nostalgia about World War II, exemplified by films such as Dunkirk and Darkest Hour. Only the most deluded can now maintain Great Britain “won” World War II. After all, if Churchill walked the streets of London today, he’d be arrested, not put in 10 Downing Street.

Unique in the Occident, there is now not much of a nationalist political force present in contemporary British politics, following what even Nigel Farage describes as the collapse of UKIP [Exclusive: Ukip is on the brink of collapse but I back Henry Bolton to continue as leader, says Nigel Farage, by Christopher Hope, The Telegraph, February 15, 2018]. It’s tempting to take the advice of the more interesting of the Hitchens Brothers, Peter, and suggest emigration [The Laura Perrins interview: Peter Hitchens on why it is time to emigrate, by Laura Perrins, Conservative Woman, March 9, 2016]. (It worked for VDARE.com Editor Peter Brimelow!) 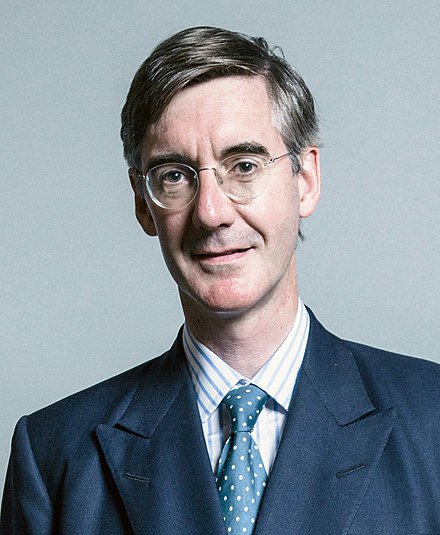 Yet there are British Identitarian activists who are still working to reclaim their homeland—showing remarkable courage in the face of a tyrannical government, a viciously anti-British MSM, and the violent Antifa groups that operate as the paramilitary wing of the System.

One bright spot in the mainstream political system: the emergence of Jacob Rees-Mogg (right)  as a possible new leader [Don’t underestimate Jacob Rees-Mogg – he is the Corbyn of the Conservative Party, by John Rentoul, Independent, February 3, 2018].

Of course, the UK Conservatives need a real rallying cry to justify why they deserve to stay in office. As Jacob Rees-Mogg has been personally menaced by Antifa mobs, perhaps he’d be amenable to a suggestion from an American (me): How about First Amendment style speech protections for the U.K.?

At this point, it would be a huge advance just to Make Britain Britain Again.